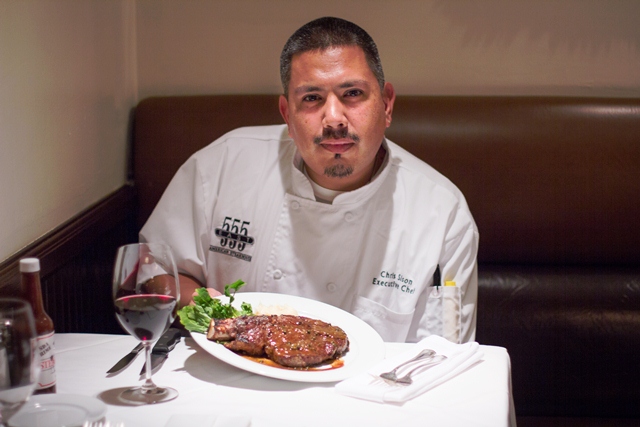 I don’t consider myself a foodie-snob, but I like to haunt the Instagram accounts of my favorite chefs just to see what they are working on next, or the places they’re going, or the places they’re frequenting when they’re not creating mouth-watering-goodness of their own. And, on top of my list sits Chef Chris Sison when I’m looking for institutional culinary knowledge.

Last time I spoke with Sison, he was the executive chef at the steakhouse restaurant 555 at the historic Federal Bar in Long Beach.

I recently ran into the young chef at South Bay Pavilion mall, to catch up and also bend his ear about what he was paying attention to.

To my surprise, I learned he had left 555 for Orange Hill in the City of Orange, an upscale hilltop venue dotted with koi ponds and waterfalls with a steak and seafood menu and a long wine list.

My interrogation begins by exploring his best destinations for date night — the places that help him keep it spicy with his wife; they’ve been married for eight years and in October they’ll celebrate 17 years of togetherness.

“Keeping it hot and spicy usually doesn’t involve much more than getting away from the kids — my son and the teenage sister in-law who lives with us. A recent graduate from San Pedro High School, she babysits for us. Date night for us could be an early morning run to breakfast at Maya Restaurant in downtown Wilmington,” Chris said.

Chris noted that the restaurant was originally located on Pacific Coast Highway and Fries before moving to its current digs on Avalon and D Street.

“They’ve been around for 45 years and are known for their green chile. They just moved to their downtown restaurant ­— a little smaller but they still have the same quality of food. I just posted to my instagram, a dish of theirs called El Pobre  which is two tamales and green chile with been and hand-cut potatoes and two fried eggs over the top. I can’t wait to go back.”

Because everything revolves around his son, which could be after he goes to school, when he’s at little league baseball or soccer practice, date night could literally be a lunch date in Carson.

“I like to support the mom-and-pop Filipino restaurants,” Chris said. “It’s going to either be D J Bibingkahan or Nita’s. The reason is because they are both well known for their chicken adobo and their nichan koali.”

“Chicken adobo is your classic soy sauce vinegar base [with a] little bit of bay leaves in there. It could be chicken, it could be pork. I’ve never seen beef [in the dish] before.”

I like going to Nita’s for their nichan koali. It’s pretty much like carnitas, fried pork with very crispy skin and very tender meat. It’s like chicharrones. That’s pretty much the lunch box around here.”

If Chris is really trying to step it up a notch, Berth 55 is his go-to spot.

“It’s a local and all the fish comes right off the boats around here,” Chris said.

Near the 710 Freeway and Pico Avenue, the grilled fish of various catches and jumbo shrimp served in large quantities with a side of rice and coleslaw makes Berth 55 a Los Angeles Harbor destination.

“That’s where a lot of longshoremen go,” Chris said. “It’s an everyday eatery for everyday people.”

When I asked what restaurant he’s almost guaranteed to post a food picture, a good sandwich

Chris cited BusyBee and their “belly-buster” sandwich made with roasted chicken with pastrami on top.

“That could be a nice picture, but another nice picture would be Diana’s in Carson. I love their red chile burrito.

It was through this conversation I began to pick up on a running them on Chef Chris’ selections — a bit of insight into why town favorites stay town favorites, if you will.

“It’s the consistency,” Chris said. “The food at these places are consistently good every time I go. These are places at which I formed memories as a kid and aim to create more memories my own kids.”

It wasn’t lost on me that he and his wife have to squeeze in their quality time where-ever they could fit it in. I pushed a little further asked him what this night time dinner choice for date night.

“Back in the day, it was Blue Water Grill,” Chris said. “That was my first job after I graduated from culinary school. My wife and I made a lot of good memories there.”

Consistency and quality — a restaurant can’t go wrong with that.