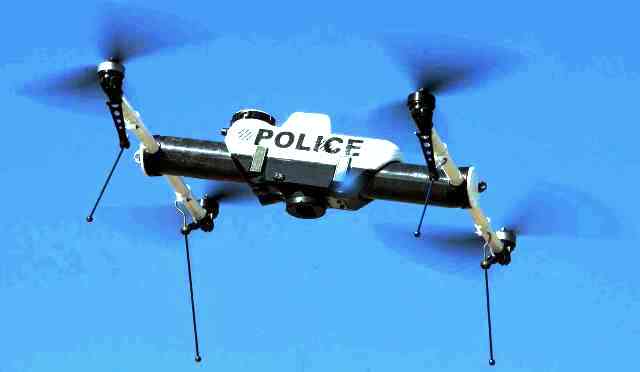 Police fail to give adequate public notice for meetings

Community groups were taken aback by the lack of advance notice for community meetings Aug. 24 in Westwood, Van Nuys, Griffith Park and San Pedro to address a pilot drone program for use by the Los Angeles Police Department’s SWAT team.

The timing of the Aug. 23 meetings was criticized by residents and advocacy groups. The Stop LAPD Spying Coalition, which has been among the most vocal, sent a letter to Mayor Eric Garcetti on Aug. 22, accusing the LAPD of failing to alert the public about the meetings in a timely manner. The group also took issue with the fact that none of the meetings were hosted in the southern or eastern areas of Los Angeles or in downtown.

Jamie Garcia said the Stop Spying Coalition first heard of the hearings at an Aug. 8 police commission meeting. Garcia noted that her organization monitored the media for any information regarding the hearings but didn’t hear or see anything until an Aug. 22 alert on KPCC. Others saw a notice in the Daily Breeze during the same time frame. No advance notice was given out to the neighborhood councils.

Garcia noted that the biggest concern is the further militarization of the police department. Garcia also noted there are communities in other parts of the country that have not only decided to allow their police departments to acquire drones but to arm them with both lethal and nonlethal weapons.

Garcia was referring to states such as North Dakota, which passed legislation in 2015 to allow their police departments to acquire drones equipped with less-lethal weapons, such as tear gas, tasers and bean bags.

Connecticut’s legislature introduced a bill that would equip drones with lethal weapons. The bill, House Bill 7260, moved overwhelmingly out of the Judiciary Committee this past March but failed to pass the state’s House and Senate before the session ended in June. It’s unclear if the bill will make it to the governor’s desk.

The LAPD first obtained the unmanned aircraft three years ago, when Seattle police unloaded a pair of Draganflyer X6 drones that stirred criticism in their city. The controversy accompanied the drones to Los Angeles.  After public outcry, the devices were locked away and never flown.

The LAPD destroyed the Draganflyers this month, just before the department revealed it wanted to test different drones as part of the pilot program.

Mission creep was also a major concern. Garcia noted that when SWAT was initially formed, it was only intended for hostage situations. Now it is also being used to execute search warrants.

Nadia Khan blasted the drone as a non-solution and called out the LAPD for its lack of outreach and not holding any of the meetings in areas that has the most police presence, i.e. East Los Angeles and South Los Angeles.

Khan noted that predator drones are being used at the border and other theaters of war, firing on targets at funerals and weddings in the Middle East. Once the program starts, she cautioned that it will lead to drones that kill [domestically].

Speaking during public comment as a former Central San Pedro Neighborhood Council president, Random Lengths News publisher James Preston Allen noted the department is going to receive significant push back if it doesn’t talk to the community. It will be like the backlash city governments received for the road diets that were installed in Playa Vista.

Allen also suggested a possible solution: trading out police helicopters for the drones. Zarcone said that he hasn’t seen any evidence that the drones could replace all the functions police helicopters serve, but he begrudgingly acknowledged after some pressing by Allen that it is possible, in theory at least, to engage in such negotiations with the community.

Coastal San Pedro Neighborhood Council member Bob Gelfand, representing only himself, noted that the War on Drugs has been used as an excuse for every kind of bad conduct initiated by government. Combined with the LAPD’s brutal past, he said it was understandable that there would be distrust.

There were about as many LAPD officers present at the meeting as there were constituents.

SWAT in the Western Division would use the craft in limited circumstances.

The unmanned craft can see areas obstructed from view by trees and potentially dangerous building areas. Drones also can be used at times when helicopters can’t be used, such as indoors.

The LAPD’s proposal to fly drones during a one-year pilot program is still in the early stages — the civilian police commission must sign off on both the pilot program and a policy for testing the drones before any are flown.

In response, Zarcone said he understood the public’s critique, but, “All I can tell you is they will only be used for limited tactical situations.”