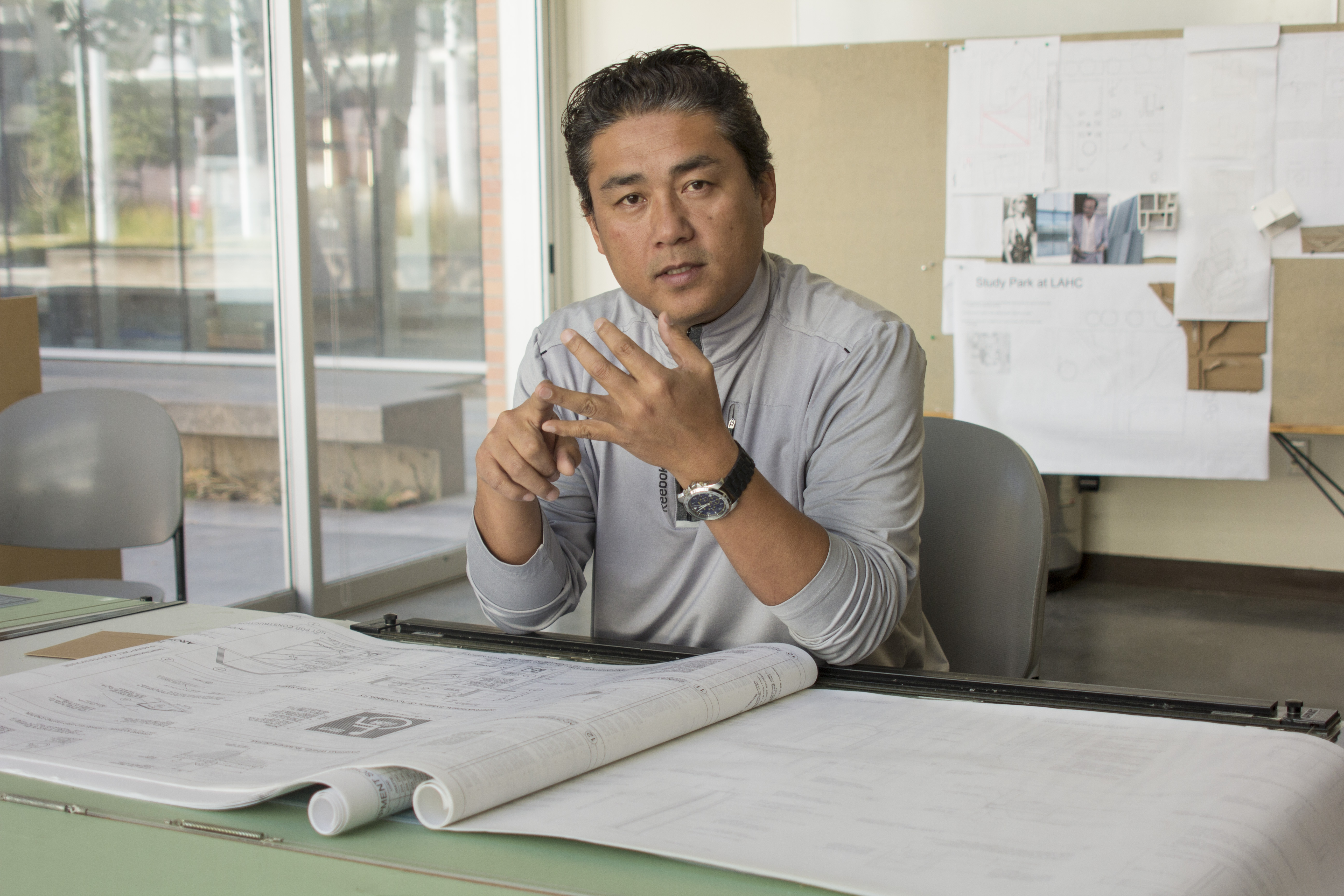 Students who get a credential or degree from an accredited university or trade school are supposed to be able to find jobs. These days, students are caught in a catch-22. Employers require candidates to have work experience in addition to their credentials.

Michael Song wanted to solve this problem, at least for the students who completed Los Angeles Harbor College’s architectural program.

Song, who is the chairman of the department, said about half of his students transferred to universities.

“The other half don’t go for a variety of reasons: family, money, time,” Song said. “There [isn’t] a market for students who do not have a bachelor’s degree or experience. Now, if they have experience, that’s another story. But coming out of junior college, who is going to give them that experience?”

Song recognized another problem: consumers with small construction projects couldn’t afford to hire professional architects. Most architects design libraries, government buildings and other large scale buildings. But if a consumer just wanted to add a bedroom or a bathroom to his or her homes, most architects won’t take the job because there is just not enough of a profit margin.

“So, often times, the consumers turn to drafting services or drafters and some of them do not have the experience or expertise of an architect,” Song said.

After 15 years of teaching at the community college, he decided to do something about it.

“I thought, ‘What if I could create an entity that would be directed by myself, who is a licensed architect, provide consumers with a licensed architect that could help them through their project and also provide an opportunity for my graduating students to gain work experience?’” he said. “So that becomes a win-win situation.”

He invested about $120,000 toward equipment and an EZ Plans franchise that he plans to use to give his former students experience. EZ Plans is a professional services business that offers cost-effective architectural services. According to its website, “the company was founded on the belief that many homeowners are being excluded from their home improvement dreams.” The company offers set prices on most projects.

“The reason why I was interested is because they identified the same needs that I felt was lacking in the market,” Song said. “So, it just happened to be a good fit.”

“But for me it is really about getting my students more work experience and…providing the community with a professional level of expertise,” he said.

The Way It Works

The business model is simple. Clients call EZ Plans’ corporate office, which fields the call and finds a franchisee who services the client’s area. EZ Plans contacts the franchisee, who in turn, makes an appointment with the client. After an interface, the franchisee assesses the project and determines whether it is a project that can be undertaken.

“Obviously, we are not looking for huge projects,” Song said.

Song and his former students would be in charge of drawing the house as is, do research with the city and the zoning department, then provide the client with a design solution before drafting actual blueprints. Once they are submitted to city and a permit is issued, their job stops.

Song plans to work with students who have graduated from the architectural program at LAHC and supervise the projects.

“The idea is that they have graduated,” Song explained. “They don’t really have a place to go in an architectural office because they don’t have experience. So, those are the students who I will take. I will give them real-world experience. Of course, they’ll get paid for that job, too.”

Song and four of his former students are taking on their first project in Downey. For now, they are looking for a space where they can do their work. The former students will be working as independent contractors, meaning they are working out of their individual homes.

To ensure that they are paid fairly, Song’s former students are working under a consultant agreement through the EZ Plan franchise. In essence, Song will be treating his former students as professional consultants and he will be overseeing the work.

“Whatever is left will cover my overhead,” Song said. “Clearly, I’m not doing it as a money-making venture.”

He envisions his project would work through a cycle of two to three years. His former students will work with the franchise, gain experience and move onward, making way for new sets of students to become part of the franchise project.

Although the workforce involved in the EZ Plans franchise is comprised of Song’s former LAHC students, the school itself is not involved in the project due to liability concerns.

“It is a huge undertaking,” Song said. “I debated doing it for many, many years and I certainly don’t need the headache of trying to run a business. But there was just such a need.”

“My students spend two to three years with me. I get to know them very personally. I am committed to them in teaching them and educating them.… But they can have that opportunity if they can go out and say, ‘Hey, I have three years of real-life work experience… and the degree.’ Then they have a fighting job at getting a real job at an architectural office.”

Beyond the technical skills they’ve learned at school, the franchise offers his former students an opportunity to gain professional skills on the business side of running an architectural office.

Song expects his level of involvement with the franchise to lessen within two years. His goal would be that the four former students he is taking under his wing will become project architects, who in turn will do most of the business management.

“Hopefully, the business generates enough income for all four of them to be happy,” Song said. “Then, all the other students will filter in.”

Of course, he won’t be able to remove himself completely from the business, because he is the licensed architect.

As far as his investment, Song doesn’t foresee a return for at least four to five years. That’s OK, he said. As long as the business sustains itself, he’s happy.

“My hope is that community understands the intent of the business,” he said. “We are really trying to service the community. In turn, the community will service our students by giving them valuable professional experience.”