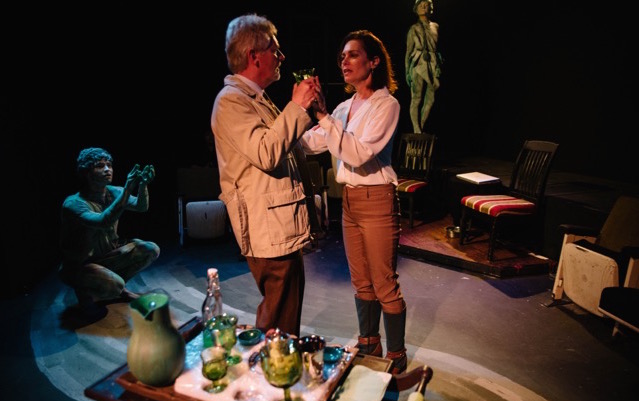 The world had to wait an extra half-hour to be introduced to Fengar Gael’s Opaline (A Delirium for a Parched Planet). Technical difficulties, the two-dozen audience members were told. Life in a black box can be a challenge.

The Garage Theatre has volunteered for a variety of challenges during their 15 years, taking on works that push the limits of what such a small outfit is equipped to handle. When it pays of, it can pay off big, such as the Garage’s version of Trey Parker & Matt Stone’s Cannibal! The Musical a few years ago or last season’s first-ever staging of Tom Stoppard’s radio play Darkside. The latter brought one of Stoppard’s representatives from England to see what the fuss was about and earned the Garage official “world premiere” status from the Stoppard camp.

Opaline isn’t Darkside, but Gael would do well to follow Stoppard’s lead and recognize the Garage’s savvy expansion of physical elements in her script, because Opaline is a better play on the Garage stage than it is on the page.

While investigating matters related to the discovery of the corpse of a woman who was roughly 160 years old, forensic anthropologist Dr. Hargraves Moss (Allen Sewell) is led to the estate of Gaston Verdante (Adam Brooks), a dissolute but masterful painter whose domestique Opaline (Josephine Black) appears to be a younger version of the decedent. But Moss makes two discoveries of greater importance. One is the absinthe that Opaline excels at making. The other is Circe, preternaturally represented by the statuary of Verdante’s precocious young cousin Bibi (Cassandra Bell).

Opaline has some cutesy fun with elements of noir and la vie bohème. The dialog is often pretentious, but that’s part of the gag. While the humor didn’t as well with me as it did for some of my fellow theatergoers, the characters’ growing enthusiasm for absinthe each time it’s offered does get funny.

What lifts Opaline above the words on the page is the Garage’s expansion of the role of Circe. Portrayed by Gregory Ceseña, Erin Grissom, and Jeffrey Kieviet and gorgeously costumed by Cat Elrod as ensouled scupltures, director Caprice Spencer Rothe and choreographer Ashley Elizabeth Allen show the Greek goddess as explicitly controlling a great deal of the action, including the characters’ perceptions and motivations, despite Circe’s not even being listed as a character in Gael’s script. It’s a strong choice not only contextually, but it gives the play a distinct visual element it sorely needs. The three-sided set, which runs behind the audience on two sides (part of the fun of seeing multiple shows at the Garage is to walk each time and reorient yourself to each new set-up), furthers this effect, as does Yammy Swoot’s lighting design.

The coordination between Ceseña, Grissom, and Kieviet is perfect. By turns they strike poses across the theater from each other, next to each other, and as a single unit, embodying both statuary and animating the paintings within the empty (i.e., to the audience) frames that line Verdante’s parlour. They effect set changes and ply the characters with absinthe, then dance as the characters become increasingly intoxicated. They bring to the fore questions of what is hallucination and what is reality. All of this is achieved with grace and strength. Allen couldn’t have done better with the movement element of Opaline, and she couldn’t have chosen a better trio to flesh out her conception. If anything, we want more of it. The penultimate scene of Act One, too long as written and without a Circe in sight, really drags. When it comes to scene changes, on occasion the Circes are helped by other actors, which is a miscalculation. Yes, the changeovers would take longer were it just the Circes, but giving all of the changeovers music (inexplicably, some take place in silence) and letting the Circes do their balletic thing would be playing to this show’s strengths.

As for the rest of the cast, they have found their respective voices, but on opening night they had yet to imbue the stylized dialog with the conversational tinge it needs to work as well as it can, seeming to be recalling their lines rather than reacting and forming replies. Some of their best moments came on the rare occasions when a line was slightly flubbed. Those little pauses and stammers—and more importantly, the spirit of such moments—can be highly effective. Expect this tinge of naturalism to spread as the run progresses and the cast settles into their roles. Presumably they’ll also iron out glitches like one character’s miming (not very well) taking pictures with a cell phone that is clearly off (which stood out as a gaffe even before a later scene in which a different character actually takes pics).

Opaline (A Delirium for a Parched Planet) is nothing if not a flight of fancy, a fever dream played for laughs. As such, the journey is more important than the message. To whatever degree the journey here is worth taking, it’s far more so in the green light of the Garage’s attempt to drive it forward.