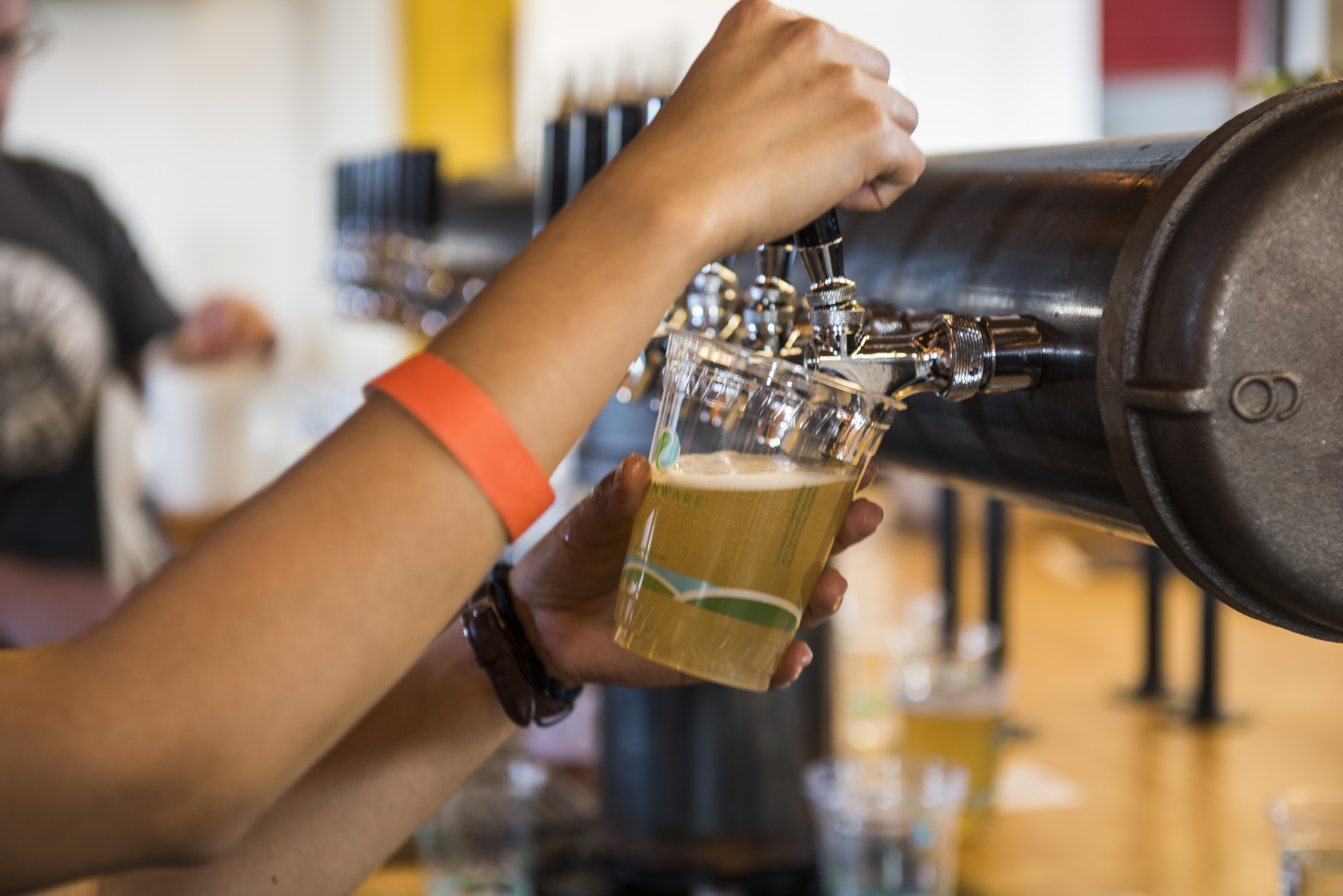 Most were of the mindset, “I’ll believe it when I see it,” but it has finally happened. After years of delays and construction, the highly anticipated Brouwerij West opened its doors Feb. 27. The grand opening was nothing short of a party.

For most of the day, at any one time, the Brouwerij West and Crafted warehouse lots were filled with about 1,500 people. At the end of the day, the number of attendees tallied up to 4,500.

I’m still recovering from the copious amount of beer and snack intake that occurred Saturday. Here’s what you missed and here’s what to expect going forward.

The brewery, which you all know by now, is in one of the coolest buildings of all time— a massive World War II-era warehouse in the Port of Los Angeles, boasts a five-tank brew house, bottle shop, tasting room and Belgian-style beer on tap.

I personally don’t know everything there is to know about beer, but I can tell you that I had little to no problem enjoying the first of the batches that rolled out.

Brian Mercer and David Holop, the magical duo behind the full-production craft brewery, have had tons of visitors in recent weeks for pre-tastings, but Saturday was really meant to be a celebration.

Four food trucks and several local bands including Bombón, Crow Baby and The Underground Railroad to Candyland fed and entertained the crowds of people.

Construction challenges proved to be the main culprit behind the lengthy grand opening delay.

What started as a 16-week project went on for 42 weeks, and while it is not registered as a historic building, it is very old. Parts of the building aren’t level— and that proved to be more than a challenge, but obviously well worth the wait.

The inside is gorgeous and the space is expansive. The glowing strings of bistro lights illuminate the stunning space, giving it a rather charming ambiance.

Oh, did I mention that this almost didn’t even happen in San Pedro?

As it turns out, the brewery was originally intended to be in Long Beach, but Mercer and Holop saw the potential and ran with it.

As a native to the area, I can say that we’ve certainly been waiting for something like this to hit San Pedro—it deserves to be a destination spot and this brewery will only add to the appeal.

OK, so what about the beer, right?

Forgive me, but I don’t know a ton about beer or the whole process, so this called for a bit of research, which basically means I had to read a lot about beer and then drink a whole bunch of different beers (for research, of course). As it turns out, I tend to gravitate towards sour beers. So imagine my surprise to find that Brouwerij West has a sour beer called Super Orange.

It’s made from more than 500 pounds of sour oranges from Northern California.

At the moment there are six beers featured and most are saisons. For those of you who don’t know (I didn’t either) saison is the French for “season.” They are meant to be refreshing, highly carbonated and tend to be fruity or spicy.

Originally this pale ale was brewed in farmhouses in Belgium in the cooler months and intended for drinking during the warmer months of summer.

They have a blackberry saison called Dog Ate My Homework and it is totally refreshing—fruit forward but not sweet and very drinkable. The Bitter Blonde was another one of my favorites—hoppy, bitter with a dry finish.

Here’s yet another awesome tidbit about the beer: the bottle art is rad. All of the bottles feature different artists and they are awesome. I’m a very visual person and if I don’t know a ton about a product in the beginning, I tend to lean towards whatever is aesthetically pleasing. I think most of us can attest to that. I mean, consider going into any store to buy something. How long do you stare at a shelf and then just end up grabbing something familiar or something that looks cool? If I am experimenting with a new product, I opt for the cool packaging.

And yes, there was talk about adding a restaurant to the space and yours truly will happily keep you updated, but it looks like we’ll have to wait on that…for the time being.

For now, the brewery is open from 4 to 8 p.m. on Fridays and noon to 8 p.m. on Saturdays and Sundays. It’s family, pet and skateboard friendly.

Gina Ruccione has traveled all over Europe and Asia and has lived in almost every nook of Los Angeles County. You can visit her website at www.foodfashionfoolishfornication.com.