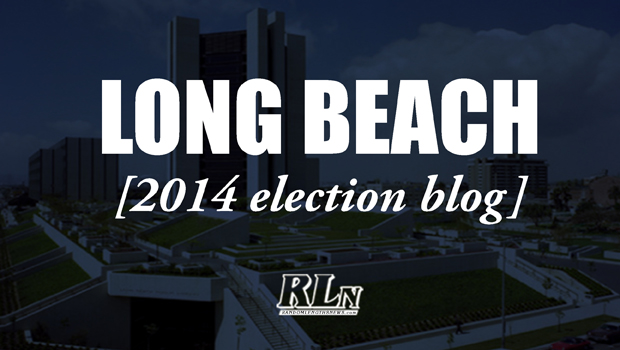 Schipske was the lone vote against declaring a state of emergency that would allow for simple majority of voters to pass Measure I. Measure I, was a $551 million parcel tax that Mayor Bob Foster promised would be spent on infrastructure. But to be implemented, the city charter required Long Beach voters to approve Measure I by a two-thirds majority, unless the city council unanimously declared the situation constituted a state of emergency. Voters approved Measure I by a 52 percent margin, but falling short of the two-thirds, it did not pass.

“Council member Schipske, please explain why you didn’t vote for the state of emergency that would have enabled Measure I’s passage,” Wielenga requested.

Schipske explained that the issue was railroaded through. 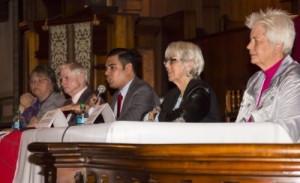 “First of all, it wasn’t an emergency,” she said. “The other difficulty with this particular parcel tax is that it was not specified in the list of the projects that were to be funded by your parcel tax, which by the way also didn’t have a sunset provision. So, it could go on forever and ever and ever…. But what was stuck at the end was wetlands. And it was because a real estate transaction was in the making behind the scenes to pay Tom Dean almost $22 million and that was what I objected to.”

Lowenthal also found herself defending her record. In 2011, her vote helped dissolve the redevelopment agency at the urging of Gov. Jerry Brown. She said several representatives resisted.

“Two years ago the state had a $26 billion deficit,” she said. “Today, we have over $1 billion surplus in our last budget…. So, we had no right to continue a program that was hurting the majority of the community.”

The alternative idea was to keep a very small portion of redevelopment.

Garcia took the opportunity to promote his support of bringing down the Long Beach breakwater as a means to spur the economic development of the city.

“I really believe that one of the single most important things we can do to support economic development is to restore the shore and bring back the waves,” Garcia said. “We have the largest piece of unused beach park in the entire state of California, adjacent to a city and a downtown.”

However, Schipske called him out on the matter.

“We got to stop pandering about the breakwater folks,” said Schipske, citing the Port of Los Angeles and the Los Angeles River as factors that may impede that vision. “It may not be feasible to be able to take that breakwater back and to have the waves that we are talking about.”

Garcia said he’s had conversations with the Army Corps of Engineers, which he said does believe that restoration can take place.

“Is it ever going to be like it was? Of course not,” he said conceding to the imperfection of his vision. “And, the reality is, particularly on the eastern portion, our top priority is the protection of homes…. But there are things that we can do of which lowering part of it, putting holes in it that can change the shoreline.”

Otto sided with Schipske, restating that the Army Corps of Engineers has not said anything can be done but to do a study.

“To say that there is a plan out there and this is going to solve all our economic problems, is a wish and not a plan,” he said.

Otto touted his economic plan as the solution for the city’s problems.

Another point of contention was the proposed construction of a new Civic Center.

In 2005, studies came out that Long Beach City Hall was seismically unsafe. To top it off, the library, which is adjacent to City Hall, also was found to have roofing issues.

The solution, or so it seems, by how the council has been acting, is requesting proposals for private-public partnership to build a new civic center, which would take about four years to build. The informal proposal is reminiscent of the George Deukmejian Courthouse, which ended up costing more than estimated.

“Public-private partnerships don’t necessarily work and they’re not good models from around the country, even around the world, for the mayor and council to look at,” Lowenthal said.

Although City Hall was built in the 70s, little has been mentioned about retrofitting the building rather than tearing it down.

“We’d achieve far better results in Long Beach, if major decisions were handled in a thoughtful inclusive and open manner,” said Otto, noting that the civic center project is being rushed through and poorly communicated. “They are not now.”

All candidates, except Garcia, who recently was endorsed by the mayor, seemed to question the wisdom of the proposed project.

“I most certainly agree that it’s definitely been poorly communicated,” Garcia said. “Multiple engineering centers said that we are in danger of collapse between the fourth and eighth floors, and what are we going to solve the structural problems.”

However, Shields questioned the ethics of the proposal.

“It looks like this is a mayor’s idea and some city council people are going along with it,” she said. “The question on my mind is why is he pushing, pushing, pushing? Who is getting paid off? Who is going to get the sweet deal?”

Schipske, who was the lone nay vote among her peers to vote for a request for proposals, also weighed in.

“I want to thank my warm-up acts over here because I’m the only council person who stood up and said, ‘No;’ that pesky little one ‘no’ vote,” Schipske said. “That building is 37 years old folks…. We are paying $1.5 million or so to get a consultant to do an RFP. The RFP went out today. The city council didn’t get to see it. We got to see it when it went online.”

Regardless of the outcome, the impact will fall under new a city council with a new mayor to have to deal with the impacts The debate also touched on education, campaign financing, transparency and pollution. While the question of who would be the best candidate for the job may never be answered, the reality is that on April 8, one of those candidates will be the new leader of the city.