Beyond Barr’s Muddling of th... 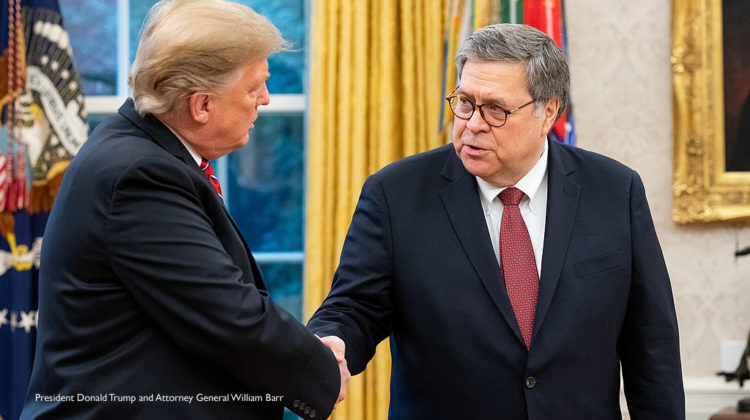 Beyond Barr’s Muddling of the Mueller Report

Donald Trump’s Attorney General William Barr did his best to muddle the redacted Mueller Report prior to its release on April 18, but he was met with a swift response that included Southern California congress members.

Acting more like Trump’s defense attorney than a servant to the nation, Barr obscured the fact that Mueller found substantial evidence that Trump was guilty of obstructing justice in at least four distinct ways, most notably by trying to fire Mueller or curtail his investigation. The report also “identified numerous links between individuals with ties to the Russian government and individuals associated with the Trump campaign,”…“the evidence was not sufficient to charge any campaign official.”

On Facebook, Schiff said, “Mueller’s report is not a vindication of Trump, but a condemnation.”

“I’m a former prosecutor and you can’t go through Volume 2 without coming to the conclusion that Donald Trump met all the elements of obstruction of justice,”  Rep. Lieu said. [The elements are: an obstructive act, a nexus between the act and an official proceeding, and corrupt intent.]

“The Special Counsel’s report describes Trump’s repeated efforts to fire Mueller, remove former Attorney General Jeff Sessions, and even tamper with witnesses by dangling pardons,” said Waters in a written statement, “At this point, Congress’ failure to impeach is complacency in the face of the erosion of our democracy and constitutional norms,”

Trump’s lawbreaking was so clear-cut that by late the next week, Fox News legal analyst Judge Andrew Napolitano weighed in as well, in a video that went viral:

When the president asked Corey Lewandowski, his former campaign manager, to get Mueller, that’s obstruction of justice.

When the president asks his then-White House counsel [Don McGahn] to get Mueller fired and then lie about it, that’s obstruction of justice.

When he asked Don McGahn to go back to the special counsel and change his testimony, that’s obstruction of justice.

When he dangled a pardon in front of Michael Cohen, in order to keep Cohen from testifying against him, that’s obstruction of justice.

It was no longer a question of whether Trump had repeatedly broken the law, and violated his oath to “ensure that the laws are faithfully executed.” It was a question of whether America’s political system had become fatally compromised or whether something could be done to save it from further — if not utter — destruction. This was further underscored when Barr reportedly refused to testify before the House Judiciary Committee — openly defying Congress’s constitutional oversight powers.

On April 24, the Washington Post published a Hillary Clinton op-ed in which she called on Congress to “hold substantive hearings that build on the Mueller report and fill in its gaps, not jump straight to an up-or-down vote on impeachment.”  And she pointed to the Watergate example of the House Judiciary investigation being led by John Doar, highly respected for his frontline role as a DOJ attorney in the early 1960s civil rights struggle. This seemed to capture the mood of most House Democrats. Indeed, Barr balked specifically at the idea of being questioned by a staff attorney, a practice specifically intended to reduce partisan drama and enhance effective fact-finding.

“The Special Counsel’s report is deeply concerning for many reasons. Most notably are the President’s efforts to obstruct justice,” Rep. Nannette Barragàn told Random Lengths.

“President Trump needs to be held accountable for abuses of power and unacceptable behavior outlined by the Special Counsel,” Rep. Alan Lowenthal said. “We can’t take impeachment off the table—but the process must be open and must be credible in the eyes of the American people. A narrow, partisan process, which would certainly be blocked by the Senate, could further harm our institutions and undermine confidence in the democratic process.”

“No one is above the law and Congress must be firm in sending that message,” Barragàn said. “I fully support my colleagues in the House Judiciary, Oversight and Intelligence Committees as they conduct investigations in the following weeks and seek to subpoena witnesses and obtain the full unredacted version of the Mueller report with all underlying evidence.”

“The next steps are clear,” Lowenthal added. “We need to hear from Special Counsel Mueller, and from key witnesses, including former White House Counsel Don McGahn. If the President ignores subpoenas, we must be prepared to use all the tools at our disposal, including the courts, to compel testimony.”

Trump’s strategy seems crystal clear: attempt to portray the normal process of congressional oversight and inquiry into executive wrongdoing as an extraordinary partisan attack. “We’re fighting all the subpoenas,” Trump said on April 24, a blanket declaration that would undermine his arguments in court, where “They don’t like me!” is not a valid legal argument.

There’s also the largely overlooked issue of Russia’s attack on elections, and the Trump campaign’s cooperation, as outlined by Steven Hall  in a Washington Post op-ed that same day, “‘No collusion’? I managed Russia operations at the CIA. Read between the lines.”

“Special Counsel Mueller did not find evidence to charge the President or members of his inner circle with a criminal conspiracy, but he found ample evidence of unethical conduct including willingness to accept Russian aid and support,” he said. “This should outrage every American, and all campaigns must pledge not to use any hacked or illegally obtained materials in the future.”

The concern isn’t just retrospective, either.

“The Russian threat isn’t going away, and President Trump continues to avoid taking strong steps to prevent it,” Lowenthal said. “The House Intelligence Committee is in a strong position to continue to monitor these threats, and to inform the American people with public hearings. These investigations will continue and can build on the Special Counsel’s findings.”

And far from being a distraction, it’s directly related to the Democrat’s legislative agenda.

“H.R.1, the House’s top legislative priority which I cosponsored and which passed earlier this year, included strong provisions to fund voter security systems, to crack down on dark money in politics and to develop a national strategy to protect our institutions from interference,” Lowenthal added. “I will continue to urge the Senate to pass H.R.1 as soon as possible.”

Trump’s strategy—backed up by the rest of the GOP—seems to be a direct attack on truth-seeking. In a story about Trump’s recording-breaking mendacity this week, the Washington Post noted, “All told, the president racked up 171 false or misleading claims in just three days, April 25-27. That’s more than he made in any single month in the first five months of his presidency.”

In line with that, an ABC/Washington Post poll found that 58 percent of Americans believe Trump lied to the public about matters investigated by Mueller. But only 37 percent favored starting impeachment, while 56 percent were opposed—figures some pundits have used to say Democrats should just drop their investigations. But polls show that support for impeaching Nixon was similarly low earlier in the process of public exposure, which is precisely why the firm, but measured approach laid out by Clinton and endorsed by Barragàn and Lowenthal makes sense.

The GOP response is another thing altogether. So far, it has repeatedly chosen party over country. There is no sign  of changing course—with the exception of a few heretics like Judge Napolitano.