A Green New Deal For The Golde... 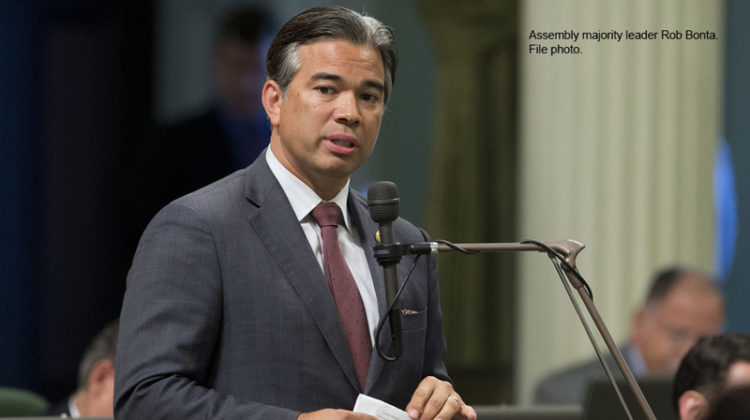 A Green New Deal For The Golden State

On Jan. 6, legislation to create a California Green New Deal was introduced in the State Assembly by Assistant Majority Leader Rob Bonta, along with 13 co-sponsors from across the state. Like the national version, introduced by Rep. Alexandria Ocasio-Cortez, a Democrat from the Bronx, it aims to address issues of racial and economic equity to ensure a just transition to a sustainable future, with shared economic prosperity.

“Just like with the original New Deal by FDR in 1932 that lifted America out of the Great Depression, we too must now harness all of our people power, political capital and courage to meet today’s greatest challenge — the clear and present danger of climate change,” said Bonta.

UC Merced climate scientist LeRoy Westerling said the state should not wait for federal leadership or appropriations. “Prosperity and economic and health security for all Californians depends on deepening our technological leadership in green, low-carbon technologies.”

The state’s public universities, colleges and community colleges are important partners. “Large scale public investment is required to implement green technologies throughout the state’s economy,” Westerling said. “A highly-trained workforce is necessary for the development and management of green technology systems to manage our vulnerabilities to climate risks.”

On the other hand, the costs of climate change — the costs of doing nothing — by 2050 “are on the order of hundreds of billions of dollars,” the bill’s statement of findings notes.

“Adaptation efforts and resources to prepare communities and minimize climate impacts, particularly to disadvantaged communities, are needed to ensure the resiliency of vulnerable populations in the state.”

Westerling expressed something similar, “It is important that the public and our political leaders understand the burden that has been shouldered by our economy from decades of underinvestment in public education and infrastructure,” Westerling said. “This creates an opportunity: the right investments can make our economy more just, fair and efficient while also reducing our impact on and vulnerability to climate change, enhancing prosperity and security for all Californians.”

The bill contains a broad statement of principles and goals, which are expected to be fleshed out in the legislative process, with discussions already under way. These include:

The bill also provides for the creation of a high-level council, appointed by the governor, to develop specific recommendations by January 2022. Members would include the director of the Office of Planning and Research, plus the secretaries of six cabinet-level agencies: Natural Resources, Environmental Protection, Transportation, Health and Human Services, Labor and Workforce Development and Business, Consumer Services and Housing.

California already has a rudimentary multi-faceted approach to climate change. This past March, a Time article was headlined,  California Already Has a Green New Deal. Here’s How It Works. But the central program cited — California’s cap-and-trade system of carbon emission credits — has serious problems due to oil and gas industry political influence and gaming, highlighted in a November report from ProPublica which found that industry emissions “actually rose 3.5 percent since cap and trade began.”

350.org supports the Green New Deal resolution introduced by AOC. “This includes phasing out the use of fossil fuels,” South Bay LA co-coordinator Sherry Lear said.  “California is a huge oil-producing state and there has been a huge resistance to make any real commitment, in the time frame needed, to phase out oil extraction, refining, etc. in our state. The bill talks about a just transition for fossil fuel industry workers but does not set a timeline to phase out fossil fuel. Clearly, it would have no chance of passing if it did.”

That may be the case right now, but public opinion is shifting rapidly and political activism — particularly youth-led — is sharply intensifying. The Yale Project on Climate Change Communication divides climate change attitudes into six categories, from “Alarmed” to “Dismissive.” From October 2014 to November 2019, the number of alarmed almost tripled from 11 to 31 percent — the largest group of all, while the number of dismissive shrank from 12 to 10 percent.

As for what’s possible now, “It is great to see so many legislators from a broad range of districts signed on in support of Mr. Bonta’s bill for a California Green New Deal,” said David Weiskopf, senior policy advisor for NextGen California. “This bill recognizes that now is the moment to redouble our commitment to a rapid and equitable transformation away from an economy built on extracting value from people and the environment to a regenerative approach that reinvests in long-term prosperity.”

This is just what Westerling is arguing for. “We don’t have to accept the status quo of countless hours wasted in gridlocked commutes to overpriced housing far from our workplaces that pollute our environment and harm our health,” Westerling said. “Improved and expanded transit systems and housing options can reduce our climate impact while greatly enhancing security and prosperity for all Californians.”

This bill marks a timely opportunity for Californians to come together to re-envision a positive future for all of us.

“We’re feeling really good about what Assembly member Bonta is trying to do,” Silk said. “Our conversations with him so far have made us feel real confident that he’s aware of the latest and best science and about how urgent action is.… But the devil is obviously in the details when it comes down to the policy.”

“I am not naïve as to the pressures on elected officials and I really do applaud Bonta for working so hard on this and most of the language included is very good,” Lear said.

But the existing time framework needs to shift dramatically.

“The goals that are set are way too far away,” she said. “Our planet is already in a climate catastrophe and we are already experiencing climate change impacts. We do not have until 2045 to reach carbon neutrality.”

The time is ripe for bold action, Westerling pointed out.

“Federal tax rates are now at historic lows compared to the last century,” he said. “It’s an opportunity for the state to increase its revenue base without a significant economic downside and take control of its own destiny, setting its own agenda for large scale public investments to address climate, environmental and economic justice goals while laying foundations for prosperity and security for generations to come.”