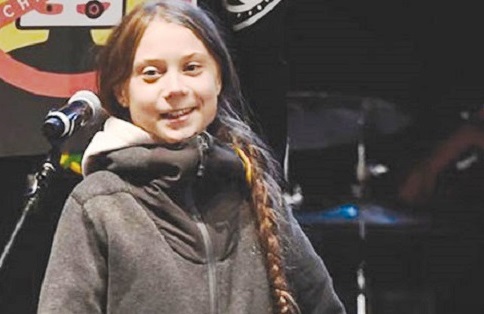 Swedish activist Greta Thunberg said young people are “bringing change” to the Madrid climate talks and will not be silenced. She joined a march of 500,000 in Madrid and a conference of 30,000.

At a news conference, Thunberg said that she hoped the negotiations would yield “something concrete.”

The 16-year-old was mobbed by press and spectators when she visited the conference center. Having arrived via overnight train from Lisbon to large crowds waiting for her in Madrid, Thunberg joined a large demonstration in favor of rapid climate action.

Speaking before the gathering she said that the voices of the young would not be drowned out. “People want everything to continue like now and they are afraid of change,” she told reporters.

“And change is what we young people are bringing and that is why they want to silence us and that is just a proof that we are having an impact, that our voices are being heard, that they try so desperately to silence us… We have been marching and striking for a year and basically nothing has happened.”

Responding to a question from a journalist who asked why do some adults view her as “angry,”  Thunberg said: “We are angry, we are frustrated and it’s because of good reasons.

“If they want us to stop being angry, maybe they should stop making us angry.”

Meanwhile, in a report released on Dec. 3 during the 2019 United Nations Climate Change Conference, the World Health Organization (WHO) called on countries to prioritize funding to deal with the effects of climate change on human health. In coming decades, global warming is expected to cause thousands of additional deaths each year from malnutrition, insect-borne disease and heat stress.

Even the Pope is concerned.

“We must seriously ask ourselves if there is the political will to allocate with honesty, responsibility and courage, more human, financial and technological resources to mitigate the negative effects of climate change,” Pope Francis said in a message to participants.

At the meeting, Marshall Islands President Hilda Heine noted that water covers much of their island at one or other point of the year as they fight rising tides. She noted that hundreds of people have evacuated their homes after large waves caused the ocean to inundate parts of the capital in Majuro last week.

She added: “It’s a fight to the death for anyone not prepared to flee. As a nation we refuse to flee. But we also refuse to die.”

The world’s average surface temperature is rising rapidly because human activities release greenhouse gases such as carbon dioxide (CO2). These gases trap heat in the atmosphere, like the glass roof of a greenhouse.

Despite clear scientific evidence of climate change and its impacts on all of Earth’s organisms, multiple international conferences have failed to produce results. In fact, CO2 emissions continued to increase last year.

Talk is cheap and country after country have pledged voluntary actions—but few have implemented programs to halt corporate pollution and expansion of fossil fuel use and there are few governmental directives. Instead many have promoted a false “carbon credits scheme” which allows corporations to buy credits from others while not reducing their own carbon footprint in the least.

In a book of Greta Thunberg’s speeches that was just published, she says, “We are fighting for everyone’s future. And if you think that we should be in school instead, then we suggest you take our place in the streets striking from your work. Or better yet, join us so it can speed up the process…we must start today. We have no more excuses.”