The Future of Marriage Equality: 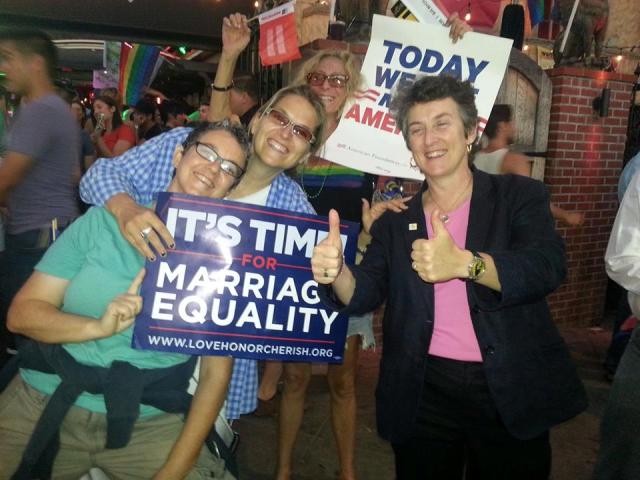 Now that the U.S. Supreme Court has upheld the right to marry for all adults of legal age, questions remain about potential struggles ahead for lesbian, gay, bisexual and transgender communities.

What are the ramifications, challenges, resistance and future for the equality civil rights movement?

To help answer these questions, Jenny Pizer, senior counsel and director of law and policy at Lambda Legal, took some time out of her busy schedule. Founded in 1973, Lambda Legal is the oldest and largest national legal organization whose mission is to achieve full civil rights of lesbians, gay men, bisexuals, transgender people and people living with HIV, through impact litigation, education and public policy work. Pizer has worked with Lambda Legal for 19 of its 42 years.

Pizer believes the long-term ramifications of the June 26 landmark ruling will mostly be positive, both socially and legally.

“We and our families will no longer be marked as different and less than other people. Instead, we will have the same opportunities as heterosexual couples to celebrate our love and commitment publicly, and to invite our friends and extended families to join those celebrations if we wish,” Pizer said. “Of course many couples will choose not to marry, or will choose not to do so in a gathering of relatives. But whenever a group is marked as different and lesser, many forms of discrimination and other abuse can follow. The Supreme Court’s lifting of that mark opens a new day for lesbian, gay and bisexual Americans.”

Pizer pointed out Justice Anthony Kennedy’s repudiation of the prejudice and discrimination of the past and his acknowledgment that gay people deserve equal protection under the law.

“This confirms what a majority of Americans now understand and it promises greater inclusion and respectful treatment in myriad contexts as a social matter,” Pizer said.

Of course, as a legal matter, this decision only resolves the question of marriage for same-sex couples. Yet, it could have a great many legal challenges to come.

Nevertheless, the ruling does not necessarily prevent other challenges to marriage equality. It does not prevent resistance to its mandate that same-sex-couples be treated with respect.

“But its holding and reasoning dictate an ‘equal treatment’ answer to the range of family law questions we see some anti-LGBT public figures defiantly raising,” Pizer said. “Yes, elected officials and candidates with extreme oppositional views are free to express those views. And candidates, anti-LGBT advocates and religious leaders are free to encourage public employees to obstruct and refuse to perform job duties related to same-sex couples marrying. But employees who heed those calls may well find themselves needing new employment. No one is entitled based on religious freedom or other basic rights to demand payment for work not performed. If anyone refuses to do their job according to the law and supervisors’ directions, they put themselves at risk of unemployment. They may also incur personal liability for choosing to discriminate contrary to a now-clear, direct constitutional command.”

Just days after the Supreme Court made its decision, county clerks and other government agencies defied it. The disobedience of these people invites lawsuits and personal liability for damages and attorneys’ fees, Pizer said.

“Our rights of worship and conscience have firm, important legal protection in every state and at the federal level,” Pizer said. “But those rights of religious belief and worship do not entitle any of us to harm others, or to demand a salary while not doing the job.”

She warns that the struggle for equal treatment continues. The LGBT community must work together to enact comprehensive non-discrimination laws at state and federal levels, resisting overly broad religious exemptions.

“We continue the work to educate the public about who we are and what we need to live full, free, safe, healthy and fulfilling lives. We especially heed the urgency of need of our transgender sisters, brothers and others, particularly those held in violent, abusive institutions that don’t respect individual gender identity and medical needs. We continue to advocate aggressively for the policy changes and resources needed by those most vulnerable in our community, including LGBT youth, seniors, the disproportionate numbers who are living in poverty, and those at risk because they are undocumented. And perhaps most of all, we redouble our commitment to working in the tightest possible collaborations with our sister movements focused on achieving racial justice, an end to ethnic profiling and bias, and reduction of our culture’s still-deeply-rooted sexism – the toxin that continues to impede progress toward full equality for women and LGBT people alike.”