ILWU Faces Off With Automation 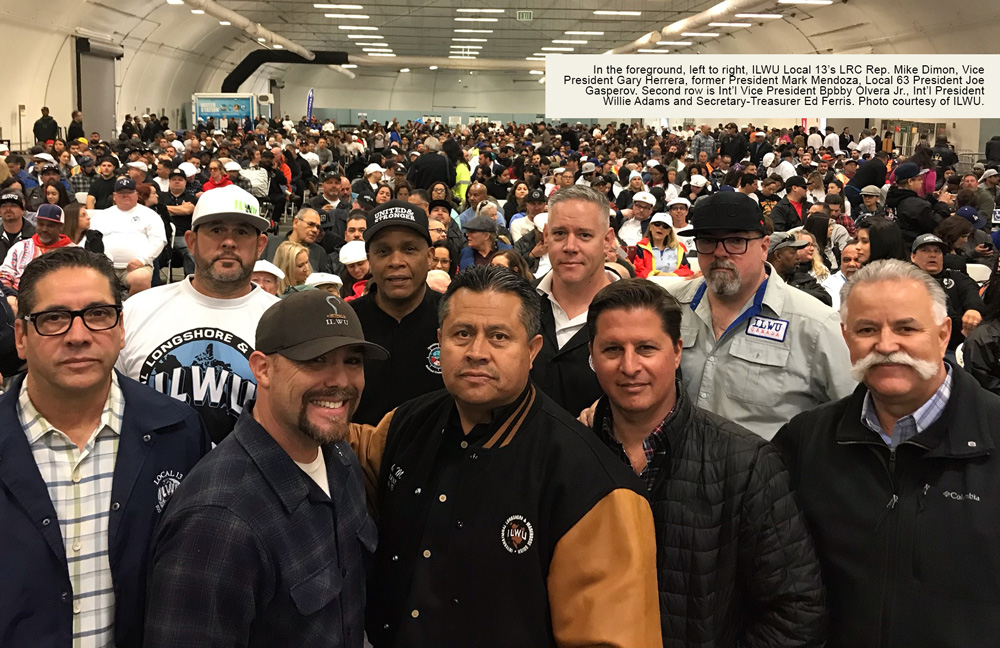 “The really large question before us goes far beyond APM.”

It’s not every day that 2,000 people show up at the Harbor Commission, but that’s what happened on March 21 at an almost four-hour public hearing on a Coastal Development Permit that would allow sweeping automation at APM-Maersk Pier 400 terminal.

The Level One permit had been approved by staff, but the decision was appealed by the ILWU local 13, which was responsible for a large majority of the turnout—though not in isolation. Union leaders from various unions and members, business owners and elected officials all spoke out in a chorus of shared concern and overwhelmingly against the automation.

“If the Port of Los Angeles approves this permit request, it will most ultimately ensure the economic demise of the Southern California region,” said ILWU Local 13 President Mark Mendoza in his opening remarks.

“The issue of automation is bigger than the ILWU/PMA contract,” said ILWU Local 13 Vice President Garrett Herrera, following Mendoza. “It’s about the community. It’s about the economy and ultimately the future of the middle class.”

“The whole small business community will be greatly impacted by the loss of jobs from automation,” Sandra Marchioli, owner of Godmothers Saloon, said during public comments.

“Any plan to automate terminal operations and cut jobs is a direct threat to our local economy and should be rejected by this Harbor Commission,” Los Angeles County Supervisor Janice Hahn stated flatly.

“The community suffers,” said John Bagakis, managing partner of Big Nick’s Pizza. “Less money spent in our stores and eateries equals less money for my business to use to sponsor a local Little League team, to buy a table at the adult forum benefiting young women in our community, less money to buy an ad for the Nutcracker at the Warner Grand…”

The point wasn’t lost on the commissioners.

“We tend to use in our talking points, about how many jobs the port creates, one of nine in the region,” Commissioner Anthony Pirozzi said.

The hearing began with Commission President Jamie Lee reading a letter from Mayor Eric Garcetti, requesting they “take full advantage” of the 28 day decision period allowed for under the Port Master Plan, “to consider the facts and arguments laid out today by Port staff, the union, the employer, and the public.” And it concluded with a unanimous vote to do just that.

But even that may not resolve anything.

“I would rather that we work together, to bring something forward so this doesn’t have to come to City Council, but I will exercise that option, if I feel  needed,” Councilman Joe Buscaino said, referring to the fact that City Council has the final say, as elected representatives.

Nor was it simply about the Pier 400 plan, as Garcetti himself acknowledged. He invited APM and the ILWU “to convene at City Hall for discussions which I would be pleased to facilitate,” but went on to say, “In parallel, these discussions should serve as the basis of a new task force to explore automation and its impacts on the future of the Port of Los Angeles and others across the state.”

Harbor Commissioner Diane Middleton — just two weeks on the job—spoke to the two-track situation. “There are two discussions that need to be had,” she noted.  First was specifically about APM’s coastal development permit.

“That’s one discussion. Now, there’s another discussion. And let me preface it by saying I really don’t like the word ‘automation.’  I would much prefer to talk about a ‘just transition,’” Middleton said — invoking a concept developed by labor leader Tony Mizzochi in the energy sector.

“When you talk about technology, there is a transition, you have to go from one point to another,” Middleton said. “But as one of the folks I’ve talked to in the last week said, learning about new technology doesn’t have to be on the backs of jobs, or our standard of living.”

Middleton went on to say there was a model for what’s needed right here in the port, what came out of the environmental struggle over the China Shipping terminal. “China Shipping moved forward, but in addition, the Clean Air Action Plan was developed,” Middleton said. “I believe we need to think in those broad reaching terms.”

“The port has already gone down this path before, fast-tracking permits for TraPac,” said Ray Familathe, former Vice President of ILWU International, “We see what’s happened with TraPac. It’s been a big debacle. If you didn’t learn anything by that, then this is just going to get worse. And all these people out here and the community at large, it’s going to get bigger, and it’s going to get louder.”

Mark Jursic of ILWU Local 13 called attention to Section 3.2.2 of the Port Master Plan. Under it, “The efficiency of the port is your job,” he said.

“There’s plenty of documentation out there that even the latest study issued by McKinney and company states production with automation drops realistically 7 to 15 percent. That’s not an efficient port.”

Furthermore, he noted, “Under the current plan, they will not be able to stack containers more than three high. [Section] 3.2.1 tells you you have to optimize this land use. How are you going to do that?”

Maersk attorney Peter Jabbour sought to avoid the whole discussion. “Simply put, there is no legal basis for this appeal to be granted,” Jabbour said. “To the contrary, the law and the facts are clear.  The executive director and his staff report is comprehensive, complete and correct and should be upheld.”

But several commissioners sharply disagreed, questioning the thoroughness, specificity and accuracy, as well as the larger issues involved. Renwick was baffled by the lack of information about employment levels.

“I find that somewhat implausible. Could you either answer that question, or can you explain why you didn’t provide an answer?” he said to James McKenna, CEO and President PMA.  McKenna begged off, claiming ignorance. “The PMA does not know the type of operation they’re running, what this equipment is capable of doing,” he replied.

“And you guys don’t have the operator’s phone number?” Renwick asked, incredulously. The questioning then turned to John Ochs of APM. “You say you don’t know,” about employment levels, Renwick said, “But no company in the world makes investments without first doing estimates.”

“The thing I’m struggling most with here is the outreach with the workforce,” Pirozzi said. “If the outreach were proper we wouldn’t be here today. We’d have a plan going forward. I’m struggling with why we waited so long. We’re talking about a huge change to social economics in the San Pedro Harbor Area.”

“I think the application is simply deficient on its face because it is vague and ambiguous,” Middleton said. The number of questions raised by commissioners pointed to a long and difficult period of deliberation before they vote April 16.

Beyond that, it’s anybody’s guess.  But in closing his remarks, Greg Mitre, representing ILWU pensioners, invoked the late Dave Arian, who served both as a harbor commissioner and as president of ILWU International.  “When he got into a beef, or something was coming down the pike,” Mitre recalled, “His favorite quote was ‘You want a fight? You got it!’”

APM-Maersk is a subsidiary of A.P. Moller–Maersk conglomerate. It has 324 offices in 115 countries worldwide and operates 590 container ships. Its headquarters are in Copenhagen, Denmark, with revenues of $40.3 billion annually.