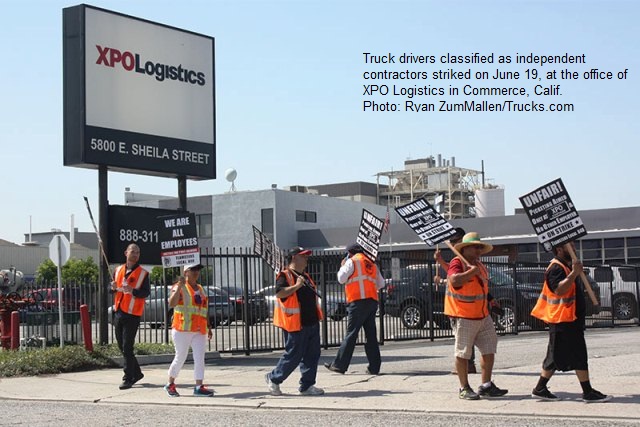 Protesting their treatment as “sharecroppers on wheels,” Port truck drivers in Southern California went on strike for the 15th time — this time, for the entire third week of June. The truckers were joined by warehouse workers and rail drivers who work for the same employers under similar systems. The workers say these systems deny them basic workers rights and have resulted in wage theft.

Specifically, the workers charge that their official classification as “independent owner-operators” is a fiction. They say they are forced to lease their trucks, obligated to make weekly payments and resultantly begin every pay period deep in debt.  They often earn less than the minimum wage – sometimes nothing at all.

Like the Fight for $15, the port truckers’ struggle has involved years of repeated brief-but-focused actions that have aimed for profound fundamental changes, truckers seek to build support among a purposefully disorganized workforce, educate the public about issues, and earn its support generating pressure for government action.

But this strike was a landmark in three respects:

First, it came on the heels of the first extensive national news coverage of the problem by USA Today, seven years after the problem of misclassification was documented in the landmark study, The Big Rig: Poverty, Pollution, and the Misclassication of Truck Drivers at America’s Ports. The national recognition of conditions truckers have been subject to for years both encouraged the struggle and gave added resonance to the message.

Second, the strike upped the pressure on local elected leaders.

“Striking drivers and warehouse workers for the first time took their pickets directly to both Long Beach and Los Angeles city halls to call on the cities’ leaders to step up and end lawbreaking at the ports they oversee,” Teamsters representative Barb Maynard told Random Lengths.

Third, strikers drew particular attention to the prospective push for zero-emissions vehicles — and to the need for including workers’ protections in the process — culminating in a public show of support from former Los Angeles Mayor Antonio Villaraigosa, whose initial version of the Clean Trucks Plan included such protections and ensured the truckers’ treatment as employees. But those full labor law protections were withdrawn from the original Clean Trucks Program as a result of litigation by the American Truckers Association. This left individual truckers shouldering the costs of new trucks — hundreds of millions of dollars annually.

Los Angeles Mayor Eric Garcetti and Long Beach Robert Garcia announced the new zero-emissions goals — set for 2035 — on June 10, the week before the strike began. The need to include workers’ protections in the process was featured in strike announcement later that week.

“The last time they did this in 2008 with the Clean Truck Program, the corporations ended up passing on the cost to the workers by requiring them to lease a truck in order to get hired and illegally misclassifying them as ‘independent contractors,’ leaving very little for the workers to take home to their families,” said Eric Tate, secretary-treasurer of Teamsters Local 848. “We don’t want that to happen again.”

Since then, courts have consistently ruled in favor of truckers, finding that they are employees as a matter of law. Seeing favor within the courts, striking truckers and their allies are determined to prevent the historical wage theft from continuing. More than $40 million in wage theft and penalties has been assessed in 376 cases brought before the California Department of Labor Standards Enforcement, but that’s only a fraction of the total costs the industry has shifted onto the backs of workers.

A 2014 follow-up to the Big Rig study, The Big Rig Overhaul, projected that “port trucking companies operating in California are annually liable for wage and hour violations of $787 to $998 million each year.”

As the strike neared its conclusion on June 22, former Mayor Antonio Villaraigosa appeared in support of the strikers, echoing their claims that port trucking is becoming a system of sharecropping on wheels.

“That’s what used to happen in the sharecropping system,” Villaraigosa said. “You owe more money before you start the day, and oftentimes at the end of the day, you still owe money.”

The strike was announced in advance on June 15 first in a press conference, then in comments to the Board of Los Angeles Harbor Commissioners.

“Drivers and warehouse workers are sick and tired of being worked like sharecroppers at the bottom of the multi-billion dollar logistics industry while greedy CEOs make out like bandits,” Tate said at the press conference. “There is just no excuse at all for LA and Long Beach to allow greedy corporations to continue to exploit these hard-working men and women through abusive and often illegal contracting-out, misclassification, temporary staffing and wage theft schemes.”

“I was living at a church, because I don’t earn enough to pay rent,” Alberto Arenas, a Cal Cartage warehouse worker for 20 years, told them.

The strike kicked off against XPO Logistics June 19, with picket lines going up first in Commerce, then Rancho Dominguez, San Diego and at the ports.

“We’re fed up with working so hard, making so little, and having no benefits,” said Jose Herrera, an XPO port/rail driver. “There’s nothing independent about us — XPO controls our work yet continues to fight us in court.”

On June 27, the strike expanded to four subsidiaries of California Cartage and to Chinese-government owned Intermodal Bridge Transport. That same day, strikers and their supporters marched from Promenade Square to City Hall in Long Beach, delivering letters to Garcia and city council members demanding an end to wage theft in Long Beach.

On June 28, faith leaders joined the picket line at the COSCO terminal in Long Beach. June 29 saw Villaraigosa join strikers at the Evergreen terminal in San Pedro. Finally, on June 30, striking workers and supporters rallied on the steps of Los Angeles City Hall and delivered demands to the mayor and city council, several of whom joined the workers at their rally. But the fight is far from being over.

“Misclassified drivers continue to file new claims for wage theft every day, and will not back down on their demand to end indentured servitude at the ports,” Maynard said. “Drivers will continue to escalate their demand that the cost of new trucks be the responsibility of the trucking companies who employ them, and of their retail clients, not the drivers as occurred in the 2008 Clean Truck Program.

“More strikes should be expected.”