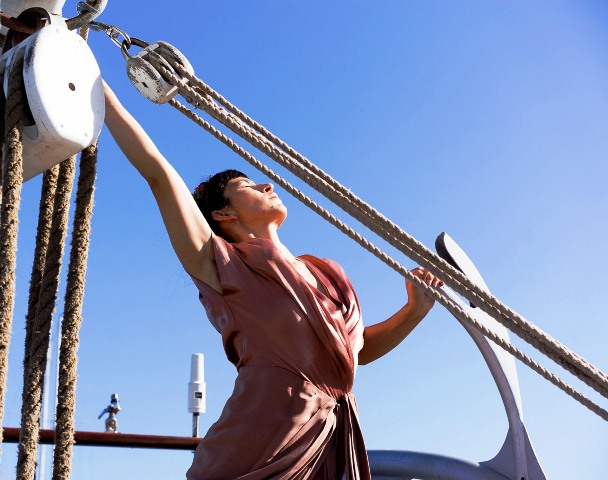 Heidi Duckler, a choreographer renowned for “site specific” performances — that is, a performance that is tied to a location — has taken her dance company around the world since 1985. The nomadic troupe has no permanent performance space. Instead, it brings the audience out of the dark setting of theater and into the radical environment of everyday spaces.

Nevertheless, the Tall Ships in San Pedro would not be considered an everyday place, unless you were part of a sailing crew in the 16th century. This is where the dance-opera story of sirens and sailors will resurrect a multi-sensory work that tackles themes of collaboration, sustainability and the influence of humanity on the environment.

The performance began as collaboration between AltaSea and the Duckler Dance Theatre.

Duckler will bring her company to San Pedro for the unique performance, which will celebrate the history and aesthetic of the Tall Ships juxtaposed with the contemporary volume of traffic in the port, contextualizing the performers by connecting past and present within the piece.

The performance gives a nod to the 100th birthday of Leonard Bernstein, the composer of the soundtrack for On The Waterfront, the Elia Kazan film.

“We have our own composer, who has based his music on the process of Leonard Bernstein, which is in the style of mise-en-scène — creating multiple scenes within a scene … very much how Elia Kazan also directed,” Duckler said.

She said this is also how she choreographs her performances. Her objective is to use every aspect of the reality that is present in the environment. The ships and sounds of horns and sea gulls are evocative of where the audience views the performance. This is how Duckler has staged previous performances in more than 200 diverse locations such as laundromats, parking lots and hospitals. In her TED Talk, Duckler stated that it is her goal to reveal the substance of our lives.