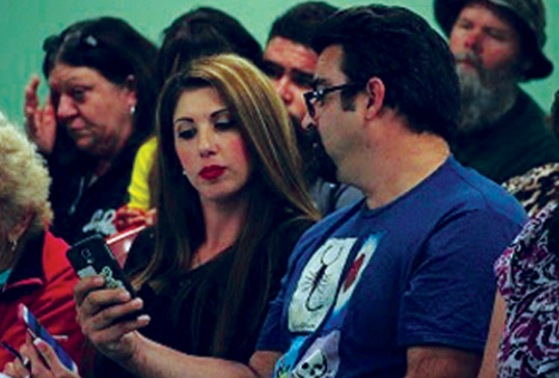 Utovac, whose life experience includes periods of homelessness, said Saving San Pedro is in violation of the Americans with Disabilities Act and the 14th amendment.

Among her chief concerns are photographs of local homeless people—some, she contends, may not be older than 18—taken by Saving San Pedro members and posted on social media.

“We don’t know if these people are minors,” Utovac said. “These photos could have a long term damaging effect.”

Amy Gebert, a spokeswoman for Councilman Buscaino, said that the councilman had not seen the letter and that his staff is awaiting advice from the city attorney before issuing a response.

Gebert runs social media for the District 15 office. She says Buscaino belongs to 94 Facebook groups, but emphasized that the councilman has little to no control over those groups, including the Saving San Pedro page.

“On the pages we control we maintain a very high community standard,” Gebert said. “The councilman can’t control the Internet.”

Buscaino’s office does moderate the Facebook page for Coastal San Pedro Neighborhood Watch, as well as a page for the district’s Spanish-language constituency.

Saving San Pedro was formed in late 2015 in response to growing homeless encampments in the Harbor Area. It has more than 4,000 members on Facebook, including Buscaino. However, the group’s attendance at the Central San Pedro Neighborhood Council meetings  rarely amounts to  more than a handful of people.

Buscaino has been public in his support of Saving San Pedro and has placed one of its leaders on his Homeless Task Force. This disturbs Utovac, who sees the organization as a hate group, promoting discrimination against the area’s homeless.

“Joe [Buscaino] is protecting people with established residences, that is the group he is interested in,” said Utovac about a potential violation of the 14th Amendment by the councilman.

Utovac also pointed to heated comments left on the Saving San Pedro page when news broke about the cease-and-desist letter; one of those comments seemed to provide a general description of her residence.

“We don’t hate anything,” said Palaziol. “She’s just trying to garner attention from something negative in our community.”

San Pedro’s homeless, like that of the rest of the city, has been on the rise for at least two years. According to the Los Angeles Homeless Services Authority the neighborhood is home to several encampments, most of which are near the U.S. Post Office on Beacon Street.

Saving San Pedro has made a habit of documenting the activity at these encampments, which they say are magnets for crime and drugs, yet no evidence nor solutions were offered to the area’s neighborhood councils. Palaziol sits on the Coastal Neighborhood Council even though his residence is within Northwest San Pedro boundaries.

Utovac claims that the group’s practice of taking and posting images of local homeless is likely to impede their ability to get a job in the future, especially in fields related to the law.

“Tough shit if you can’t go to law school,” he said. “If you get caught doing something in public, you have to deal with the consequences.”

Palaziol argues that one of the page’s primary functions is to report and shame people for public misbehavior and law breaking.

The city attorney has until April 18 to respond to Utovac’s cease-and-desist letter.

For his part, Palaziol, who is in the process of turning Saving San Pedro into a 501(c)3 nonprofit, seems unlikely to comply with Utovac’s demand.