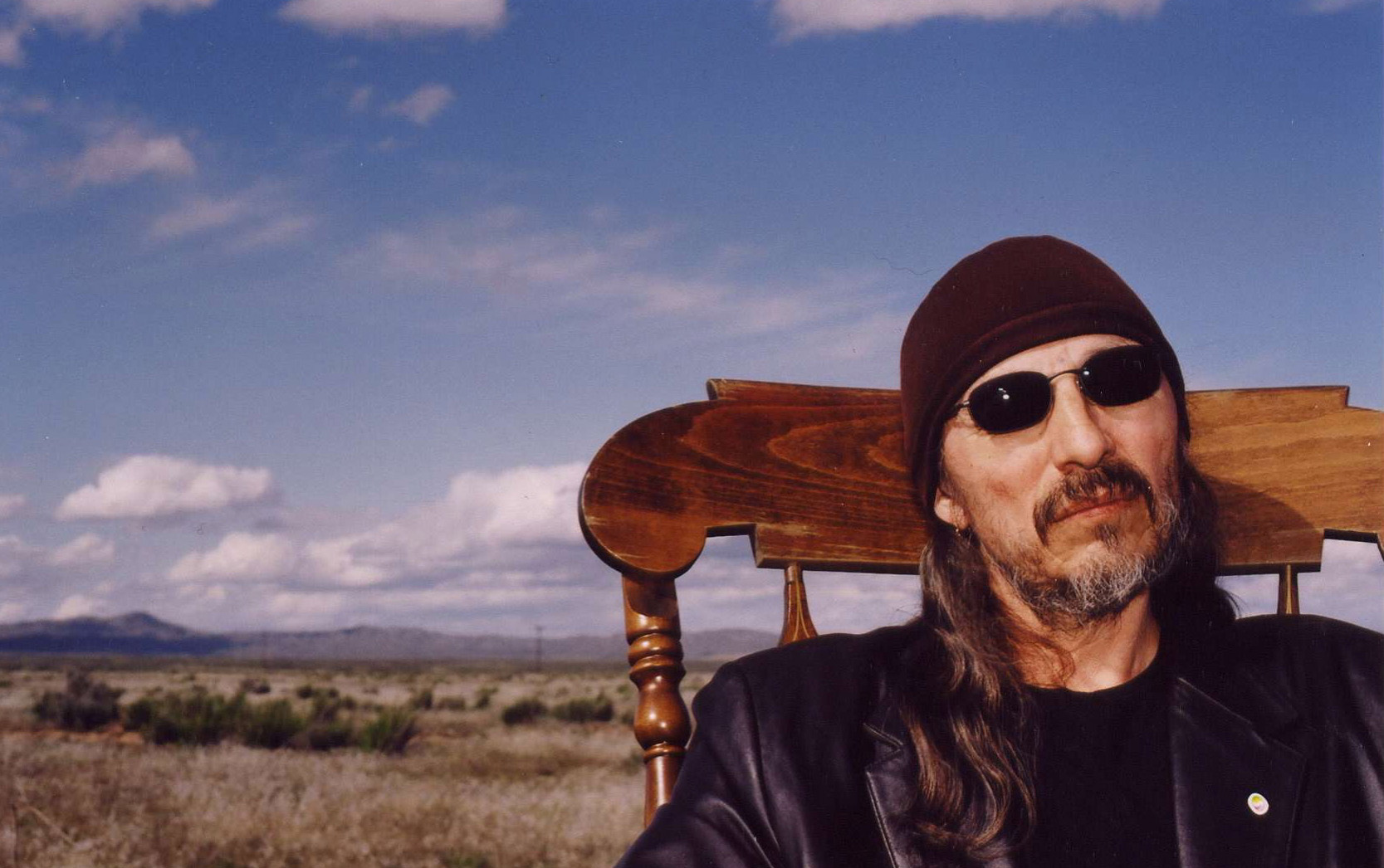 “We are a spirit, we are a natural part of the earth, and all of our ancestors, all of our relations who have gone to the spirit world — they are here with us. That’s power. They will help us. They will help us to see if we are willing to look. We are not separated from them because there’s no place to go — we stay here. This is our place: the earth. This is our mother: we will not go away from our mother.” – John Trudell

Activist and poet John Trudell died Dec. 8 at age 69 at his home in northern California after a long battle with cancer.

“John Trudell left Turtle Island to join the spirit world. The influential Native philosopher touched many throughout Indian country and beyond.”

His family said in a statement:

“His wishes are for people to celebrate life and love, pray and remember him in their own ways in their own communities.”

Many will remember Trudell as an eloquent and insightful poet who had a successful career as a spoken word artist and actor beginning in 1986. Others, will recall the Santee Dakota activist’s longtime dedication and activism for American Indian sovereignty, human rights and the environment. Trudell’s voice was so powerful that the FBI compiled a 17,000-page dossier on him that included a memo noting, “He is extremely eloquent, therefore extremely dangerous.”

John Trudell was born on Feb.15, 1946 in Omaha, and lived on the Santee Reservation in northern Nebraska as a youth. His mother was of Mexican Indian heritage and his father was Santee. Trudell quit high school in 1963 and, like many Native Americans at the time, joined the U.S. military; he served in the Navy during the early years of the Vietnam War, from 1963 until 1967. Trudell joined the group of Native Americans who had occupied Alcatraz Island in November of 1969 and used his training in radio broadcasting to become a spokesman for the newly formed Indians of All Tribes through reports on Radio Free Alcatraz. The occupiers asserted their rights to The Rock under terms of the 1868 Treaty of Fort Laramie signed between the Lakota and U.S. Government, which said that federal property abandoned by the U.S. would revert to the Indian Nations. In his speaking engagements over the years, Trudell often reminded listeners that treaties signed between sovereign nations under international were the supreme law of the land and the basis for claims and actions by Native American groups. These included the occupation of the Wounded Knee village in 1973 by the Oglala Sioux Civil Rights Organization and members of the American Indian Movement (AIM). Trudell served as a spokesman for AIM from 1973 until 1979.

In February 1979, he suffered an unimaginable loss when his wife Tina, children Ricarda Star, Sunshine Karma, Eli Changing Sun, unborn son Josiah Hawk, and Tina’s mother Leah Hicks-Manning, died in a fire at the Manning’s home in at the Duck Valley Reservation in Nevada. The fire occurred around the same time that Trudell burned an American flag at a demonstration at FBI headquarters in Washington, D.C. While Trudell and others suspected that the fire was deliberately set by enemies of Trudell and the Manning family (who were also activists) in government or local law enforcement, the cause of the fire was not determined.

“It left me even angrier than I was — and I was never too calm to begin with,” Trudell told the New York Times.

Trudell dealt with the tragedy, in part, through writing poetry.

“I didn’t even know what reality was… then these lines came into my head and something said don’t stop writing,” he said in the 2005 documentary, Trudell. “I started to write my lines—they’re called poems but in reality they are lines for me to hold onto, my hanging-on lines, it was real to me, it was a parting gift from Tina.”

In 1982, Trudell recorded some of his poems, with Native American traditional singer Quiltman backing him on drum and voice. They released the cassette album, Tribal Voice in 1983. Trudell connected with well-known activist musicians at the time when he was speaking at anti-nuclear rallies, including Jackson Browne, Bonnie Raitt and Kris Kristofferson. 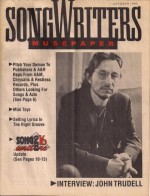 In 1986, Trudell met guitarist Jesse Ed Davis, a Native American (Kiowa) bluesman who had played in Taj Mahal’s blues band in the late 1960s, recorded with Browne, and played in the super group George Harrison put together for the 1973 Concert for Bangladesh. Legend has it that Davis heard Trudell speak at the drug and alcohol rehab center for American Indians, Eagle Lodge, in Long Beach, and said he wanted to set Trudell’s poetry to music. Davis produced the AKA Graffiti Man album, released as a cassette in 1986, featuring a mix of blues, rock, country rock and funk — and some of Davis’s most beautiful playing. Bob Dylan had the album played for his audiences before his concerts and called it the best album of the year.

The Graffiti Man Band played several shows in Long Beach in the late 1980s — at Bogart’s and even the legendary Hollywood on the Pike, as well as at Cal State University Long Beach. Those turned out to be among the last shows played by Davis, who died in 1988, losing his battle with heroin addiction. With the group, and solo, Trudell performed his spoken word at many benefits for Native American, environmental, and other causes, and continued to do so even as his spoken word and acting career took off. He appeared in the 1992 feature film Thunderheart and the Sherman Alexie-penned film, Smoke Signals in 1998. Trudell also worked with Thunderheart director Michael Apted on the documentary film about the case of Leonard Peltier, Incident at Oglala. Trudell did many speaking engagements, poetry readings and interviews to raise awareness of the Peltier case.

He re-released AKA Graffiti Man on CD in 1992, as well as many other collections of his spoken word backed by Davis, and later the group Bad Dog, featuring guitarist Mark Shark. Albums include But This Isn’t El Salavdor, Heart Jump Bouquet, Children of the Earth: Child’s Voice, Crazier Than Hell, and most recently, Wazi’s Dream.

Trudell was also an advocate for cannabis and hemp; he co-founded Hempstead Project Heart with Willie Nelson in 2012 to advocate for legalizing growing hemp for biofuels, food and clothing.

“He was John Lennon, the son of Crazy Horse, Dylan of the urban rez, the rez rez, the world rez,” wrote Native American poet Joy Harjo, in a tribute published on the Indian Country Today website.

John Trudell cited John Lennon as one of the songwriters who influenced his writing, and paid tribute to Lennon in the poem God Help and Breed You All (for John Lennon), included on the 1986 AKA Graffiti Man album. That Trudell “walked on” on the 35th anniversary of Lennon’s assassination brings to mind his words that connect several themes that run through Trudell’s poetry:

“In bed for peace
in love with a Japanese woman
hated by an international YMCA ex-Jesus freak
who blew him off the stage that Martin dreamed about
how the CIA didn’t say anything
hoping no one would imagine psychiatric head doctor connections
or Manchurian candidates
war maker’s behavior modification master plan
killing men of peace.”

Also at the core of Trudell’s work was the spirit of love; from Rich Man’s War:

thing is, it has to do with heart.
we have to understand what hearts are for
before we can get back to heaven or paradise
or the power in OUR MIND.

John Trudell will be missed by those of us who had the honor to know him, and the many, many people who were enlightened and touched by his words, his work, and his spirit. For information about Trudell’s albums and books, check www.johntrudell.com.