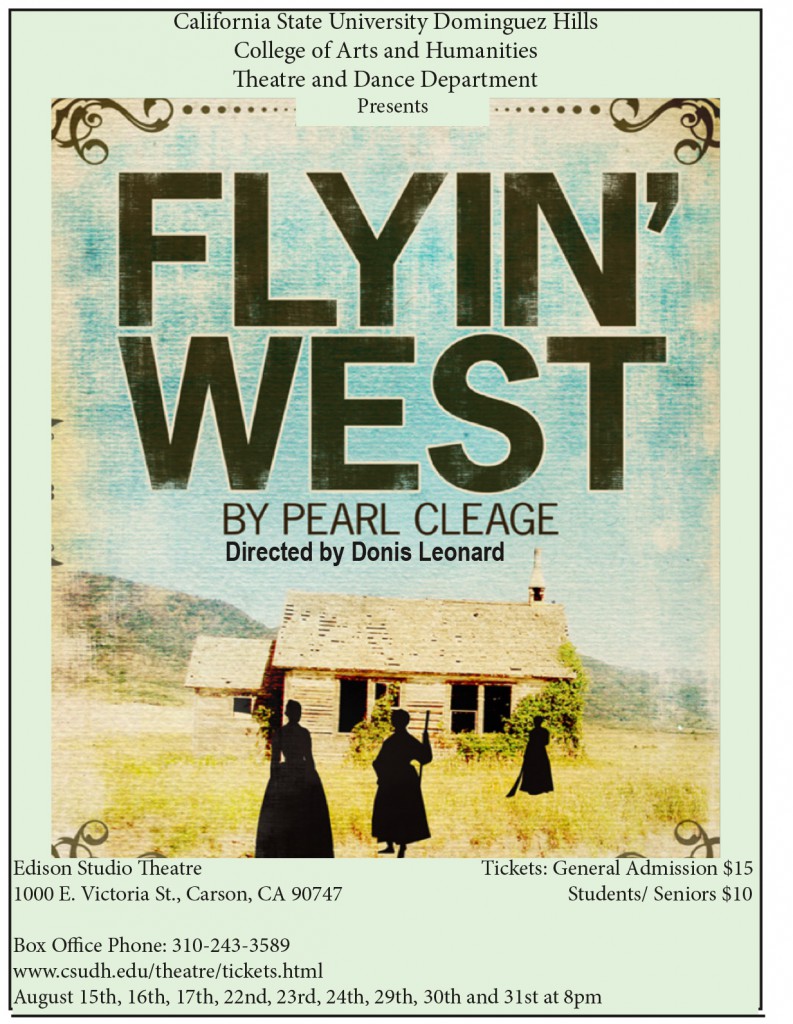 Aug. 15
Flyin’ West
Flyin’ West lands for three weekends in August in celebration of CSU Dominguez Hills’ Black Theatre Program’s 15th anniversary.
Set in 1898 in the era of reconstruction following the Civil War, “Flyin’ West” is the story of four African American female pioneers who settle in the all-black town of Nicodemus, Kan. Seeking the freedoms promised them, the women instead are challenged by a harsh and unforgiving terrain as well as a society not yet ready for equality among races or strong independent women.
Performances are scheduled for 8 p.m. Aug. 15, 16, 22, 23, 29 and 30, and at 2 p.m. Aug. 17, 24 and 31, at the Edison Theatre in CSUDH.
Details: (310) 243-3589; www4.csudh.edu/theatre-arts/2014-15-season
Venue: Edison Theatre
Location: 1000 E. Victoria St., Carson

Aug. 16
Fiddler on the Roof
The Long Beach Playhouse Mainstage Season Closes with Fiddler on the Roof, through Aug. 16.
Set in 1905 Czarist Russia, it tells the story of Tevye, a humble dairy farmer and his quest to find suitable mates for his five daughters. Despite his efforts, the daughters are feeling the influences of a world beyond the village.
Performances are 8 p.m. Fridays and Saturdays, and 2 p.m. Sundays.
Tickets are $24 for adults, $21 for seniors and $14 for students.
Details: (562) 494-1014; www.lbplayhouse.org
Venue: Long Beach Playhouse
Location: 5021 E. Anaheim St., Long Beach

Aug. 20
Trying
Tony Abatemarco and Paige Lindsey White star in a true story<strong>, Trying, Aug. 20 through Sept. 14, at the International City Theatre in Long Beach.
A poignant, poetic and powerful story, inspired by the real-life experiences of the playwright, about the friendship forged between 81-year-old Francis Biddle, U.S. Attorney General under President Roosevelt and Chief Judge at the Nuremburg trials; and a tenacious 25-year-old woman from the Canadian plains – one of a string of secretaries Biddle’s wife has hired to help him put his affairs in order at the end of his long and illustrious career. Tickets range from $32 to $52.
Details: (562) 436-4610; www.InternationalCityTheatre.com
Venue: Long Beach Performing Arts Center
Location: 300 E. Ocean Blvd., Long Beach

Aug. 23
Jean Paul Sartre’s No Exit
Jean-Paul Sartre’s existential masterpiece No Exit is playing, through Aug. 23, at the Long Beach Playhouse.
The play centers on three characters: two women and one man who are locked up together for eternity in one hideous room in hell. The windows don’t exist; there are no mirrors; the electric lights can never be turned off; and no exit. The irony of this hell is that its torture is not of the rack and fire, but the burning humiliation of each soul as it is stripped of its pretenses by the cruel curiosity of the damned.
Tickets are $24 for adults, $21 for seniors and $14 for students.
Details: (562) 494-1014; www.lbplayhouse.org
Venue: Long Beach Playhouse
Location: 5021 E. Anaheim St., Long Beach

Aug. 24
Performances for Man of La Mancha will take place at 8 p.m. Thursdays through Sundays with a matinee performance at 2 p.m. Sunday, through Aug. 24, at the San Pedro Theatre Club.
Miguel de Cervantes, aging and an utter failure as playwright, poet and tax collector, has been thrown into a dungeon in Seville to await trial by the Inquisition for an offense against the Church. There he is dragged before a kangaroo court of his fellow prisoners, who plan to confiscate his few possessions—including the uncompleted manuscript of a novel, Don Quixote.
Cervantes, seeking to save the manuscript, proposes his defense in the form of a play. The “court” agrees, and Cervantes and his manservant don make-up and costumes, transforming themselves into Don Quixote and Sancho Panza. They then play out the story with the prisoners taking the roles of other characters.
Quixote and Sancho take to the road in a quest to restore the age of chivalry, battle all evil, and right all wrongs. The famous battle with the windmill follows, with Quixote blaming his defeat on his enemy, the Great Enchanter.
In a roadside inn—which Quixote insists is really a castle—Aldonza, the inn’s serving girl and part-time prostitute, is being propositioned by a gang of muleteers. Quixote sees her as the dream-ideal whom he will serve forever and insists her name is Dulcinea. Aldonza is confused and angered by Quixote’s refusal to see her as she really is.
The padre and Dr. Carrasco arrive at the inn and are frustrated by Quixote’s lunatic logic. They are interrupted by the arrival of an itinerant barber, and Quixote confiscates his shaving basin, believing it is the “Golden Helmet” of Mambrino.
Later Aldonza encounters Quixote in the courtyard where he is holding vigil, in preparation for being knighted by the innkeeper. She questions him on his seemingly irrational ways , and Quixote answers her with a statement of his credo, The Impossible Dream. Aldonza catches the fever of Quixote’s idealism but, attempting to put it into practice, is cruelly beaten and ravaged by the muleteers.
Not knowing Aldonza’s plight, Quixote and Sancho leave the inn, encounter a band of Gypsies, and are robbed. They return to the inn, only to encounter the disillusioned Aldonza who sings her denunciation of Quixote’s dream in the dramatic Aldonza. The Knight of the Mirrors enters and defeats Quixote by forcing him to see himself as “naught but an aging fool.” The knight reveals himself as Dr. Carrasco, sent by Quixote’s family to bring him to his senses.
At home again, the old man who once called himself Don Quixote is dying. Aldonza, having followed, forces her way into the room and pleads with him to restore the vision of glory she held so briefly. Quixote, remembering, rises from his bed to reaffirm the stirring Man of La Mancha, but collapses, dying. Aldonza, having glimpsed the vision once more, refuses to acknowledge his death, saying, “My name is Dulcinea.”
Back in Cervantes’s dungeon the prisoners have been deeply affected by his story and restore to him his precious manuscript. Cervantes is summoned to his real trial by the Inquisition. The prisoners unite to sing him on his way with The Impossible Dream.
Tickets range from $30 to $55.
Details: (310) 773-4964; thesanpedrotheatreclub.com
Venue: The San Pedro Theatre Club
Location: 624 S. Pacific Ave., San Pedro