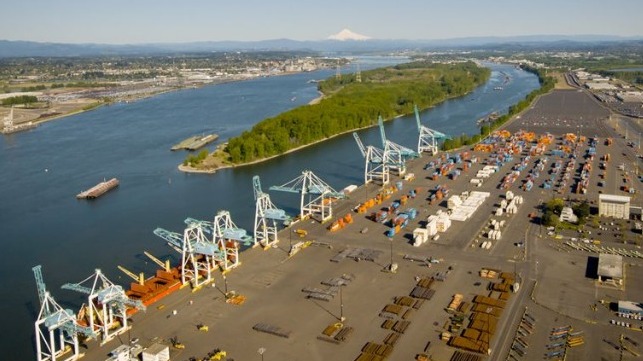 Few paid attention to terminal operator International Container Terminal Services Oregon until this past November, when an eight-member federal grand jury awarded the company $94 million—to be paid by the workers of the ILWU. The money is intended to punish the union for work slowdowns that began in 2012.

In Portland, a jury of eight ruled for management against the union. The decision was based on a finding the dock workers union sabotaged shipping traffic and caused productivity to plummet through years of labor slowdowns and stoppages. On Feb. 14 the trial judge will review the award and the union may still appeal the judgement.

A federal jury in Portland, Oregon granted a $93.6 million penalty in November against the union to the American subsidiary of the Philippines-based International Container Terminal Services, which formerly operated the Portland terminal. The back story is a complicated one about union jurisdiction.

In 2012, the local ILWU began a series of work slowdowns over two jobs that involved handling refrigerated containers (as well as electrical equipment related to those containers) that the union believed were wrongly being put outside of the ILWU’s collective bargaining agreement.

Instead, these two port jobs were represented by the International Brotherhood of Electrical Workers. ICTSI sued the ILWU, claiming the industrial action was an illegal secondary boycott and that years of battling the union had taken financial toil on the company. The jury sided with ICTSI.

“It’s an attack on the trade union movement and could have very negative repercussions for union workers and labor generally,” said Donald Marcus, president of the International Organization of Masters, Mates and Pilots.

The jury found the dock workers union guilty of sabotaging shipping traffic and have caused productivity to plummet through years of labor slowdowns and stoppages. The longshore union had long argued that the problems the union was accused of were actually due to mismanagement by the terminal operator and that terminal operator is using the court system to execute his plans to break labor unions on the docks.

According to their website, ICTSI is owned by a billionaire goods movement titan in the Philippines, Enrique Razon. With a global presence of 31 terminals in 19 countries, it has an annual income of $2.5 billion and employs over 7000.

Razon is the third richest man in the Philippines. His personal wealth is equivalent to half of Madagascar’s GDP, while workers at ICTSI’s Toamasina terminal earn as little as US$40 a month, struggling to feed their families and send their children to school.

Workers fundamental rights to freely associate, join unions and to collectively bargain have been suppressed in most of the countries that this company operates. ICTSI’s often illegal model of using outsourced workers for many of the most dangerous jobs at their ports is an attempt to limit their responsibility for working conditions and wages. Many of these violations breach domestic law in countries where ICTSI operates and violate international conventions.

“Africa is a very good place for us,” Razon said. “There is very little competition and they need the investment badly. Bottom line: Returns are best there with high yields in the freight handling business. To handle a box in our terminal in Yantai, [China], we charge about $45-$50. The same container in Africa easily goes for $200 – $250.”

The ICTSI business model can be best summarized by this statement by its president. “The countries with the best infrastructure in the world are dictatorships.”

“ICTSI’s operations—unlike those of other major terminal operators—are concentrated in countries where labor rights are not guaranteed,” said Professor Bradon Ellem, Professor of Employment Relations, University of Sydney Business School. “Yet the responsibilities for companies working in these environments are clear: the United Nations Guiding Principles clearly state that companies have a responsibility to mitigate against human rights risks —including potential labour rights violations – in the countries where they operate. With workers in almost all ICTSI terminals facing limitations on their access to labor rights at a country-level, it is clear that ICTSI must do more to ensure the rights of its workforce at an enterprise level.”

The ILWU had sought ICTSI to give it the jobs there held for years by workers who are members of an electrician’s local at the port. The company said it could not or would not assign the jobs as the port controlled them. The labor dispute was quickly decided in ICTSI’s favor by the National Labor Relations Board and later in federal court.

Ultimately, the company paid the port $20 million to end its lease and turned around and sued the union to recoup its losses.

At the next hearing on Feb. 14, the ILWU attorneys said they will try and persuade U.S. District Judge Michael Simon to reduce the award. If not, the union could potentially face bankruptcy.

However, union president Willie Adams, quoted in The Los Angeles Times, told members in a Dec. 5 memo that “a bankruptcy would not affect their contracts, working conditions, pensions and health benefits.” Whether that is actually true or an effort to bolster the members remains to be seen. A Chapter 11 bankruptcy filing could force the union to disclose its internal finances, reduce its operations contract enforcement and grievance handling or expose itself to further intervention into internal union affairs by U.S. government agencies and courts.

Addressing ILWU members on Dec. 12, 2019,  Adams wrote in the ILWU Dispatcher: “While we respect the process, we disagree with the excessive damages award, which supposedly compensated ICTSI for lost profits and some additional costs for a five-year period. It is our view that the award is not supported by the evidence, but based instead on speculation. The award is also several times what ICTSI projected it would make during that same five-year time period.”

“The ILWU attempted to settle the case, but ICTSI’s goal appeared to be “union-busting on a global scale,” Adams said.

The ILWU in Oregon and Washington has organized strikes and job actions multiple times within the past decade as employers sought to run operations without union labor. In one case, unionists blocked a grain train from entering the new export terminal at the port because EGT development refused to hire union members.

The unionists allowed the train to pass, reported the Longview Daily News, after police formed a line “donning riot helmets and brandishing rifles with rubber bullets.” ILWU members were clubbed and sprayed with pepper gas, the paper read. Sixteen people were arrested.

The ILWU’s favorite slogan of “an injury to one is an injury to all” must be the rallying cry for all of labor today.  Historically, workers’ power has been in their numbers and mobilizations, not in the courtroom. If the courts win this union-busting effort, more employers may attempt to use this same tactic and other unions will be targeted next.

(For further reading on the history of the labor movement and how workers have successfully fought back company and governments assaults, check out books and pamphlets at www.pathfinderpress.com)