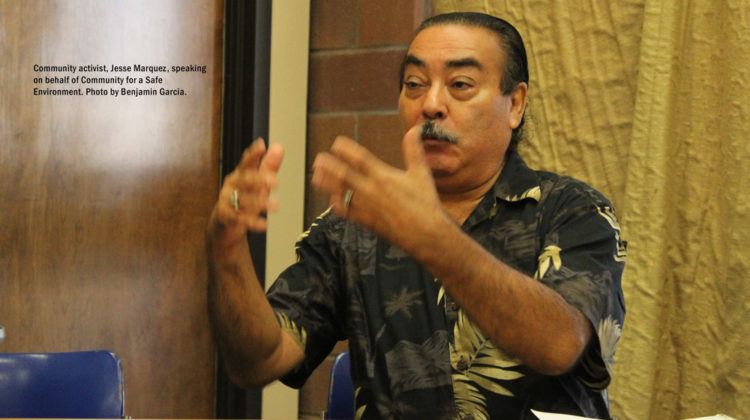 Wilmington Community Forum on Jobs and Safety at Refineries

Unionists, high school students, community residents and environmentalists attended a Sept. 8 public forum at the Wilmington Branch Library on how to become an effective grassroots advocate for Proposed Rule 1410. The proposed rule is a South Coast Air Quality Management District measure that would ban the use of modified hydrofluoric acid in refineries. The forum was intended to inform the community residents and stakeholders about the proposed rule, while rebutting industry claims that it would cost jobs.

These refineries have been at the center of controversy due to use of modified hydrofluoric acid, commonly known as MHF, an extremely toxic additive used in the refining of petroleum products with links to serious public health issues due to exposure. A Torrance refinery explosion in 2015, which could have killed and injured thousands in the South Bay, brought the issue to the fore.

“Fear and panic was widespread when the 2015 accident at the Torrance refinery happened,” said Julie Stoll, a teacher representing the Torrance Teachers Association. “It could have been much worse.”

Stoll blasted the refinery industry’s safety protocol, “shelter in place,” as a sham that is impossible to implement.

“Students are walking to school or home, at lunch or P.E. outside,” Stoll said. “We are given rolls of duct tape and told by the refineries we’ll have a 3-minute warning before the school is hit. We are expected to get all children inside, seal all doors and windows and AC/heater vents in the ceiling. It’s an impossible task. It is ludicrous.”

The executive director of the Wilmington-based Coalition for a Safe Environment, Jesse Marquez, recalled the 1969 Fletcher Oil Refinery explosion. The former Carson refinery was at 24501 S. Figueroa, the site where the Joint Water Pollution Control Plant sits today. More than 150 people died from the explosion. Marquez was 16 at the time.

“Two hundred people were burned and injured,” Marquez recalled. “This happened to my family, in our house…. Cars were crashing trying to escape, so we ran and then there was another explosion.  I heard a voice call out for help. It was a mother and a burned baby and the mother was yelling, ‘Save my baby!’

Marquez noted that when you have a disaster everything happens in minutes.

“There are no police or fire personnel to count on,” he said.

Torrance Refinery Action Alliance president, Dr. Sally Hayati, told the audience that this is not merely an environmental concern, but also a public safety hazard.

“MHF is a chemical that is never meant to be released,” Hayati said.

Hayati noted a 2012 incident in South Korea in which a minor refinery leak killed five workers and injured 18 others. In all, more than 12,000 people were treated, while thousands more were displaced from their homes for months in a rural area.

Hayati argued that if a similar gas leak were to occur in the South Bay, the damage could be far worse, given the region’s dense population. Hayati said the 1984 Bhopal disaster could be made for what could happen in the South Bay. In the Bhopal disaster, Union Carbide used a chemical that was similarly volatile as MHF. The Bhopal leak resulted in 25,000 dead and 500,000 more suffering permanent disabilities.

Hayati argued that MHF is so bad that the United Steelworkers, which organizes refinery workers nationwide (including Torrance,  PBF and Valero, Wilmington), emphasized in its 2013 report that “No industrial process risks more lives from a single accident. This is truly a risk too great.”

“The result of exposure is deep tissue destruction, possible death because the chemical passes through the skin,” Hayati explained. “The industry attempted to create a safer form with an additive, calling it MHF, but this failed. This was a [public relations] move to try to placate the population. Think of this as ultralight cigarettes and the tobacco industry’s attempts to deny responsibility for hundreds of thousands dying of lung cancer and emphysema.”

Hayati called for an outright ban on MHF, citing the Torrance refineries history of accidents and near misses as reason enough.

“With potential failures of safety measures, it is impossible to evacuate 615,000 from the South Bay,” Hayati explained.

The refineries claim they can’t afford the cost of replacing MHF, but if you look at the oil profits and new tax credits we know they can.

Hayati argued that contrary to industry assertions, jobs would in fact be created, not eliminated through bolstering safety measures and switching to a safer chemical used in most of the refineries. The refineries can build a new unit while still operating existing units with a minimum of 6-month downtime.

Magali Sanchez-Hall, the executive director of the Wilmington-based  Emerge, an environmental and safety group, spoke on the challenges of protecting community residents.

“We are not aware of what is happening in our backyards,” Sanchez-Hall said. “We have challenges to explain to the Spanish-speaking community the scientific language, which is often hard to understand….  The environmental impact reports by AQMD say nothing about protection and safety of the public.  While refineries have their own fire department and response teams the community does not.  How do we educate our community?  We need to organize to fight.”

The vice president of San Pedro/Wilmington chapter of the NAACP, Joe Gatlin, spoke on the impacts pollution has had on his 300-member family in San Pedro.

“Our community is the worst off with environmental issues, you might be making good money but the children are dying of cancer and getting asthma,” Gatlin said.

The South Coast Air Quality Management District Refinery Committee is hosting a community meeting to discuss Proposed Rule 1410 — Hydrogen Fluoride Storage and Use at Petroleum Refineries and other refinery-related topics on Sept. 22.