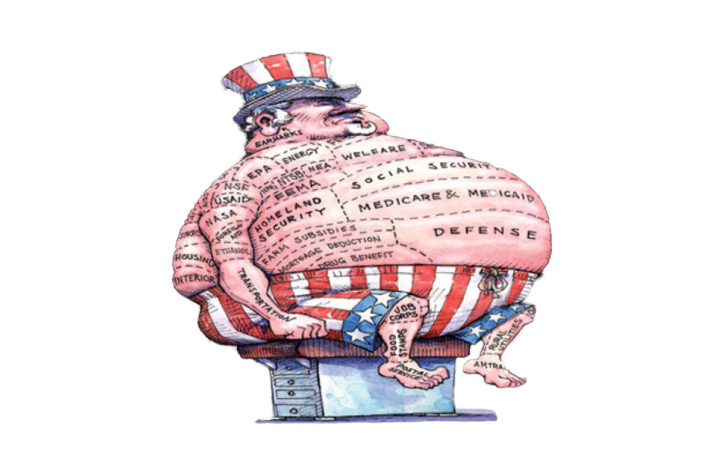 Speaker Nancy Pelosi was proud of how Democrats transformed the $2 trillion stimulus bill Republicans had proposed.

“[House and Senate Democrats] were able to flip this over from corporate trickled down Republican version to bubble up worker first families first legislation,” she said at her March 26 press conference. “We did jiu-jitsu on it.”

And from a relatively narrow perspective, there’s some truth in that.

There’s expanded unemployment insurance — covering more workers more generously and for a longer period of time. There’s a one-time $1,200 check for the majority of adults and $500 for children under age 17. There’s $350 billion in small business loans that may be forgiven if used to keep workers on payroll — in effect, the government is paying workers’ salaries to keep them on the job. And there’s also restrictions banning stock buybacks while receiving government assistance and for an added year for those receiving government loans.

“It’s no New Deal,” market analyst Marshall Auerbach wrote in the Naked Capitalism blog. “Rather it’s a massive economic slush fund that does its utmost to preserve the old ways of doing things under the guise of masquerading as a response to a public health emergency.”

“Democrats did manage to influence [the bill’s direction],” Politico’s Michael Grunwald wrote. “But Republicans won some huge concessions from Democrats … And Democrats didn’t get much that Trump didn’t actually want.” Significantly, they didn’t get automatic stabilizers — provisions that go into effect automatically the next time a serious downturn hit — which 74% of the public supports, according to a poll by Data For Progress.

In fact, a series of DFP polls showed substantial public support for more robust progressive policies, many of which Democrats didn’t even attempt to push. For example, 51% of voters support a monthly (not one-time) payment of $2,000—enough to really keep families afloat for the duration—while another 36% support $1,000.  Voters also favored a $2 trillion Green Stimulus plan — similar in scope to the Green New Deal — by a 20% margin.

“Pelosi’s right in the sense that they improved the provisions of the bill,” Auerbach told Random Lengths News.  “But there’s still a tremendous amount of pork in there… You got a tax break worth $170 billion, for example, for real estate moguls, along with a bunch of other corporate tax breaks that have nothing to do with relief for anybody.

“If we had another 2008-style crisis, then we would be in a situation where politically I think it would be impossible to just recycle money back to the oligarchs. I don’t think society would stand for it…. But now, now under the guise of a public health emergency, you got a new opportunity to funnel stuff from the public trust to the corporate pigs again. That’s what I think is going on.”

And there’s a great deal more that’s not being done to meet broader social needs.

$2 Trillion Stimulus is No New Deal

“If you look at the New Deal [during the Great Depression], you have 60% of the unemployed in public works and conservation projects, they planted about a billion trees, they saved the whooping crane, they modernized rural America — electrified a lot of it — they built the Cathedral of Learning in Pittsburgh, the Montana state capitol, much of the Chicago lakefront, New York’s Lincoln Tunnel and Triborough Bridge and the Tennessee Valley Authority,” Auerbach noted in contrast. “In total, they built 2,500 hospitals, 45,000 schools, 13,000 parks and playgrounds, 7,800 bridges, 700,000 miles of roads, a thousand airfields, they employed 50,000 teachers, they rebuilt the entire rural school system and hired 3,000 writers, musicians, sculptors and painters, including Willem de Kooning and Jackson Pollock.”

Nothing like that is possible during a pandemic (though planning for it certainly is). That’s when serious direct relief is needed. And, what the Democrats have provided pales compared to other countries, he noted.

“In Canada, for example, you’ve got direct aid which is about $1,400 compared to U.S. $1,200, and it is a one-time payment, whereas Canada’s direct pay goes on for four months,” he noted. “And, of course, you got a healthcare system that normally does cover everybody. There’s also ‘a 75% wage subsidy for small- and medium-size businesses retroactive to March 15.’ And, there’s a provision to cover gig workers as well. He ticked through several other countries — Britain, France, Spain, Denmark, Norway — each a bit different, but all of which were similarly robust in providing aid to workers that realistically reflects their looming needs. The Danish government is covering 75% to 90% of all workers’ salaries over the next three months.”

In contrast, the American response is potentially ominous.

“One of the horrifying consequences of this is that it continues to exacerbate the inequality problem as it devastates more and more of the middle and working class,” Auerbach said. “That’s my real fear…. And, if we don’t solve that, then you’ve got a country where millions of people have guns and that’s not a pleasant thing to contemplate.”

There are things to be done, with more legislation and more spending sure to come. Two things Auerbach sees as priorities are eliminating independent contractors, so that all workers get the same kinds of benefits and protections under law.

“I would be looking to reestablish domestic supply lines of vital goods, not just food but hospital mask ventilators, respirators,” he said, secondly.

This leads into a larger point.

“Hopefully we will start to rethink this whole notion that you can just offshore all of your manufacturing and leave it all in the hands of a country which may not have our best interests at heart,” he said. “I hope that people start to think in those terms. At the very least build some redundancy into supply networks so that we have adequate domestic provisions.

“We used to think that industrial policy wasn’t a dirty word…. We actually believed in that until the 1980s. There’s nothing wrong with reorienting the state, so that it has an active role again as it did in the 50s, 60s and 70s (a period when prosperity was much more broadly shared). The idea that the state should be a neutral umpire that just allows the free interplay of forces of the market, that’s just BS, because we’re not doing that here.”

Reviving a commitment to industrial policy dovetails perfectly with the idea of a Green Stimulus addressing pressing national needs, as explained by J. Mijin Cha, an Occidental College professor of urban and environmental policy and a senior fellow at Data for Progress.

“We see the convergence of three different crises — the coming economic crisis from the coronavirus, the record levels of inequality and the climate crisis,” Cha told Random Lengths News. “And these three are inter-linked as we’re seeing now in stark detail. The Green Stimulus is a way to address all of them and also invest in our future.”

It’s a bold idea, and deliberately so, she explained.

“Too often Democrats try to think about what is politically feasible and then build policies around that, instead of thinking about what is the right thing to do, and then building the political will to pass that,” Cha said. “So, our idea is to plant a flag, with the understanding that there will be compromise, but we don’t want to start from a position of compromise.”

Presented broadly as “a $2 trillion, 10 year investment in clean energy and jobs,” it enjoys a 20% margin of support: 49% support versus 29% oppose. But, as is generally the case, when it’s broken down into more specific parts, most are significantly more popular. In fact, Data For Progress noted:

It’s visionary in one sense, but hardly pie-in-the sky.

“The proposals we have are mostly things we’re already doing, but at a much bigger scale,” Cha said. “So we were not reinventing any new wheels, we’re just investing in projects we know are good — both good for the climate and create good jobs for people who need work and then will put an investment into our low carbon future.

“There’s going to be a stimulus…. It is up to us to make sure that the stimulus is one that helps working people and the climate and not bailout big companies.

The Green Stimulus proposal is grounded in four key strategies:

There’s also a commitment to a just transition for fossil fuel industry workers and communities. Cha called Trump’s designation of coal miners as “essential workers” a “false promise,” like so many others. Coal jobs have been declining for decades and the recent industry collapse is driven primarily by natural gas.

“The outlook of coal is already decided, we need to invest in those communities now,” Cha said. “We’re not going to be able to shut down coal mines, or oil and gas drilling, or fossil fuel power plants tomorrow,” she pointed out. “But we need to start thinking about it now, and investing in ways to diversify those economies and retrain and place those workers in different occupations and industries.”

The concern about workers extends to whole communities.

“What we’re really worried about is communities that are solely reliant on a power plant, or coal mine or some kind of fossil fuel infrastructure,” Cha said. “You can’t just shut down those plants and those mines and expect those communities will be fine. We have a history of unjust transitions in this country, so now is the moment that we need to start investing in those communities to help diversify their economies, to help think about what will happen to those workers when that time comes, so [who] will be able to transition in a way that is a just and equitable solution.”

The amount of money needed to do this properly—$2 trillion over 10 years—has just been spent by Congress in a matter of weeks to respond to the coronavirus, with another $4 trillion coming from the Federal Reserve. The idea that we can’t spend that much to respond to climate change as well — and take care of everyone in the process — may have been conventional wisdom as recently as February. But no one can believe it anymore.

Guidance on Closure of Sectors in Response to COVID-19

The tracker includes a map with the name, location and how much money each business received, and also groups recipients by industry.
Read more
Alerts

During the holiday weekend, beaches will be totally closed to all recreational activities. Beach parking lots will be closed, as well.
Read more