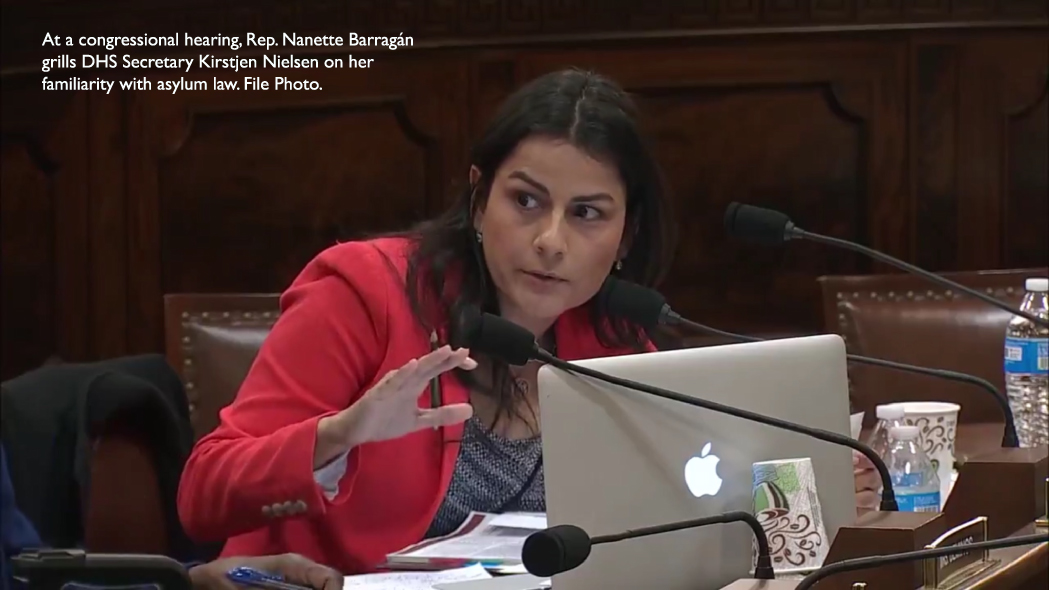 “Either you’re lying to this committee or you don’t know what’s happening at the border,” Rep. Nanette Barragán told Secretary of Homeland Security Kirstjen Nielsen on March 6 at the first oversight hearing held under Democratic control of the House of Representatives.

Barragán’s blunt assessment was well-deserved. Nielsen had earlier testified that asylum-seekers were not being turned away at the ports of entry—contrary to widespread media reports — and she had just doubled down on it again. When Barragán asked, “Was that your testimony?” Nielsen replied, “They’re not turned away.” It was an obvious falsehood, underscoring the Donald Trump administration’s signature contempt for honesty and accountability — even to Congress, where false testimony is a crime.

“I have been there, first-hand, and I have seen it, twice,” Barragán shot back.  “More recently, it just happened on Saturday when I happened to be crossing the border with my mother.  I heard a gentleman say, ‘I’m from Honduras, I want to apply for asylum.’  He was already at the turnstiles at the Ped West entry. And the agent said, ‘Sir, unless you have a visa, you need to leave. You need to go away.’”

This wasn’t Nielsen’s testimony, Barragán noted. “As a matter of fact, I pulled out my phone and started to record. And you know what? I was asked to stop recording. Why? Because they don’t want the American people knowing what is happening at that southern border.”

But that was only Barragán’s most recent experience.

“Do you know that two members of congress had to sleep overnight and spend 14 hours in the cold on the concrete at the Otay Mesa port of entry so a woman would be allowed to present herself because she was on U.S. soil and legally that’s what asylum allows? Did you know that?” Barragán asked Nielsen. The incident which involved Nielsen had been widely reported.

Nielsen tried to evade, but Barragán pressed her, “Yes or no? Did you know that two members of Congress had to do that?”

“I know that we have a process,” Nielsen said, evasive again.

“Are you familiar with the asylum laws, Madam Secretary?” Barragán asked.

“What we’re trying to do is process,” Neilsen obfuscated again.

Congressional oversight is supposed to ensure that government abides by the law, at a minimum. But oversight is clearly inadequate with regard to the Trump administration, which not only ignores the law, but also blatantly lies about it.

The absurdity was palpable, but utterly characteristic of the Trump administration.

“For far too long, millions of immigrants have been forced to live with the uncertainty and fear of being torn away from the country they call home,” Barragán said in a statement announcing the act. “Today’s groundbreaking legislation puts forth permanent protections and a pathway to citizenship for over two million DACA [Deferred Action for Childhood Arrivals], TPS [Temporary Protected Status] and DED [Deferred Enforced Departure] recipients.” The three programs provide protections for immigrants who may have no memories of countries to which they would otherwise be deported.

It was not a radical, untested departure from past experience, she noted. It was a way to build a more solid foundation for the future.

“As someone who represents more than 12,000 DACA-eligible youth and approximately 3,000 TPS holders, I know that when given a chance to fulfill the American Dream, our immigrant communities have excelled,” she explained. “For decades, immigrants have been an integral part of our society, our economy and our workforce by contributing in areas of education, public service and business. The Dream and Promise Act will finally provide relief for TPS holders and Dreamers and will forever change the course of our country.”

The Trump administration began rescinding these programs in 2017, but court injunctions have partially limited their impacts. The Dream and Promise Act would finally provide permanent protection.

“This bill is designed to promote justice and fairness for Dreamers, and for the TPS and DED holders who fled brutality, violence and natural disasters many years ago to come to this country,” Barragán said.

Given Trump’s hostility to immigrants, a veto seems inevitable if it should reach his desk, however, public support for immigrants has increased dramatically in response to his attacks. This is one of the signature struggles of our time.