A Stabbing in San Pedro 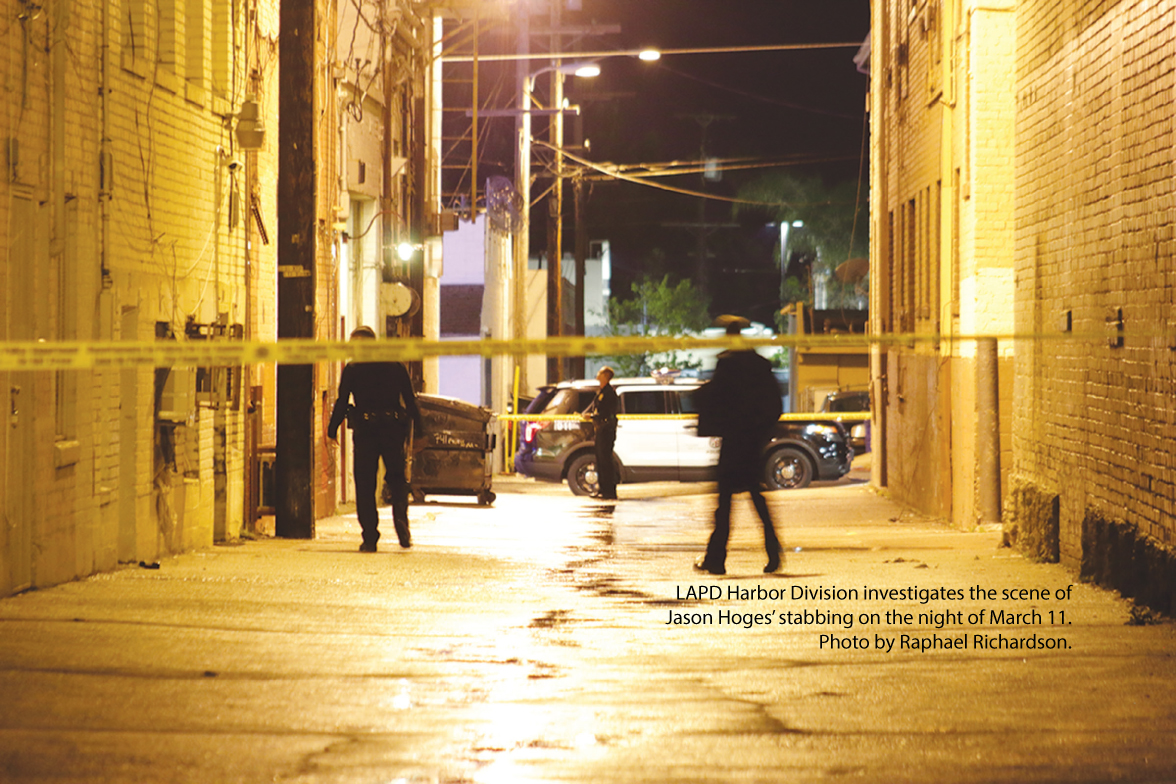 Perhaps you’ve seen it over the past week. Driving into San Pedro on the 110 Freeway, a banner fluttering on a fence facing the southbound lanes greeting all who drive into the city. One with a simple message emblazoned on it: “Rest in Peace Suave.”

“Suave,” in this case, was the nickname and handle to one Jason Elliot Hodges. Hodges was born, raised, and unfortunately saw his life ended in San Pedro last week when he was stabbed to death at the age of 41, in a series of events both tragic and all too common. He was a well-known figure in the San Pedro bar scene, on basketball courts at local parks, and among the tagging community as a friendly, outgoing figure albeit with a recently troubled personal history.

“I just . . . we lost a good friend,” said Arrin Burruss, a close childhood friend of Hodges when asked about his death by Random Lengths News. “Everyone knew him. He was a good guy. He was a basketball star in high school. The person who did this, I hope he spends the rest of his life behind bars.”

On March 11 shortly before 10 p.m., Hodges entered into a literal back-alley gambling parlor at 719 S. Pacific Ave. in the alley behind the Pacific Food and Beverage Museum and George’s Barbershop. Described as “an illegal internet café” by Detective Jeffrey Tiffin with the Los Angeles Harbor Division Police Department, the parlor operated a series of computers that ran unlicensed gaming activities for patrons.

According to eyewitnesses interviewed by police, a man named Joseph Jamall Center, also known as “Black Joe,” had been sitting and waiting in the parlor for several hours. Center had been there since the business opened around midday, neither drinking nor interacting with anyone, and was described by observers as behaving “weird” and keeping to himself.

When Hodges arrived, witnesses told police that Center approached him from behind, grabbing him with one arm round Hodges’ neck, and then stabbing Hodges repeatedly with a knife in his other hand before fleeing the premises.

Witnesses describe a panicked scene that followed, with some of the roughly half a dozen people in the parlor leaving the area, while others tried to attend to Hodges. A witness whose name is withheld at the request of Harbor Division Police Department due to potential testimony in any upcoming trial, told police that Center returned to retrieve the knife and had to be chased away.

In the panicked minutes that followed, two women attempted to get Hodge’s vehicle while the parlor’s proprietors lifted the 6’5”, 220-pound Hodges up the steps of the basement-based parlor into the alley. It took several minutes for the women to return with Hodge’s vehicle, place Hodges into the back seat, and then drive to Providence Little Company of Mary hospital. At this point, no one had called emergency services.

Unfortunately, Hodge’s vehicle stalled out on 6th Street behind Little Company of Mary’s. According to witness reports told to investigators, the women transporting Hodges to the hospital attempted to get the attention of the hospital employees but could neither bring the vehicle to the emergency entrance, nor would hospital employees leave the property without an official emergency call having been made due to policy.

By the time any medical help could reach Hodges in his vehicle, he had bled to death, and was pronounced dead at the scene.

Center fled not only the scene of the crime, but San Pedro and LA County entirely. According to Tiffin, he was tracked to San Diego, where he was arrested on suspicion of murder March 15 by a joint LAPD and FBI task force and brought to the Harbor Division police station to be interviewed.

Asked about what Center’s motive may have been, Tiffin told Random Lengths News that he couldn’t speak to what was learned during the interview due to its relevance in upcoming court proceedings, though he did indicate that it seemed “disproportionate” with whatever offense Hodges might have given Center.

“The only thing I will say is that it was due to an ongoing dispute,” said Tiffin. “We interviewed him. I can’t go into specific details about that, but even by then, by interviewing witnesses we had enough [to file charges]. Between the two there was no drugs or stuff involved, no prison beef, anything like that.”

On March 18, Center was charged for the murder of Jason Hodges and potentially faces a sentence of life in prison without the possibility for parole if convicted. Center’s next date in court is March 27 at Long Beach Superior Court.

Friends of Hodges interviewed by Random Lengths News had nothing but kind things to say and couldn’t contain their grief over Hodge’s death.

“He was dearly loved and will always be in our hearts,” said Yesenia Aguilar, the College Bound director at the Boys and Girls club, who said she grew up attending the club with Hodges. “He was like family. It hurts. You never understand why someone was murdered in the town they grew up in.”

Others interviewed indicated that Hodges had been suffering from drug and alcohol addiction issues, especially since his mother and last living direct relative, Judy, died this past year. Shortly after his mother’s death, Hodges was convicted of a felony for fleeing the scene of a crime, and spent much of 2018 at the Men’s Central Jail “Twin Towers” facility.

Despite something of a checkered past, nearly all those interviewed about Hodges spoke highly of him, saying he was a friendly and outgoing person and well liked amongst the community.

Hodges’ social media feed on Facebook is filled with generally upbeat, positive video messages addressed to “‘Dro City” residents about making it through the week and working hard to enjoy life as much as you can.

“This whole thing with Jason is all so shocking and horrible, horrible, horrible,” said Elke Freeman, who works for the Local 1309 Laborer’s Union, and grew up with Hodges. “I don’t know if this is going to trial, but I plan on being at every court date. It takes from your life as well. Because he was a part of your life.”

There is a memorial for Jason Hodges planned for March 30 at 11 a.m. at Bethany Christian Fellowship church on 792 W. 10th Street. Burruss, his family and Freeman are working with the church to arrange the service and ask that any donations made in Hodge’s name be directed to the church.

Speaking about both his friend and the rising crime rate in San Pedro, Burruss had the following to say:

“Photograph 51” Invites Us to Examine More than History & DNA

NY to LA, Marchers Demand US Hands off Venezuela

16th Annual LAHIFF’s DocSunday: Rebel With A Cause: The Life of Aiko Herzig Yoshinaga