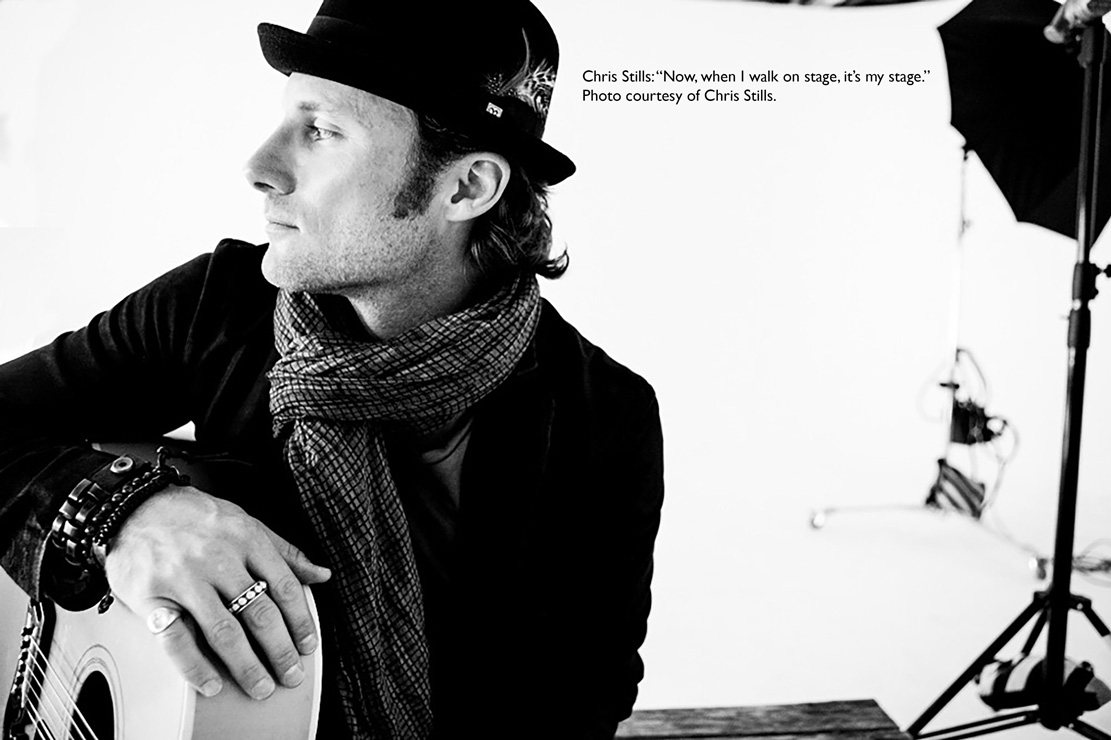 One would think the pressure is greater for those born to musical greats. But that’s not always the case, as I learned during a long and wide-ranging conversation with Chris Stills, a musician, actor and activist who is performing at the Grand Annex March 9.

The son of Stephen Stills (of Crosby, Stills & Nash fame) and French singer, songwriter, Véronique Sanson, Stills will be playing music from his latest album, Don’t Be Afraid.

The album delves into his experiences of living in France and America and his maturation through the trials of early adulthood, marriage, children and divorce.

Since their start more than 40 years ago at Woodstock, each member of Crosby, Stills and Nash have been inducted into the Rock and Roll Hall of Fame and the Songwriters Hall of Fame, recognized as both a group and individual artists. Their music and harmonies live on in the hearts of generations of fans.

Stills’ mother Véronique became one of the very first French female singer-songwriters to break into stardom with her debut album. She has an avid following in France.

With this lineage, Stills has nonetheless been able to carve out — without the potential pressure of his parents’ success — a solid niche in rock, roots and folk.

After his parents divorced, at 13 he moved with his mother to Paris where he attended the American School of Paris. Hearing his music, it’s clear he exudes the best of both his parents’ talents. But Stills is a troubadour of his own making. He sings and plays with an open heart, at one with his guitar. Through his trials, Stills has achieved the ability to connect to fans on this album and to audiences around the world.

Stills’ mother taught him to play piano and was a great influence on his playing. She also inspired his stage presence. Stills said he would watch his mom and aspire to be like her on stage because she’s a force of nature, as his father was too. Through both of his parents Stills got to see it all close up, backstage as opposed to just being in the audience.

“There’s a big difference [in the audience,]” Stills said. “You feel this energy amongst the fans and a connection. That fascinates me and it always been a big motivator in how I introduce myself and carry myself on stage. I’m always chasing after that. It’s like a dream.”

Stills’ mother was a motivator, pushing him to sing out. When he first wrote songs she would say, “I can’t HEAR you. No, no, no. Bring it. Nope, can’t hear you.” Out of frustration, he’d belt it out and it made him realize the power in his voice.

“I listened to my dad’s songs and watched and I emulated him,” he said. “We sound very much alike and we look alike. When I was young it was kind of crazy, almost spooky. And I loved that genre of music. So I felt this desire to keep the torch alive.”

Stills is humble, saying he’s never made anything that sounds different or a new genre. He hates being asked what kind of music he plays. He just makes music and good songs, adding he loves Elton John, Pink Floyd and Led Zeppelin.  He tried to change things up— more towards pop on his second, self-titled record from 2006, and said it didn’t really work. He misses his then-producer Ethan Johnson who helped shape him and produced his first record with the title track, 100 Year Thing, [1998]. Ethan “sucked the jam band out” of Stills making him into a professional.

Stills said 100 Year Thing is about doing the right thing. The song from his first record was about race relations and the civil war.

On Don’t Be Afraid, Stills said the title was originally a song about perseverance when you’re down and finding someone to (persevere) with or the idea of it. But then the song had a more profound meaning to him when he played on tour at the Olympia in Paris immediately after the Paris terrorist attack at the Bataclan in 2015.

While music plays a huge role in his life, Stills also enjoys acting. Stills’ acting career began in France after he performed the role of Julius Caesar in the top-grossing French musical Cleopatra — The Last Queen of Egypt. It was his first passion before he learned music. With great care and experience he said it’s something to really have fun with.  He auditioned for a play and got it, then for a movie and got that. Eventually he returned to America and auditioned for Showtime’s, Shameless and got that job, too. Stills called it a lowly little part. Nobody knew who he was in this town. There is an element that is way more intense in acting, Stills elaborated. In the studio “it’s your world and you are the boss” compared to acting, where you are very much the instrument of someone else’s creation.

“When they say ‘action,’ it’s basically code for ‘be great, right now,’” he said.

Stills’ hands are in multiple ventures, but closest to him is the Light Up The Blues Festival. Created in collaboration with his stepmother, Kristen Stills, producer of the film Autism the Musical and his father Stephen Still’s musical foundation, Stephen Still’s Children’s Music Project, the Light Up The Blues Festival raises money for Autism Speaks. Their first event in 2013 was at Club Nokia, with Crosby Stills and Nash, Lucinda Williams, Don Felder and Steve Earle. Around this time, Stills wanted to give back.

“It’s just something that one should do and I happened to be totally lucky that my stepmom had a job for me,” Stills said. “So, I became musical director and co producer.”

The campaign, called Light It Up Blue, honors people with autism worldwide. Iconic landmarks, hotels, sporting venues, concert halls, etc. will be lit in blue on April 2, in support of Autism Awareness.

“This is my passion,” Stills said. “The Grand Annex show will be one of the first West Coast dates and I’m stoked to go there. I love playing clubs and it’s right sized. I know how to play stadiums. There’s a way to do that too, but I love the intimacy of a good club with a great sound system.”

Sat., March 9 at The Grand Annex