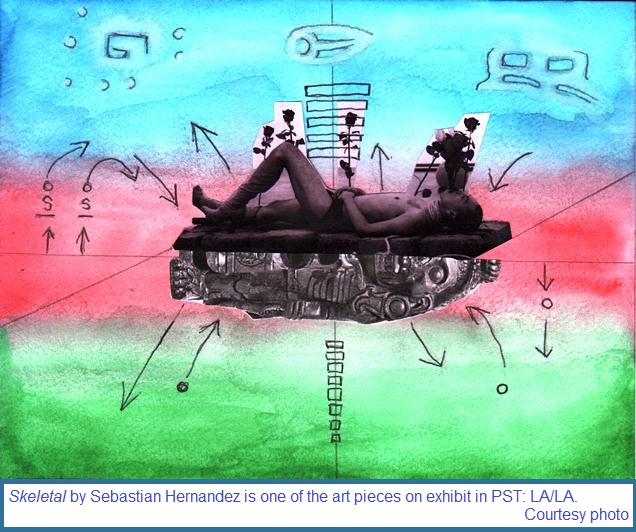 Pacific Standard Time: Los Angeles/Latin America is the second coming of the 2011 event that essentially changed the perception of Southern California art. By organizing a collaboration among all manner of arts and culture institution in the region, by activating it with millions of sponsorship dollars from Getty and Bank of America, Pacific Standard Time was able to show that Southern California’s eclectically and geographically far-flung expressions of art are parts that really do add up to a connected whole.

After opting out six years ago, Angels Gate Cultural Center is offering an expansive menu of exhibitions, performances and classes. Foremost among them is  Coastal/Border, an exhibit that could not be more relevant. The exhibit is inspired by the landscape and history of the area surrounding Angels Gate Cultural Center. Six Southern California-based artists will explore how the coast is fortified as a border, and how in turn that impacts the Latino/a communities of Los Angeles and beyond.The exhibition will be open to the public Sept. 16 and runs through Dec.17.

Much of the Coastal/Border exhibit takes place on and around Angels Gate, perched on the breathtaking bluffs overlooking Point Fermin and the Pacific Ocean. The location emphasizes connections from the port to Latin America, as well as other areas of the world.

“The border is not necessarily the wall,” explained curator Martabel Wasserman. “We are at this place where a lot of goods come in from all over the world … we are on this point that has been fortified as a coastal defense and has been made a border in all these ways. In addition, this tiny little part of Los Angeles has a really big impact on the world economy.”

“You can just look outside and see ocean and land, which is its own border,” remarked Amy Eriksen, director of Angels Gate.

Six other artists contribute to the broader event, which will run for two months. Included will be choreographer Mecca Vazie Andrews. Andrews will offer a movement-based social practice project called Fringes. She will also host a free movement workshop at 11:30 a.m. Oct. 29 and open studio drop-ins on Sept. 24, the opening weekend.

Video artist Paul Pescador has produced Greetings Friends, titled after an animated Disney film, Saludos Amigos. In 1940, the United States government created the Office of Inter-American Affairs out of concern for potential Nazi infiltration in Latin America. They hired Walt Disney to produce animated cartoons. Some of us may remember watching these on afternoon TV during the 50s. In these films the artist attempts to understand how Disney iconography is still being culturally appropriated. Pescador will present his film followed by a Q-and-A at 7 p.m. Oct. 7 in Angels Gate’s Main Gallery II.

Pacific Standard Time: Los Angeles/Latin America is huge, even for the most dedicated art enthusiasts. Seventy locations over hundreds of miles make it necessary to choose exhibits that feature artists and subjects that appeal to you. Fortunately, six separate South Bay and Long Beach art exhibitions will be connected via free shuttle bus service through the weekend of Sept. 23 and 24. The offering makes it easy for the public to arrange and enjoy an art-filled day at no cost. That’s the impetus behind the art weekend set up by the South Bay/Long Beach Hub, a collective of local arts institutions produced in partnership with Getty-led Pacific Standard Time: LA/LA.

Three separate shuttle loops will connect six cultural centers during the Sept. 23 art weekend.  Angels Gate Cultural Center connects two hubs Angels Gate Cultural Center in San Pedro and  the Museum of Latin American Art and to the University Art Museum in Long Beach. A second shuttle serves the Torrance Art Museum and ESMoA (formerly known as the El Segundo Museum of Art)  in El Segundo. The third shuttle can be taken from ESMoA to Otis College of Art and Design. Riders can change shuttles in order to visit more locations. All the museums have exhibitions dedicated to PST: LA/LA. For more information on the shuttle tour contact each museum individually, call (310) 878-4812, or email: aschnoor@andreaschnoor.com.

PST: LA/LA officially runs from September 2017 until January 2018. There is so much outstanding and important art to see, and most people will only see a fraction.

We Are Here, Here We Are