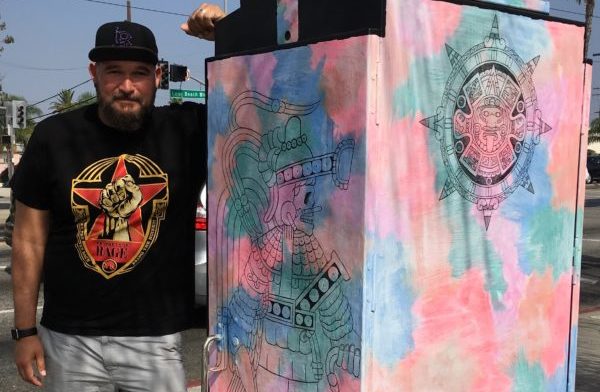 Almanza’s body of work examines social and political issues such as Chicano identity, the criminalization of immigrants, urban life both present and future, and visualizes how they are weaved into the fabric of mainstream 21st century American society.

The calculated objective of Almanza’s work is to revise what mainstream 21st century American society looks like with the inclusion of both immigrant and minority populations. Almanza’s work continues to establish both the existence and relevancy of classically trained narrative painters who identify as Chicano, Mexican, or Latino American to the national artistic dialogue. His work draws inspiration from traditional history and easel painting and artists such as Michelangelo Caravaggio, Jacques Louis David, Gustave Courbet, José Guadalupe Posada, David Alfaro Siqueros, Diego Rivera, John Valadez and Vincent Valdez.

Almanza earned a bachelor’s degree  in Art Practice from the University of California, Berkeley, a Secondary Teaching Credential from California State Dominguez Hills and an MFA in Figurative Painting from Laguna College of Art and Design. He keeps an artist’s studio in Long Beach and teaches fine art at H Arts Academy of Los Angeles, a College Preparatory High School specializing in the Visual and Performing Arts in the Los Angeles Unified School District.

The electrical box that Almanza painted is at 1990 Long Beach Blvd., in Long Beach.