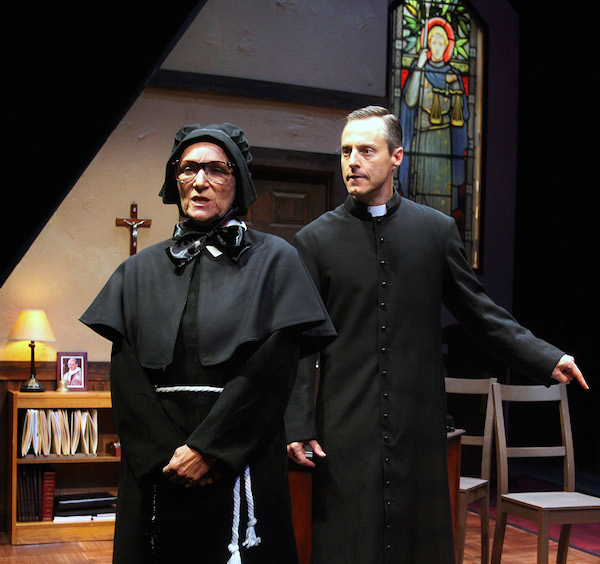 “Doubt,” Father Flynn tells us in the sermon that opens John Patrick Shanley’s Doubt: A Parable, “can be a bond as powerful and sustaining as certainty.” Those words echo throughout the play, as we find ourselves confronted with the question of whether Flynn is molesting one of his students, an investigation spurred by a nun guided almost entirely by suspicion.

It’s the early 1960s, and Sister Aloysius (Eileen T’Kaye), the principal at St. Nicholas Catholic Church and School, has a hunch. She’s had vague misgivings about Father Flynn (Michael Polak), so when the credulous Sister James (Erin Anne Williams) alerts her to the special attention the school’s only Black student is receiving from Flynn, Aloysius is certain the priest is molesting the boy. She has been here before: years earlier she had reason to believe a molestation was occurring. But in that parish there was a priest she could trust. “Here,” she laments, “there’s no man I can go to. And men run everything.” Nonetheless, she is resolved to take Flynn down, no matter the cost.

The good news: Shanley’s script is masterful. Topicality aside (it debuted in 2004, shortly after the Catholic Church was publicly exposed for its history of sexual abuse), Doubt is an affecting philosophical consideration of knowledge, responsibility, conscience, and human connection, with efficient examinations of race and gender politics thrown in for good measure. Not only does Shanley conduct touch on all of this without sacrificing plot flow, he manages also to insert quite a bit of wit into a deadly serious story.

Now for the bad: the monochromatic tone of International City Theatre drains the play of much of its feeling. It’s clear that something is amiss from the opening scene, where Polak delivers Flynn’s sermon—which is quite a good one on the page—with little apparent cognizance of the shifting modalities. Almost the entire play, in fact, sounds like a table reading by actors who have yet to dissect what they’re saying. Not only do conversations never sound conversational, more often than not the actors give and receive their lines as if their interlocutor isn’t even in the room. This seems like a conscious choice on the part of director caryn desai, with many scenes blocked so that the characters are completely out of touch with each other.

One consequence of the lack of flesh and blood in the delivery of the dialog is that the audience receives no help in getting the gist of things. That was painfully evident in the performance I saw, where the audience laughed in numerous places where there isn’t a trace of humor in Shanley’s script. To be sure, a percentage of clueless audience members is an occupational hazard of putting on a play with as much depth as Doubt; but when the actors don’t communicate the nuances, the blame is on both sides.

The show’s most successful scene is a conversation between Sister Aloysius and Mrs. Muller (Tamika Simpkins), the mother of the boy Aloysius believes Flynn is victimizing. Mrs. Muller is onstage only for this scene, and in all of theatre there may not be a role more impactful in so little stage time. Whilte ICT’s version suffers from the show’s general defects, because the conversation reaches such a climax of raw emotion—a task Simpkins handles relatively well—nowhere else in the play does the audience rightly connect with Shanley’s words. Simpkins received an ovation as she left the stage, even though the scene was only half over.

For those familiar with the 2008 film version of Doubt, a tour de force featuring Shanley both screenwriting (he manages to improve on the play) and directing four world-class actors (including Meryl Streep and Philip Seymour Hoffman) so they get this lines just as he intends, it seems International City Theatre’s version could not possibly measure up.  The experience may be more mixed for audience members who have never seen the film. Even so, this is a show that does not rise to the level of its source material.