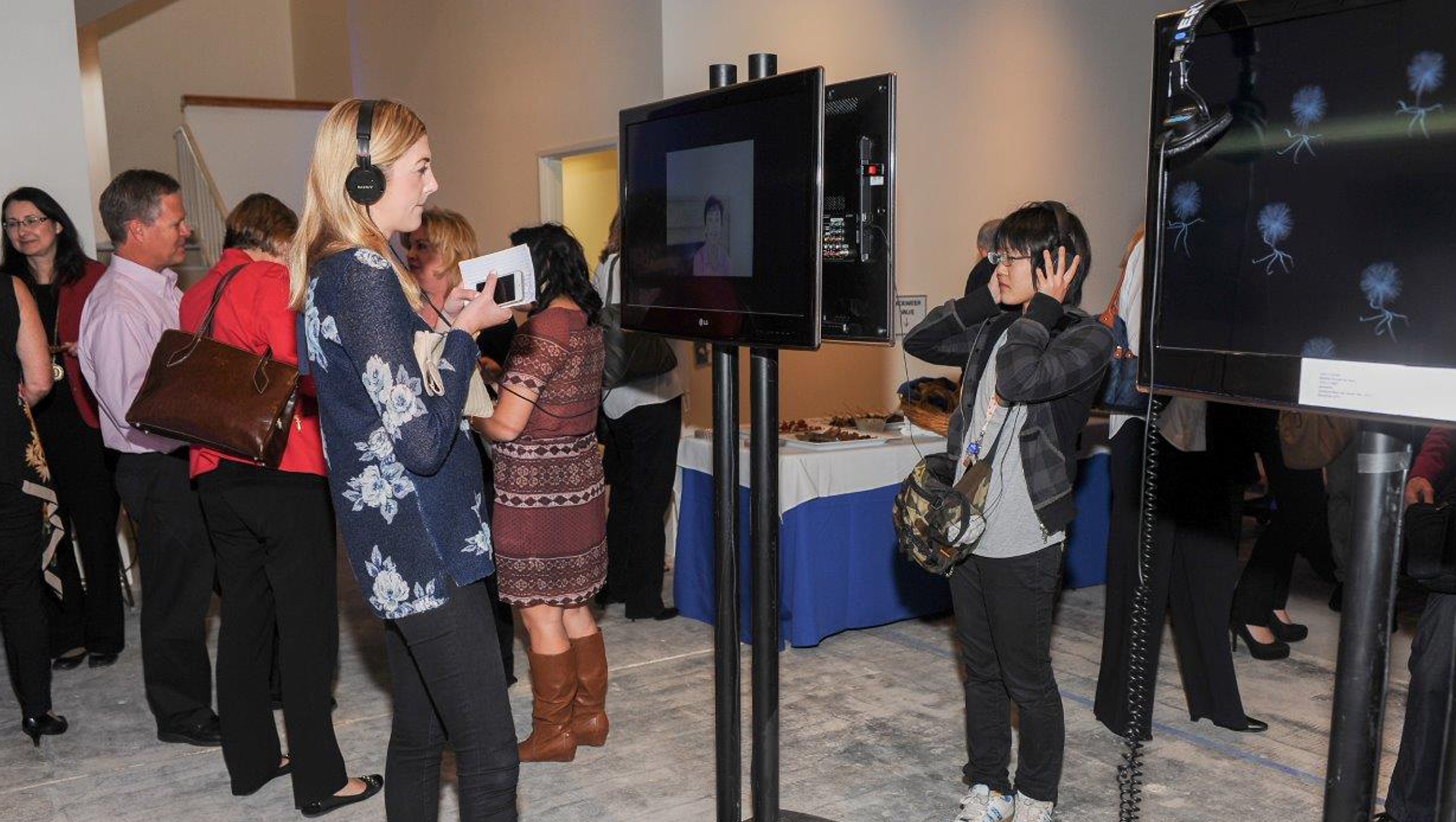 In 2008, a group of creative visionaries gathered informally and discovered that they shared a vision for the arts and economy in San Pedro. Recently, their vision came to fruition with the opening of the Marylyn and Chuck Klaus Center for the Arts in San Pedro.

The 4,000-square-foot, two-story center opened March 5, during the First Thursday Art Walk in downtown San Pedro with its façade flooded with neon blue light. The space will provide a permanent home for the Marymount College fine arts program.

The new center complements the existing Marymount 6th Street facilities, which include the waterfront campus on the first floor of the Park Place building at 222 W. Sixth St., and the Arcade Gallery in the Arcade Building up the street. Also part of the Marymount campus is a music program housed at San Pedro High School’s Olguin campus.
The combined facilities located in the historic district of San Pedro provide undergraduate and graduate students with instruction, internships and a cultural connection to the already existing creative corridor downtown. The hope is to enable students to connect with the deeply rooted arts community while interacting with galleries and artists during First Thursday Art Walk events.

The seven-year journey began with the vision of having an art college in the heart of San Pedro. Developer and property owner Gary Larson found early inspiration on a visit to Savannah, Ga.

“I had been very interested in the preservation and restoration of downtown San Pedro” Larson said.

Larson visited many local sites in his search of a city that had successfully integrated arts and education with economic revitalization. None of them seemed to fit the existing climate in San Pedro, until he came upon the model of the Savannah College of Art and Design. Savannah, an Atlantic fishing community, has much in common with San Pedro.

“The thing that immediately caught my attention was the private effort between the school and the local businesses,” Larson said. “They started with one building and grew from there. It is a decentralized campus that is integrated with the community.”

Larson met local arts educators and it became apparent that they had found a formula that was working for them. He saw potential for translating that vision to San Pedro.

At the time, Marymount was still a two-year school. But they were already in the process of upgrading to a four-year college.

“The university in 2008 was busy becoming a four-year school” said Michael Brophy, Marymount California University president. “By 2010, the college had grown so quickly it was clear that [it] needed to establish itself on 6th Street, particularly for the graduate programs.”

“The really exciting thing about having Marymount on 6th Street is that it is much like having Alta Sea (the marine research center) on the waterfront,” said Johnson, who is also a university board trustee. “Gary Larson and I used to say that San Pedro feels like a college town… too bad we don’t have a college.”

Brophy and Marymount University have arguably transformed downtown San Pedro into a college town. On any given day there are about 600 students in the four-block downtown area. The hopes are for the creative and economic impact to be felt in the near future.

Last week Otis College for the Arts released its 2015 Report on the Creative Economy. It states that the creative industry is responsible for one in seven jobs in the Los Angeles area. Many examples of economic revitalization can be found in formerly distressed local regions. The Santa Ana Art Walk is a glimpse of what is possible in San Pedro. The placement of the Orange County Center for Contemporary Art is an impressive addition to that arts district.

But in the midst of the excitement, there is controversy. Cultural arts philanthropists Chuck and Marylyn Klaus generously provided the funds that made it possible to acquire the property. Initial plans include classrooms and offices for professors, with donors’ names on the building. But at the opening ceremonies, Chuck Klaus released a strongly worded statement of concern, that these contractual obligations have not been met. His statement makes it clear that he expects a timeline for the fulfillment of these promises.

“I have known Marylyn for years,” developer Alan Johnson said. “She has been behind the scenes doing a lot of heavy lifting for our town. Downtown San Pedro owes a debt to her.”
Hopes are that this controversy will be resolved soon.

In the meantime, expect to see the Marymount shuttle running through the streets of San Pedro. The shuttle clocks 1,800 miles a month moving 600 students around downtown, and they will be here for a long time, helping to transform the San Pedro arts district.