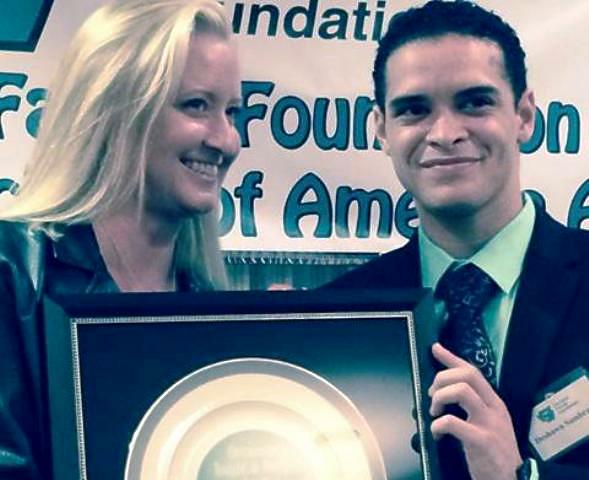 Isabela Mejia decided to take her mother’s advice and follow her sister’s footsteps when it was time to take advanced placement classes at San Pedro High School: Take Ms. Bruhnke’s AP Psychology class so she can do well in school.

“I enjoyed the way she taught,” said Isabel Mejia,16. “She bases it on how a real college class functions…. She is one of the teachers who really cares about her students and wants to make a difference in their [lives].”

“What keeps me going is the relationships with the kids,” Bruhnke said. “They trust you and they talk to you about things. They give back as much as I give in. It’s a mutual admiration society.”

Brunhke’s efforts were recently recognized by the Carlston Family Foundation with the 2014 Outstanding Teachers of America Award. She is one of only five teachers who earned such honors this year and the only one in the Los Angeles Unified School District.

The foundation received more than 75 nominations statewide this year, selecting 10 finalists. A minimum of five former students, the school principal and at least two colleagues were asked to explain about the teacher’s use of best practices and educational philosophy.

Apparently, one of her former students got the idea and put it on their Facebook accounts and it got around amongst bunch of her other former students, who, in turn, wrote letters and applied online. The foundation interviewed the nominators and later interviewed and observed Bruhnke’s classroom.

Deshawn Sambrano is one of Bruhnke’s former students who nominated her for the award. For him the road to college wasn’t easy.  His family constantly moved; he was affected by the drug use of family members and domestic violence in his home. Sambrano was encouraged to get an education, but he lacked the role models to help guide him. Moreover, his fear of failing often kept him from reaching his full potential.

“I had this fear that if I tried and I didn’t get straight ‘A’s I would fail and that would mean I wasn’t as smart as I thought I was,” said Sambrano, about his sophomore year in high school. “Entering San Pedro High School … I had no clue about what to expect. The school was large. I was frightened and it looked as though it would be another year of wasted time.”

That is, until the first day he entered Mrs. Karin Bruhnke’s classroom.

“The way she looked at me was as if she knew I was lost,” he remembered in a phone interview with a representative from the Carlston Family Foundation. “Her classroom was warm, welcoming and had a homey vibe.”

“Entering her Honors World History class became the most important part of my day,” said Sambrano to the interviewer. “She got me to come to school, encouraged my involvement in the classroom discussion and was truly interested in what I had to say.”

Principal Jeanette Stevens said that it is that type of rapport Bruhnke shares with her students that have helped them become successful.

“When students aren’t successful she gets to the heart of what the students needs are and figures out a way to support them,” Stevens said.

This year, she was selected to be a mentor teacher, a teacher assigned and paid to coach and nurture new teachers.

Bruhnke offers lectures and discussion in her classroom, but she also tries to use more interactive methods where students partner up and do assignments together. There is a lot of pre-reading and graphic organizers such as Venn diagrams to narrow big ideas.

However, that doesn’t mean she doesn’t have very high standards for her students.

“I’m not going to settle for them doing just low-level efforts in my class,” she said. “I get tired of people treating kids in this community like they must be not capable of college…. I don’t have that in my classroom. There is going to be high expectations. You are going to work hard.”

Giving them a bunch of worksheets is not enough. The students must read and be able to express themselves on paper, she said. She tries to use real-world examples, tell a lot of stories and personal examples to try to engage and relate them to the material.

“This class is about its content, but it’s also about the skills that you are going to need to be successful when you go off to college,” she said.

Bruhnke takes pride in preparing for her classes.

“For me, if I’m going to commit to a class like AP and I’m going to require my students to do all that work, because it’s going to be a lot of work on them, I better have done it too,” she said.

As for Sambrano, these days, he is working on a double major in psychology and philosophy at Cal State Fullerton with a 4.0 GPA in both majors.

“Mrs. Bruhnke changed the direction of my life,” he told the Carlston Family Foundation interviewer. “She inspired me to study harder and make learning important…. There is no way possible I could ever repay her for how she changed my life.”