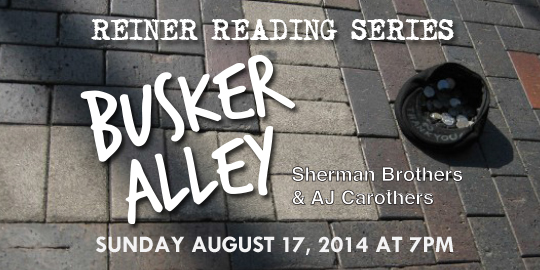 Aug. 17
Busker Alley
Musical Theatre West’s Reiner Staged Reading Series presents Busker Alley, starting at 7 p.m. Aug. 17, at Cal State Long Beach’s University Theatre.
The one-night-only show marks the first time in 18 years the show will be presented in Southern California. Directed by the show’s original star Darcie Roberts, the show also stars Christopher Carothers, son of the late A.J. Carothers who wrote the musical with the famed sibling duo, The Sherman Brothers. Advance general admission tickets are $27 or $32 on the day of the performance.
Based on the 1938 British film, St. Martin’s Lane (American title: The Sidewalks of London, Busker Alley shares the tale of Charlie Baxter, a street performer (busker), and Libby St. Alban whose star is about to be on the rise. In the 1995 touring production, Tommy Tune and Darcie Roberts starred, (titled Stage Door Charley when seen at the Orange County Performing Arts Center earlier that year), however an injury forced Tune to withdraw from the show, scuttling the planned Broadway production. In 2006, Tony Walton, set designer of the original production, persuaded New York City’s York Theatre to put it in front of an audience for a one-night-only semi-staged concert performance as a benefit. This time, the cast featured Jim Dale, the Tony-winning veteran of 1980s Barnum, and Jessica Grové, with a “special guest star” appearance by Glenn Close. The next day, the cast trooped into a recording studio and made the show’s first-ever cast album.
Details: (562) 856-1999 ext. 4; www.musical.org
Venue: University Theatre, California State University, Long Beach
Location: 1250 Bellflower Blvd., Long Beach

Aug. 23
Jean Paul Sartre’s No Exit
Jean-Paul Sartre’s existential masterpiece No Exit is playing, through Aug. 23, at the Long Beach Playhouse.
The play centers on three characters: two women and one man who are locked up together for eternity in one hideous room in hell. The windows don’t exist; there are no mirrors; the electric lights can never be turned off; and no exit. The irony of this hell is that its torture is not of the rack and fire, but the burning humiliation of each soul as it is stripped of its pretenses by the cruel curiosity of the damned.
Tickets are $24 for adults, $21 for seniors and $14 for students.
Details: (562) 494-1014; www.lbplayhouse.org
Venue: Long Beach Playhouse
Location: 5021 E. Anaheim St., Long Beach

Aug. 24
Man of La Mancha
Performances for Man of La Mancha will take place at 8 p.m. Thursdays through Sundays with a matinee performance at 2 p.m. Sunday, through Aug. 24, at the San Pedro Theatre Club.
Miguel de Cervantes, aging and an utter failure as playwright, poet and tax collector, has been thrown into a dungeon in Seville to await trial by the Inquisition for an offense against the Church. There he is dragged before a kangaroo court of his fellow prisoners, who plan to confiscate his few possessions—including the uncompleted manuscript of a novel, Don Quixote.
Cervantes, seeking to save the manuscript, proposes his defense in the form of a play. The “court” agrees, and Cervantes and his manservant don make-up and costumes, transforming themselves into Don Quixote and Sancho Panza. They then play out the story with the prisoners taking the roles of other characters.
Quixote and Sancho take to the road in a quest to restore the age of chivalry, battle all evil, and right all wrongs. The famous battle with the windmill follows, with Quixote blaming his defeat on his enemy, the Great Enchanter.
In a roadside inn—which Quixote insists is really a castle—Aldonza, the inn’s serving girl and part-time prostitute, is being propositioned by a gang of muleteers. Quixote sees her as the dream-ideal whom he will serve forever and insists her name is Dulcinea. Aldonza is confused and angered by Quixote’s refusal to see her as she really is.
The padre and Dr. Carrasco arrive at the inn and are frustrated by Quixote’s lunatic logic. They are interrupted by the arrival of an itinerant barber, and Quixote confiscates his shaving basin, believing it is the “Golden Helmet” of Mambrino.
Later Aldonza encounters Quixote in the courtyard where he is holding vigil, in preparation for being knighted by the innkeeper. She questions him on his seemingly irrational ways , and Quixote answers her with a statement of his credo, The Impossible Dream. Aldonza catches the fever of Quixote’s idealism but, attempting to put it into practice, is cruelly beaten and ravaged by the muleteers.
Not knowing Aldonza’s plight, Quixote and Sancho leave the inn, encounter a band of Gypsies, and are robbed. They return to the inn, only to encounter the disillusioned Aldonza who sings her denunciation of Quixote’s dream in the dramatic Aldonza. The Knight of the Mirrors enters and defeats Quixote by forcing him to see himself as “naught but an aging fool.” The knight reveals himself as Dr. Carrasco, sent by Quixote’s family to bring him to his senses.
At home again, the old man who once called himself Don Quixote is dying. Aldonza, having followed, forces her way into the room and pleads with him to restore the vision of glory she held so briefly. Quixote, remembering, rises from his bed to reaffirm the stirring Man of La Mancha, but collapses, dying. Aldonza, having glimpsed the vision once more, refuses to acknowledge his death, saying, “My name is Dulcinea.”
Back in Cervantes’s dungeon the prisoners have been deeply affected by his story and restore to him his precious manuscript. Cervantes is summoned to his real trial by the Inquisition. The prisoners unite to sing him on his way with The Impossible Dream.
Tickets range from $30 to $55.
Details: (310) 773-4964; thesanpedrotheatreclub.com
Venue: The San Pedro Theatre Club
Location: 624 S. Pacific Ave., San Pedro

Aug. 28
2014 New Works Festival
The Long Beach Playhouse presents the 2014 New Works Festival: Four Nights, Four Winning Plays, Aug. 28 through the 31.
One of the most popular programs at the Long Beach Playhouse is its New Works Festival. Conceived more than 20 years, the New Works Festival invites novice and experienced playwrights from all over the world to submit their unproduced plays to the New Works Literary Committee. Members of the committee read the 100-plus scripts that are submitted.
Four winners are selected and each receives a staged reading. The playwrights hear their words brought to life by actors, hear feedback from the audience and receive detailed written critiques by professional theatre critics.
The 2014 New Works winners and specific staged reading dates and times are:
At 8 p.m. Aug. 28
Children of Camelot by Nakisa Aschtiani, directed by Kate Felton
The Kennedy assassination has inspired countless books, films and conspiracy theories, but Children of Camelot asks, “What if?” What if Lee Harvey Oswald wasn’t murdered in prison? What if he was put on trial? An alternate history of this major turning point in our country’s history, this thought provoking play has us reexamining our assumptions and taking a closer look at everything we thought we knew.
At 8 p.m. Aug. 29
Caesar’s Blood by Rich Rubin, directed by Anthony Galleran
It is late November, 1864. Civil War is raging and President Lincoln was just re-elected. At New York’s famed Winter Garden Theatre, a one-night only performance of Julius Caesar starring the most celebrated American actors of their time, the Booth brothers, is about to begin. John is a fervent believer in the Confederate cause and Edwin and Junius are ardent supporters of Lincoln and the Union. The drama of the bloody tragedy onstage is rivaled by the drama backstage. Family relationships, racism, and egos are all challenged in this provocative drama based on true events.
At 8 p.m. Aug. 30
Sugarhill by Linda Ramsay-Detherage, directed by Anna Kate Mohler
On a hot December evening in 1941, in Sugarhill, La., Marietta Trudeau returns home from a hospital stay following the death of her son. After reading her late son’s composition on The Time Machine by H.G. Wells, Marietta believes the sudden appearance of a dark-skinned fugitive is that of a time traveler from the future who can undo her son’s death. Marietta and her family defy racism and Jim Crow law to protect the man who has given her hope.
At 2 p.m. Aug. 31
Dietrich Danzig by John Pisano-Thomsen, directed by Phyllis M. Nofts
Paragraph 175 of the German Criminal Code in effect from 1871 to 1994 made homosexual acts between males a crime. When Nazis broadened the law in 1935, widespread social persecution took place and the prosecutions that followed resulted in thousands dying in concentration camps. Dietrich Danzig is the fictional story of a successful young ballet dancer and his attempts to survive Nazi Germany. In this compelling drama, love, courage, and perseverance are all tested.
Admission is a suggested $10 donation.
Details: (562) 494-1014; lbplayhouse.org
Venue: Long Beach Playhouse
Location: 5021 E. Anaheim St., Long Beach

Aug. 30
Urban Fruit
The LA Urban Food Movement is screening its documentary Urban Fruit, at 6:30 p.m. Aug. 30, at the Pacific Unitarian Church.
Los Angeles is a city built on farming. In 1920, citrus groves spanned the vista. But after World War II, city development took a different direction and agriculture was pushed to the periphery. Now, farms are so removed from the everyday experience of city dwellers, many urbanites have no idea from where food comes. But things are changing and some Angelinos are taking matters into their own hands.
German filmmaker Roman Zenz spent two semesters at UCLA while earning him MFA in Film. His impression of how disconnected many Americans seemed to be from their food sources was the inspiration for Urban Fruit.
A suggested donation of $10 is requested.
Details: (310) 257-9127; http://pacificunitarian.org/all-event-list/fil-screening-urban-fruit/
Venue: Pacific Unitarian Church
Location: 5621 Montemalaga Drive, Rancho Palos Verdes

Sept. 5
Pocho in the House
Pocho in the House will be performed at 8:30 p.m., Sept. 5 through Sept. 7 at the Found Theatre in Long Beach.
The show usess humor to break down stereotypes and promote cross-cultural understanding. It is a one-man show about growing up as a Mexican-American in California.
Tickets are $15.
Details: (562) 433-3363; foundtheatre.org
Venue: Found Theatre
Location: 599 Long Beach Blvd., Long Beach