Take me to Sardine 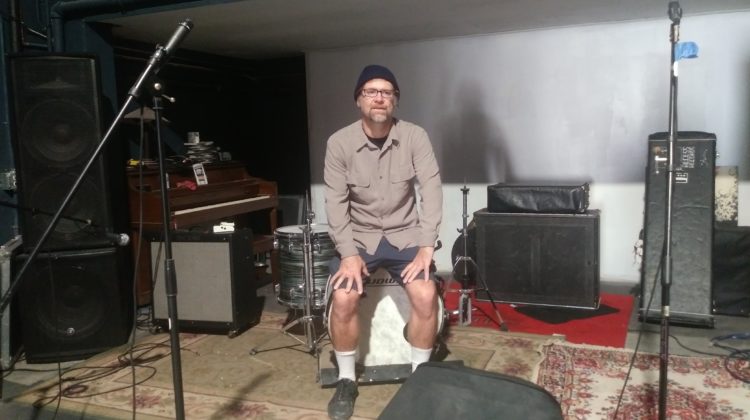 Take me to Sardine

Todd Congelliere is a busy man. The musician and business owner of Recess Ops record distribution company with Isaac Thotz, is also a longtime collaborator with great bassist Mike Watt — who he has just released a new record with. And very soon, Todd and Thotz will open their new San Pedro venue, Sardine.

Though close to completion, Todd still has the blueprints for Sardine and other construction notes spread out across the bar top when this reporter visited him at the San Pedro venue.

The main room once occupied by Ramona’s Bakery is painted entirely in dark blue and covered with distinctive artwork that look like album covers — some of the work was composed by Jamie Morrison, a musician friend in England. Todd noted that Sardine looks as if some boys with bad taste got together to build a clubhouse.

A row of upright skateboards lined high above the entrance seem to illustrate that point with a nod to skate art and culture. Sardine feels inviting. It may be the robust bar facing you as you enter, the art that introduces you to the owners personalities or the old school jukebox or table-top video game in the front room.There is also some rogue art on the outside wall on 11th street — a little cat near the image of the band Devo’s mascot, Booji Boy. It was like a tag Todd said but it’s cute so they kept it.

In remembrance, there is also a big stencil canvas of Mike Watt’s bandmate, D. Boone, which hangs inside the kitchen area, visible through a glass door in the patron area. Boone and Mike formed The Reactionaries in 1978 and later, the two formed Minutemen in 1980 until December 22, 1985 when Boone was tragically killed in an auto accident.

The opening of Sardine comes at an auspicious moment in San Pedro’s history. Momentum behind the development cycle in San Pedro appears to be growing with the announcement of a new project every few months, and a new condo development completed at just about the same frequency around downtown San Pedro and the waterfront areas. Todd is excited about the possibilities.

“Now is the best time more than ever, to do something that represents the town, up here,” Todd said. “It’s 100 percent music focused and nobody’s telling us what to do based on making money.” But after a pause, Todd said, “We’d like to make money though.”

Guitarist and singer, Todd and Mike have played together through each of their multiple band incarnations since the 1990s. Mike of course is co-founder of the Minutemen, Secondmen, Dos, and fIREHOSE. Todd had his solo project, F.Y.P., Underground Railroad, Candyland, Clown Sounds and Toys that Kill. Right now he’s in three other bands including Jumpstarted Plowhards.

See sidebar on Jumpstarted Plowhards new album, Round One at www.randomlengthsnews.com/round-one.

Todd has engineered an album once before for a Canadian band but it’s not what he ever wanted to do for work. In between touring the U.S., Europe, and Japan, Todd released records for fellow punk and DIY bands, eventually having a roster of close to 20 artists on his label.

Starting FYP by himself, as a teenager in the late 80s, the name refers to extra credit, Todd dubbed tapes specifically made to get back at a teacher that was trying to flunk him. The student put the tapes in his teachers desk with lyrics about him. It started as a joke but quickly became something he enjoyed and he soon put his music out on vinyl. With his own drum machine, playing on pads rather than programming, he recorded all the instruments, sung on it and released a 7-inch record with 11 songs around 1989 or 90.

“It’s horrible but I did it,” Todd said.  “Surprisingly, it sold enough copies to make another one. I [made] another FYP, 7 inch and started the label Recess Records.” 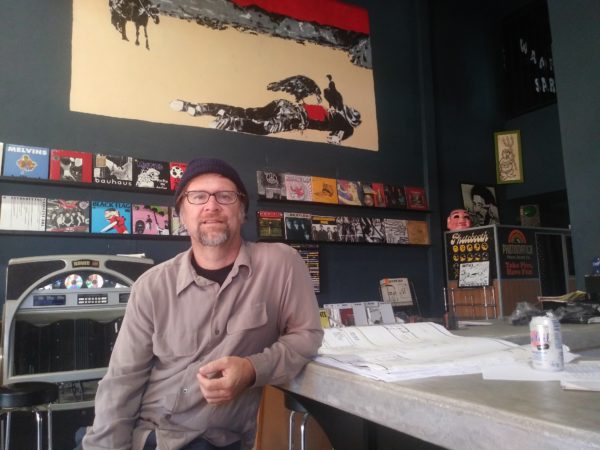 Todd Congelliere at the soon to be open Sardine.

Other bands soon began asking him to put out their material and that’s mostly what he’s been doing for the past 30 years. Todd played with Mike’s band during his FYP days and later more frequently with Toys That Kill. During that time there weren’t too many shows in Pedro he said. So, they started booking house shows, the genesis of the porch-core scene that emerged in San Pedro in the 1990s.

“There was a house on 4th and Gaffey,” Todd said. “It was almost like a club, except for the fact that it was illegal.  Every time we had a touring band, we hosted them there. When Mike discovered the house concerts, he was pleasantly surprised. Then we began playing shows at Harold’s Place and other local bars.”

Todd and his Sardine partner, Thotz also started a record distribution company about 1989. By 1997 they relocated to the bottom floor of a warehouse at 15th and Centre streets in San Pedro where Todd’s Recess Records shop was located. They ultimately performed shows there like the house shows. People showed up to see them play and it put a bug in them.

They didn’t even list an address because they didn’t want the neighbors to get “bummed out.” It was like a speakeasy where you knock on the door before you to enter. They were so successful, Todd said they thought, instead of losing money doing this they gave the bands that were touring all the money they made at the door.

The Community of Sardine

“We’ve been trying to do this now for about 20 years here,” Todd said. “It’s just that we haven’t had a constant  control over which spot we will do it at. It’s always at the mercy [of club owners] never paying the band enough to get back out on the road. If you pay them good, they will be back.”

They soon realized this could really work if they could sell beer and just do this somewhere “legit.” Then it snowballed into Sardine. They canvassed the nearby neighborhood to ask neighbors about their thoughts on a venue.

“We felt it was the right thing to do, to make sure that if there was anybody opposed to it, [we’d] tell them that we’re not just opening up some strip club,” he said.

Many people were very positive about it and took the opportunity to ask more about their plans, adding that they were coffee fans. Everything resulted from their discussions with the whole neighborhood. Plus, they will have a record store inside and sell coffee. Todd called it the swiss army knife of fun places.

They anticipate having a grand opening in late November when they hope to bring a show with Mike Watt and Toys That Kill in the back room of Sardine called Recess Ops — after their distribution company.

Their sound partner, Barry Johnson came up with the name Sardine, which Todd adds is perfect for this city. There was a suggestion that during prohibition there used to be Sardine Bars that were just called that but once you went inside, alcohol was flowing. He hasn’t been able to confirm this but he’s happy to go with that idea.

They plan to invite various music genres — not limited to a type of music but more about the feel of it. Todd added many new bands are popping up. He likes to always book a local band with a touring band. They plan to invite bigger acts that are probably “too big” to play but because its San Pedro they can maybe go unannounced, “nothing too crazy but big for the underground.”

“It’s a totally unique place to be because we are not in the markets of Los Angeles or Orange County,” Todd said. “That’s where national touring bands go. They never come here. It’s almost like there’s this appeal to come play here because they’ve never done it.”

Todd gets requests from bands that would never come here which he said is cool because they can pair them up with local bands that will get a bigger following and then they can come back and headline at Sardine.

Todd thinks people have it in their heads, “we’re going to go play in Pedro and it’s going to be awesome, but we’re not going to get money.”

“That’s not right,” Todd said. “If a show is packed the bar is probably making more money than L.A. Because LA’s overhead is way more than in any place in Pedro. It’s just never made sense to me that a band can’t get a fair shake. We’re trying to sustain it and everybody involved.”

It’s hard to make money off record sales so most bands tour. They make money off their t-shirts and the door money. And for them to come back and do this for you again, you’ve got to pay them. We are trying to get people in that mindset.”

Todd has gotten more response about Sardine from people he’s never met or who haven’t seen their show.

“I feel like it’s something – not by design, so we’re not taking the credit but I feel like it turned into something that’s for a wide range of people that live here,” he said. “Like it’s going to exceed their expectations. This town is more supportive than most. It’s much different than LA. [San Pedro] has an intention to support local businesses and you see it with a coffee shop, or bakery opening up. You see there is a willingness to support it even if there is not an interest in the product. It’s almost weird… That’s nice, it doesn’t happen everywhere.”

This all began when Todd wanted retribution for a teacher trying to flunk him, which he quipped he can acknowledge. School for him wasn’t fun because he skated and listened to punk music. Now, that is easily acceptable but back then it wasn’t. It was a nightmare he said but even looking back now, he probably wouldn’t be doing what he does today if it wasn’t for that time.

When Todd was a skater kid in the late 80s to early 90s, it was a less innocent and less open time for different types of music than the decade before when Watt came through. To Todd’s experience, society looked down on punk rock.

“People thought, ‘these guys are up to no good,’” Todd said. “Then somewhere along the line, it became cool. Someone probably spinned an article …it’s always been art but to some people an article will turn it into art for them. They just never saw it. They saw it as being detrimental to society.