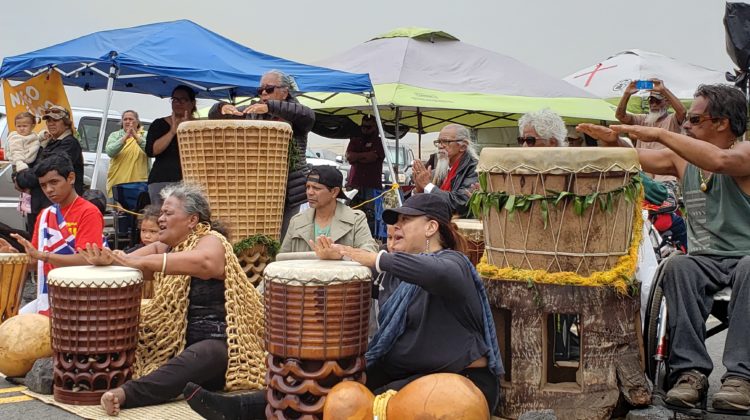 Mauna Kea Volcano, Hawaii — As we go to press, the protests and camp by Hawaiian indigenous people on the Big Island ends its second month.

Several thousand indigenous people and their allies, including indigenous nations’ representatives from around the world have joined in this peaceful/direct action protest against the construction of a massive new telescope on the summit of Mauna Kea volcano.  Indigenous people’s view the proposed construction as a desecration of their land.

The indigenous encampment consists of more than 100 tents, a full kitchen, medical center, a commissary with food and clothing for attendees and a functioning university with ongoing workshops.

This reporter had an opportunity to attend a 600-person protest on Aug. 24 and interview several leaders. There were simultaneous protests in six other cities on the Hawaiian Islands.

As one of the leaders, Andre Perez, told Random Lengths News: “We are involved in direct action to uphold justice and protect our sacred mountain Mauna Kea, to take a stand for the future… This is not the first action, in 2015, we held off the Thirty Meter Telescope (TMT -group of universities financing the new telescope construction)”. He explained how they exhausted all legal means and were now blocking the road to prevent mountain desecration. (Of course, this land desecration, colonization and colonial treatment of the Hawaiian indigenous peoples has taken place for several hundred years). “Kapuna, our elders, have taken the lead in setting up a blockade, basically an entire camp…” They created a traditional place of refuge that historically goes back to Hawaiian warriors… a land based sanctuary.”

A central leader of these actions is Kaho’okahi Kanuha, a direct descendent of a great Hawaiian warrior. This mountain has faced severe desecration and mismanagement by the Bureau of Land and Natural Resources and the University of Hawaii.

All 13 telescopes, since the first in 1968, were built without Native Hawaiian input. “We are now in a time when our people are awakening and rising,” Kanuha said. We now remember our history and culture, the truth of our status as a people and as an illegally occupied kingdom….  We will no longer tolerate the further marginalization of our people… The state and the system has failed us as a people.” Opponents argue that they are not anti-science, but that they don’t want a telescope with the footprint of a Costco on their sacred mountain.

“That is a challenge for most Western people to understand, because we don’t have buildings and churches,” said activist Mr. Wong-Wilson. “We have a belief system that is based in nature and our environment.”

There have been no confrontations with police since the occupation.  Thousands of supporters on all the islands are flying the Hawaiian flag upside down from their truck beds, houses and front yards.

Like the protests at Standing Rock two years ago, over the Dakota Access Pipeline, the battle over Mauna Kea is part of a larger struggle over indigenous rights and the legacy of colonialism.

Protesters urge people to come visit and stand in solidarity. Follow them on Puuhuluhulu.com and on Facebook at Pu’uhonua o Pu’uhuluhulu Mauna Kea.