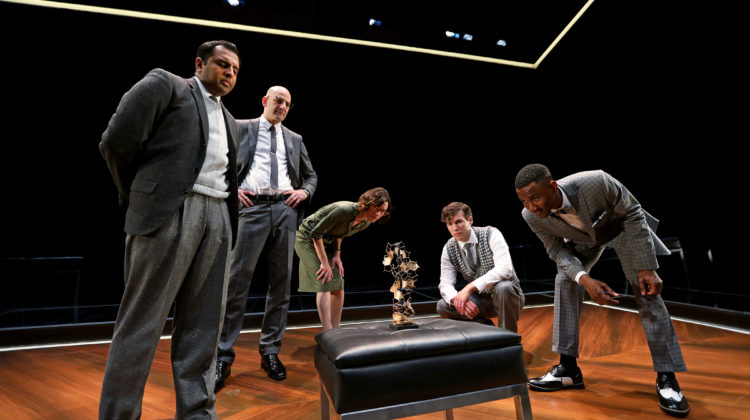 “Photograph 51” Invites Us to Examine More than History & DNA

In some ways it seems Rosalind Franklin never cracked the code. She was regarded as brilliant and beautiful, yet she had no close friends and perhaps no romance in her life. She was greatly respected for talent, yet peers did not generally like working with her. She produced the x-ray diffraction photograph that was the basis for intuiting the shape and replicational mode of the DNA molecule, yet she was unable to correctly interpret her own data. Then, at 37, she was gone, a victim of cancer perhaps caused by the work that is her legacy.

It’s a hella sad story, but playwright Anna Ziegler mostly avoids overt sentimentality in her dramatization of Franklin’s working life during the two years leading up to the discovery that would garner a Nobel Prize for three of her colleagues.

As soon as Franklin (Helen Sadler) arrives at King’s College London and meets Maurice Wilkens (George Ketsios), things start to go wrong. Through no fault of their own, they are under different impressions about what her role will be in Wilkens’s lab. But while Wilkens does his level best to smooth things over, Franklin can’t be bothered. Or doesn’t know how. And when he genuinely warms up to her, we witness the aloofness that will later keep her off the Nobel pantheon.

Far more than a work of biography, Photograph 51 is a consideration of how we connect ― or fail to connect ― with our fellow humans in this thing called life. And although Ziegler misses the chance to explicitly delve into the question of how each of us comes to a person who can or cannot make the connections that will most behoove us, it takes only a slightly metaphorical faculty on the part of the audience to go there. Going there is what makes Photograph 51 most rewarding, because Franklin herself neither knows the answer nor can do anything about it, and it’s quietly heartbreaking.

Wilkens is not her only missed opportunity. When young, enthusiastic James Watson (Giovanni Adams) visits to compare notes with this fellow scientist of whom he is a great admirer, she won’t give the time of day. Then there’s Don Caspar (Josh Odessa-Rubin), whom she sees socially and genuinely fancies. But in one of Ziegler’s best moments, when Caspar asks her what she wants, we are privy to a speech she gives only within the confines of her mind:

So many things: to wake up without the weight of the day pressing down, to fall asleep more easily, without wondering what it is that’s keeping me awake, […] to be kissed, to feel important, to learn how to be okay being with other people, and also to be alone. To be a child again, held up and admired, the world full of endless future. To see my father looking at me with uncomplicated pride. To be kissed. To feel every day what it would be to stand at the summit of a mountain in Wales, or Switzerland, or America, looking out over the world on a late afternoon with this man sitting across from me. Or to feel it once.

Then we hear what she actually tells him: “I don’t know.” Sad, sad.

Sadler plays all this with proper reserve, inviting you close if you really want to know Rosalind Franklin, rather than projecting to the cheap seats. There was, however, an affecting emotional display during the performance I saw. As the play wound to its conclusion, Franklin told us of her ovarian cancer, and a few members of the audience gasped. Apparently this got to Sadler, creating a little catch in her voice during her next lines. Perhaps this was an actor deeply sympathizing with her character. Perhaps it was that character’s experiencing the self-pity that empathy sometimes invokes. Doesn’t matter. It was a powerful moment, beyond conscious choice, emanating from the mysterious source of all the best acting. Sadler is in tune with Franklin, no doubt.

The rest of the cast is solid, but considering that it is only Watson whose personality truly diverges from good old-fashioned postwar British reserve, there are not a lot places for anyone to go. Their heaviest lifting may be in talking to the audience. Ziegler constantly breaks the fourth wall, a convention director Kimberly Senior pushes even further by keeping all of the supporting characters onstage throughout, taking in the action upstage, then coming off their seats to deliver narrative like NBA reserves coming off the bench. This is Alienation Effect 101, and it won’t work unless all hands on deck can give it an organic flow. They do.

The production’s major shorting coming is the lack of variety in the presentation. Photograph 51 is 100 uninterrupted minutes of minimal aesthetic ― no sets (other than a sloped floor), no props, only the occasional touch of ambient music and a few minor shifts in lighting. It’s really just a half-dozen actors standing still or walking (mostly in circles) and talking, with no breaks in mood or mode. It’s going too far to say things get boring, but even a single decisive break from the same-same would go a long, long way to enlivening the overall experience.

Despite this failing, Photograph 51 is worthy, speculative examination of both Rosalind Franklin and our (in)ability to connect. We already knew she did not share in the Nobel Prize that went to Wilkens, Watson, and Francis Crick, and we can learn about her work from science and history books. But this play is a chance to meditate on what she may have been beyond the margins of such texts and what else she may have missed out on. And in so doing, we might take away a new picture of how we play out our own stories. After all, the secret of living is not confined to our DNA.