For weeks, hundreds of thousands of people have filled the streets of 160 cities across the country, even during the coronavirus pandemic, expressing their outrage and grief at the murder of George Floyd in Minneapolis. Two Black leaders of the CFT, with long histories of fighting for racial equity, say they could not help being profoundly moved by the murder itself, and the outpouring of rage in response.

“We have a basic expectation that we won’t be murdered by the police, that we have due process,” says Angelo Williams, who’s taught sociology at Sacramento City College for 13 years. “But when it comes to Black and Brown people, that’s not what we get. Every student knows this. We can’t continue this way one more day.”

Carl Williams (no relation to Angelo Williams), a Lawndale elementary school custodian and president of the CFT Council of Classified Employees, was so deeply moved that “I haven’t watched the whole recording of George Floyd to the end. I can’t do it. As a Black man, I’m shocked but not shocked. It’s not something we should be used to, but we are. So when people say, ‘Not one more time!’ I say, ‘Absolutely!'”

While deeply disturbed by Floyd’s death in Minneapolis, in interviews both respond immediately that the deaths of Black men at the hands of the police are a fact of life much closer than Minnesota. “I lived in L.A. when we went into the streets after Rodney King was beaten,” Carl Williams recalls. “I’m a lot wiser now than I was then, but some things don’t change.”

In the national avalanche of people into the streets, people hold signs remembering the murders of Breonna Taylor, Ahmad Arbery, Tony McDade and others in a plague of violence visited on Blacks, not just recently, but since slavery.

Angelo Williams remembers the community grief and rage that met the murder of Stephon Clark two years ago, by Terrence Mercadal and Jared Robinet, two officers of the Sacramento Police Department. He was shot eight times, six in the back, standing in the backyard of his grandmother’s house with a phone in his hand.

“We don’t have to look at far off places,” he reminds us. “We should focus on cases here in California, starting with Stephon Clark. The police officers who murdered him must be fired and tried. We must make them face the music. This was a police murder here, in our state capital.”

He also emphasizes that while Black men suffer this violence more than any others, people of color and women in general are targeted. “Latinos are murdered too, like Andy Lopez in Santa Rosa.” Lopez, a 13-year old boy, was shot as he was walking with a BB gun, by a deputy sheriff who was never charged.

Both men, however, believe that the massive protests, going on for 14 days;at the time of this writing, show clearly that something has changed, and that stopping police murder is possible. And they also believe that the union has a role to play in making that happen.

Four years ago the two participated with over a dozen other CFT members in the Racial Equity Task Force, set up in response to a resolution passed at the CFT Convention in 2016. The task force hammered out, over the course of a year, “Reclaiming the Promise of Racial Equity for Black Males in California,” a pioneering report setting goals for moving towards racial justice in the state educational system, and in the union.

The report warned that while “we can celebrate the progress made toward racial equity by the various historical and new movements for civil rights and racial equity… each key moment of progress was followed by backlash aimed at maintaining the status quo of structural racism.”

Key to the report, Angelo Williams explains, is that “we used an equity framework, instead of one seeing Black men as a problem. We have value and knowledge. Black teachers can change the trajectory of students because of their perspective on American culture. We should welcome African American men as teachers. I became a teacher because my father and grandfather were teachers. Black men are valuable to the union.”

For Carl Williams, working as a custodian at an elementary school gave him an important presence. “The role of any classified worker is unique,” he explains. “We interact with students when they’re not in the classroom and governed by classroom rules. We have a connection to African American boys, because they feel comfortable with people who look like them. When they see us, they recognize us as family. Maybe their dad works in a uniform, or they have a mother in food service, who looks like us. Plus, they see us out in the community, because most classified workers live in the district where they work.”

How then does the work of Black classified workers and teachers translate into political power that can stop police violence? Both men caution that there are no easy answers. “I don’t know if the work we do at school can change police brutality,” Carl Williams warns. “We wind up preparing kids for interactions with police, because it’s their survival. We shouldn’t have to do that, but it’s where we are.”

Still, he believes in the power of the union to create change. “First, we need to recognize who’s being murdered,” he says. “I look at what happened to George Floyd and think, how would I feel if he was one of my students? George Floyd was somebody’s student. Then we have to let our voices be heard. Let us create opposition. And let us lift up those in our organization who should be heard, and not be afraid to stand up for what’s right. We must stand up and be vocal.”

Angelo Williams thinks that the power of the union comes from solidarity. “It’s built into our DNA. It’s the core architecture of the union. From the locals to the national, we need to speak with one voice, and say that this cannot be tolerated. We must hold people accountable, from police officers to the president of the United States.”

Getting into the streets is part of it, he says, participating in peaceful protests wherever they are. “We can be the example,” he emphasizes. ” We need to be there, so these protests are not seen just as fights between protesters and the police. Unions are organized to bring people together. Our union has power, a history of solidarity. We understand how to change laws, how to organize.”

Both credit CFT President Jeff Freitas for reaching out in the process of writing the union’s first statement about the Minneapolis events. “The murder of George Floyd by a police officer was an unspeakable act of violence, and our communities across the country are responding to his murder with understandable grief and rage,” the statement says.

“But we know this is not an isolated incident. Black communities, and especially Black men, are exhausted and terrified because of the omnipresent structural and institutional racism they experience every day that often leads to violence against them. As a union of educators and classified professionals, our work includes taking action to dismantle the systems and structures that uphold anti-Black racism in our schools and our communities.”

Carl and Angelo Williams are both thinking about how the union should continue to speak, and beyond speaking, to organize. Carl Williams has been drafted onto an AFT committee, where he’ll meet with AFT President Randi Weingarten and several others to consider next steps.

“I’m bringing to it my experience as a Black man living in L.A.,” he says, “which has a history of these acts, and Black men and Black students know this. Today social media is bringing tools and knowledge to the fingertips of young people. We should encourage them, while we speak to their fears and tell them how it is for us. Social and racial justice are at the core of what our union is all about. We would be remiss if we stood aside. We can’t stand aside or be silent.”

Both men look toward November, as well as at the immediate protests. Angelo Williams says that during the period before the election, the country still needs a president who can “demonstrate some heart and soul and human empathy, who can understand that the right to protest is an American right, and allow the voice of the people to be heard. And then the youth in the streets – putting their lives on the line – should bring their ballots with them and put them in the mail. A referendum on this president is coming no matter what.”

The most important thing, they believe, is that the union and its members must act, and do so in accord with its history and principles. “Labor unions are social justice organizations,” Carl Williams emphasizes. “It’s what unions are all about. And that makes it very appropriate for us to take part in protesting. So let our voice be heard.”

“Let’s get up and get active,” Angelo Williams urges. “It’s not too late for us to have our voices count.”

BERKELEY, CA – 13JUNE20 – Hundreds of union members and outraged people march through the streets of Berkeley to protest the police murder of George Floyd in Minneapolis, and other African American and people of color killed by police.  The march was organized by the labor councils of Alameda, San Francisco, Contra Costa and San Mateo Counties, and Service Employees International Union Local 1021.

STUDENTS MARCH TO PROTEST THE POLICE MURDER OF GEORGE FLOYD

BERKELEY, CA – 09JUNE20 – Hundreds of students, teachers and outraged people march through the streets of Berkeley to protest the police murder of George Floyd in Minneapolis, and other African Americian and other people of color killed by police. 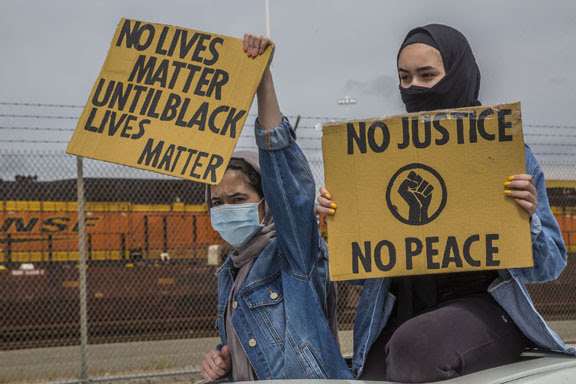 OAKLAND, CA – 31MAY20 – Thousands of people participate in a caravan of over 2000 cars from the Port of Oakland, to protest the police murder of George Floyd in Minneapolis, and African American and people of color killed by police.