Photographs by David Bacon, The Progressive, 3/30/20

These photographs document the date palm workers, or “palmeros”.  They are a window into their lives, showing their living conditions and the pain of exploitation.  They document families, homes, and the culture of indigenous Purepecha people from the Mexican state of Michoacan – the main indigenous group in the farm labor workforce of the Coachella Valley.

In the Coachella Valley, where the date farms are concentrated, the industry brings in $65 million a year.  Despite this, many Coachella farm workers live in trailer parks in colonias, or informal settlements, near the fields under the valley’s intense sun.  There are not many “palmeros” – perhaps only two hundred. Outside of Arabia, Iraq and North Africa, date palms are only grown here.

The work is dangerous – the palms rise from twenty to sixty feet above the sandy desert floor of the Valley.  The photographs show the work process in which workers climb into the trees on ladders, or in more recent years on cherry pickers – mechanical lifts – and then walk around the tree’s crown on the palm fronds as they work.  In the course of a year, a “palmero” has to go up into the palm trees seven times.

The first operation is depicted here – the pollenization.  Date palm trees are dioecious – they come in sexes. The flowers of the male palm produce the pollen.  It is the female tree that produces flowers that become the seeds, and which therefore bear the fruit.

These photographs are part of a larger body of images and oral histories that I began in Coachella in 1992, and which continues today.  The archive of this work is in the Special Collections of the Green Library at Stanford University.COACHELLA VALLEY, CA – 2017 – Jose Cruz Frias, a “palmero”, works in a grove of date palms.  He climbs the trees on a ladder, and once up in the tree he walks around on the fronds themselves.  This is one of seven operations that must happen to the trees each year to get them to bear fruit. Cruz has been doing this work for 15 years.  He originally came to the Coachella Valley from Irapuato, Guanajuato in Mexico. 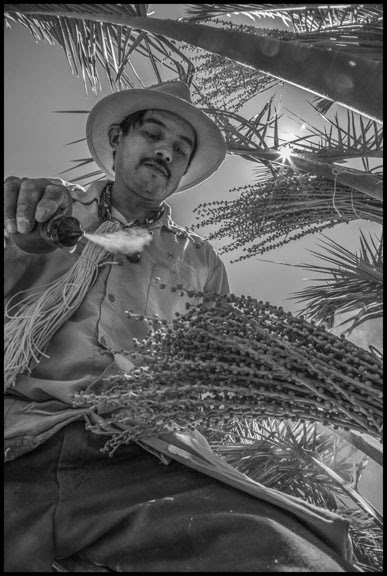 COACHELLA VALLEY, CA – 2017 – During this phase of the work, Jose Cruz Frias sprays pollen from a small bottle onto the buds that will become the dates, and ties the bunch together with string. This is one of seven operations that must happen to the trees each year to get them to bear fruit. 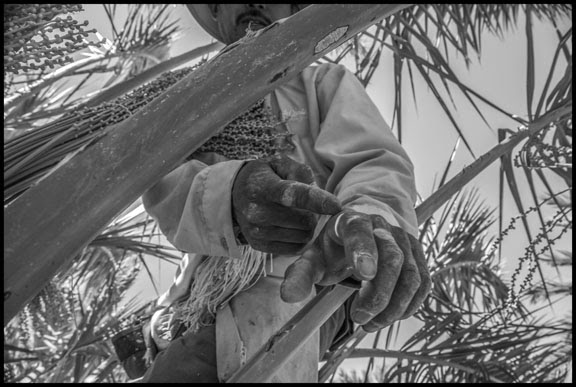 COACHELLA VALLEY, CA – 2017 – Jose Cruz Frias, a “palmero”, points to scars on his hand from the knife and the spines of the tree. 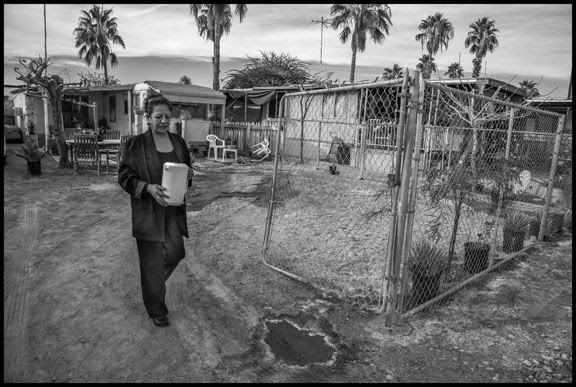 COACHELLA VALLEY, CA – 2010 – Ana Sanchez lives in the St. Anthony’s Trailer Park near Thermal, in the desert in Coachella Valley.  The water supply of the park is contaminated, and Sanchez and the other residents have to get their drinking water from a tank. 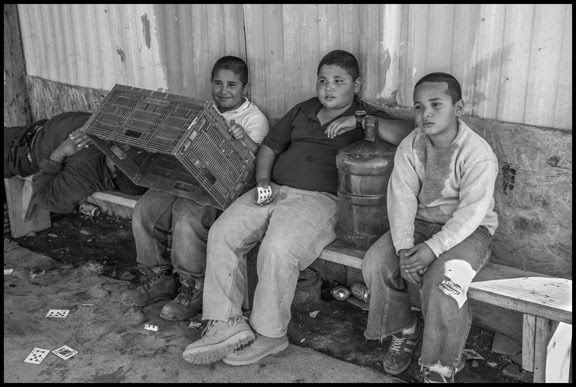 COACHELLA VALLEY, CA – 2010 – Children in the St. Anthony’s Trailer Park, in the desert in Coachella Valley. 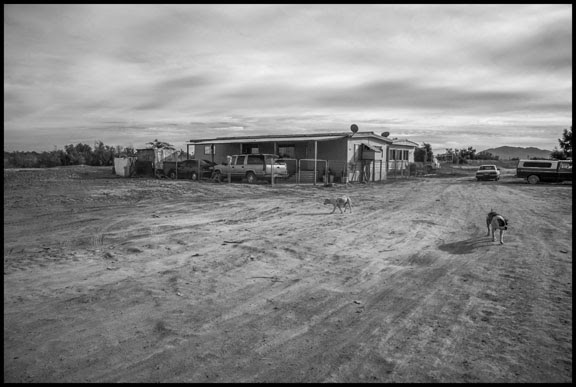 COACHELLA VALLEY, CA – 2010 – Trailers in the St. Anthony’s Trailer Park near Thermal, in the desert. 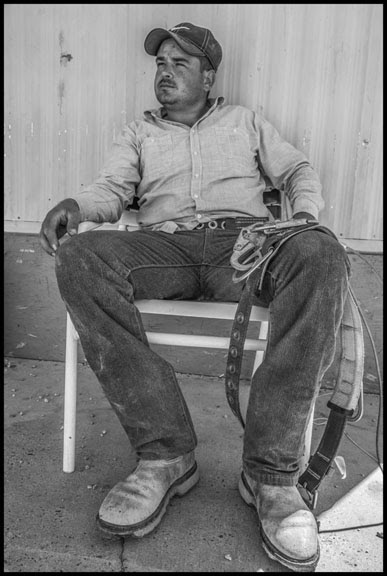 COACHELLA VALLEY, CA – 2017 – Alberto Castro works as a “palmero”, in the date palm groves of Coachella Valley, and has worked over 15 years in the trees.  After work he sits in the shade of the trailer where he lives in a trailer park near Thermal. He holds the safety harness he is supposed to use when working, but it restricts his ability to work quickly, and he is paid by the piece rate, so he often doesn’t use it. 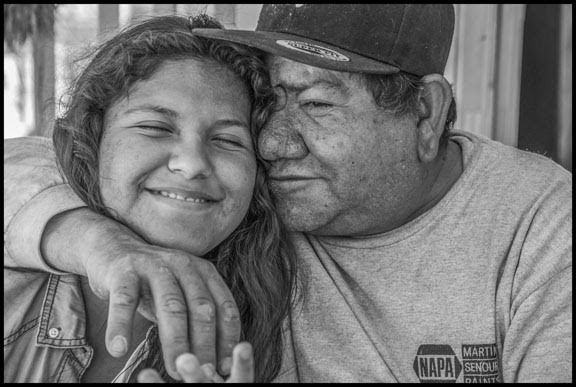 COACHELLA VALLEY, CA – 2017 – Carlos Chavez works as a “palmero”, and has worked over 20 years in the trees.  After work he sits in the shade of his trailer with his daughter Michelle. Michelle is in high school, trying to win a scholarship so she can go to college.  Carlos took her to work with him one summer, but she didn’t like it, and says it motivated her to study harder. 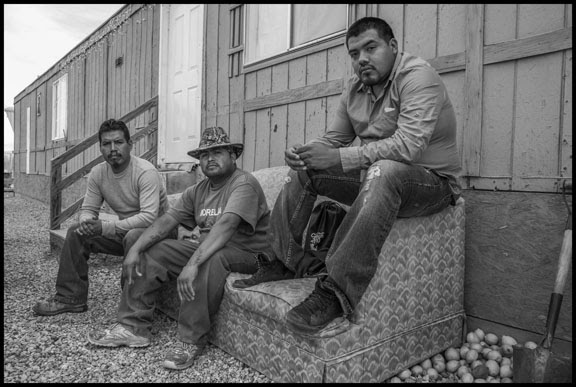 COACHELLA VALLEY, CA – 2010 – Meregildo Ortiz (l) is the president of the Purepecha community in the Coachella Valley.  Purepechas are the main indigenous group in the Mexican state of Michoacan, and many live in the trailer camps in the desert near the Salton Sea.  They work as farm workers in the fields of the Coachella Valley. Seated with him are Max Ortiz and Julian Benito. 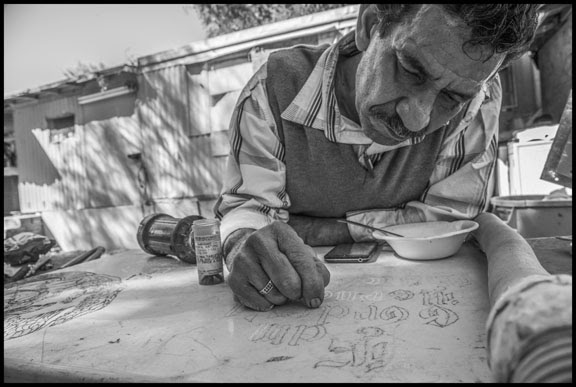 COACHELLA VALLEY, CA – 2017 – Arturo Cordoba, an artist in the Desert View Mobile Home Park, outlines lettering he will carve into a wood plaque. 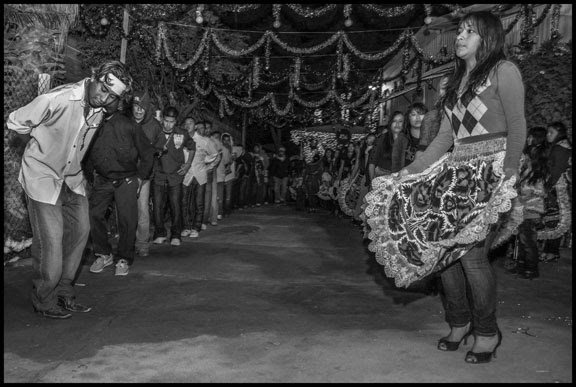 COACHELLA VALLEY, CA – 2010 – Members of the Purepecha community in the Coachella Valley gather at night to rehearse the Danza de Los Ancianos (the Dance of the Old People), preparing to perform it during a procession celebrating the Virgin de Guadalupe.  This is also an opportunity to teach young people the dance and music traditions of the community. 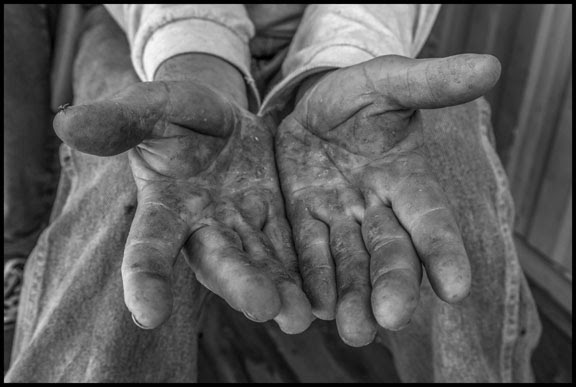 COACHELLA VALLEY, CA – 2017 – The hands of Carlos Chavez, a “palmero”, show the lines and creases of 20 years of hard work in the date palms.

TAKE A VIRTUAL TOUR OF THE EXHIBITION

Newly organized Tartine Bakery workers in the Bay Area need your help and assistance!  This fund, supported by the International Longhsore and Warehouse Union, will help hose workers unable to collect unemployment insurance.

The exhibitions in the following list were scheduled before the current COVID-19 crisis.  Public gatherings are not now taking place and these exhibitions have now been postponed or rescheduled.

Community Organizing Beyond the Farmworkers’ Movement

IN THE FIELDS OF THE NORTH / EN LOS CAMPOS DEL NORTE

MORE THAN A WALL – THE SOCIAL MOVEMENTS OF THE BORDER