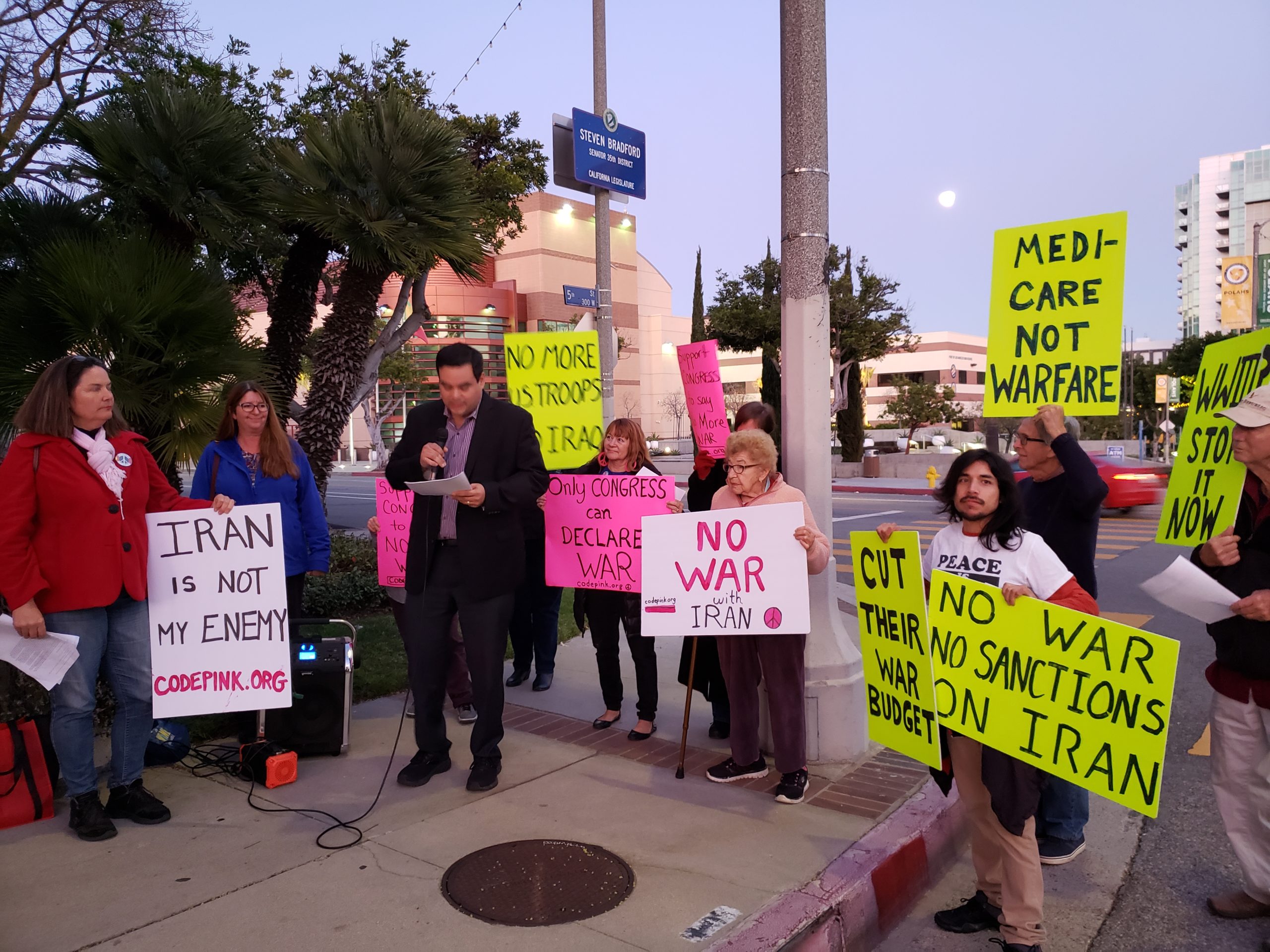 By Mark Friedman
Covering the demonstration in San Pedro against the U.S. war actions against Iran, brought back old memories of long-ago demonstrations against an American campaign of deceit, fear and false pride that produced an earlier massacre in the Middle East. I became angrier and angrier as I remembered the lies about alleged weapons of mass destruction fed to us by almost all politicians and the news media (with few exceptions) to get our support for this massacre that began a 17 year U.S. involvement in destabilizing the entire regime, causing millions of deaths and scattering populations so that big oil could reap the profits and the U.S. government impose regimes to their liking. Then as now, I participated in demonstrations and urge all Random Lengths News readers to do the same.
As Washington prepares the public for an escalation of war in the Middle East we must all publicly and loudly denounce Washington’s assassination of Iranian military commander Qassem Soleimani (no friend of working people in Iraq, Lebanon, Syria — or Iran); Abu Mahdi al-Muhandis, a leader of the pro-Tehran Kataeb Hezbollah militia; and other militiamen near the Baghdad airport Jan. 2. The U.S. rulers act as judge, jury and executioner, trampling on the sovereignty of other nations — just as their cops do here every day to working people at home.
Collectively we must call for the immediate, unconditional and total withdrawal of U.S. troops, bases, weaponry and armaments from Iraq, Syria and the region. Resolving the crisis facing people across the Middle East is the business of workers and farmers there. Join protests against Washington’s escalation.
The U.S. press, like the regime in Tehran, tries to present Soleimani as a leader who came to power as a result of the 1979 Iranian Revolution. In fact, his rise was part of a counter-revolution, one that pushed back the gains made by workers, women and oppressed nationalities by the 1979 revolution that overthrew the U.S.-backed dictatorship of the Shah there. That upheaval was a deep-going, modern, popular social revolution.
Tehran’s efforts to expand its counterrevolutionary reach have been the target of mass protests, in Iran, Iraq and Lebanon.
For several weeks, hundreds of thousands of Iraqis have joined protests demanding an end to both Iranian and U.S. interference in their affairs. More than 450 demonstrators have been killed and thousands injured, many of them at the hands of the reactionary Shiite militias that Soleimani traveled to Iraq to help organize. But none of this excuses the U.S. imperialist intervention in Iraq and the region. There are over 50,000 U.S. troops on the ground and a massive arsenal of warplanes, tanks, missiles, drones and other armaments in the Middle East.
U.S. rulers’ war policy is bipartisan
While many Democratic Party politicians criticized the Trump administration for the attack, seeking partisan political advantage, in and out of office, they have joined in presiding over the U.S. wars there for more than 30 years.
Democratic Party presidential candidate Joe Biden said he agreed that Soleimani “deserved to be brought to justice,” complaining only that President Trump needed to give an “explanation” of how his administration plans to protect “our troops” and “our interests.” But there is no “our.” These troops are tasked with executing the goals of U.S. imperialism and their “interests.”
Remember the famous picture of Biden, along with Pentagon officials and President Barack Obama and Secretary of State Hillary Clinton sitting in the White House War Room, avidly watching the special forces killing Osama bin Laden and his family at their compound May 2, 2011.
The simple truth is that both the Democrats and the Republicans are the parties of imperialist war. Today the Trump administration is sending more troops to the Middle East.
The people of Iraq have been fighting to regain their nation’s sovereignty, to find a way forward to unite working people and take control of their own destiny. The best way to demonstrate solidarity with them is for working people in the U.S. to demand U.S. hands off Iraq, Syria and Iran. Get out now!