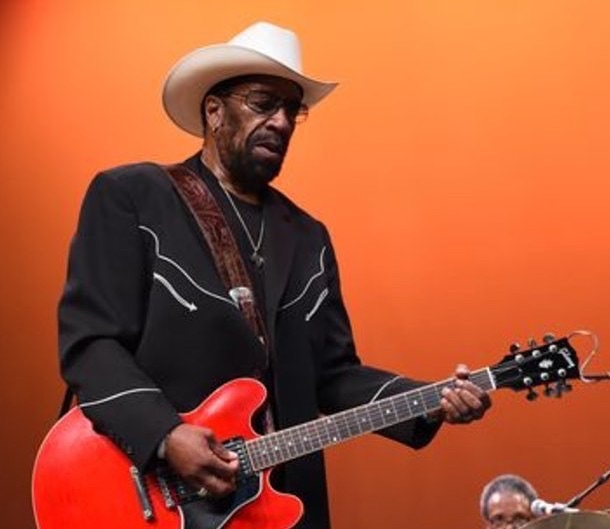 Editor’s note: The following is a transcription of Scott’s interview on various topics, from the inspiration for the songs “Slippin into Darkness” to “Cisco Kid.” The text in itallic are transitions written by editorial for contextualization and readable transitions.

There was a club in San Pedro called the Harlem Hotspot. Do you remember a guy named Johnny Otis? Johnny Otis had a hit T.V. show in the ‘50s and he would come out of this club in San Pedro called the Harlem Hotspot. It was a pizzeria and a TV show and it played nothing but the blues. All San Pedro was nothing but the blues. All the black people would tune into the Johnny Otis Show. He was a white guy. The only white guy that you could name who wanted to be black. So he never claimed to being white. He always led people on to believe he was a very fair skinned black man. But he could play that piano and he was always surrounded himself with top rate black musicians like Ester Phillips. He had these three big fat girls with him on stage called Three Tons of Joy and they were big ol’ fat girls too man, but they could sing their heinies off. They were on the stage with him, Little Arthur Matthews and the Handsome Mel Williams but that was coming out of San Pedro. Coming out of San Pedro! I was playing with some of the blues greats.

I played at the Marine Room, some clubs were so dark… I was 15 and 16 years old playing in those clubs, man. So a lot of them I was scared to go into and my father would take me there and stand up there and watch me play all night and made sure I got paid.

Leo’s, on First and Gaffey in San Pedro, was another club Senior played.

I played at every dive you can name from L.A. to Long Beach. There was one club on Central Avenue that I was afraid to go to called The Hole in the Wall. If you didn’t have a cut on you when you went in, you would have a cut when you came out.

Senior recalled a club in Wilmington with a dirt floor at which he performed but couldn’t recall its name. Senior pulled names from the recesses of his memories such as Joe Sproul and TJ Sommerville — Senior said TJ Sommerville, with whom he played bass guitar, was a guitarist. Senior thought highly enough of Sommerville to compare him to Jimi Hendrix.

“Back in those days, the Navy was all in San Pedro. So, yes, we had sailors up and down the street and hookers on the street and the bars were jumping and the sailors were getting drunk and going to jail and the music was crackin’. I’m tellin’ you, San Pedro was the place to play music, my friend. Everything was there.”

Genesis of The Cisco Kid
The song “Cisco Kid” was inspired by the 1950s television show of the same name, the diversity of the neighborhood he grew up in San Pedro and an incident at a Manhattan Beach venue at which he was performing also called Cisco’s.

For Senior, The Cisco Kid was the first television show in which the protagonists were played by nonwhite actors. The television series starring Duncan Renaldo as the Cisco Kid and Leo Carrillo as Cisco’s sidekick, Pancho were technically desperados wanted for unspecified crimes but were viewed by the poor as Robin Hood figures who assisted the downtrodden when law enforcement officers proved corrupt or unwilling to help.

“When I was growing up in San Pedro, there were black people and there were brown people. And everytime I looked on T.V. I always some white guys playing on it… Cisco Kid was my cowboy idol.”

Senior recounted having a conversation with a homeless man at the bar. The man was asking Senior to play a song for him before a bouncer threw the vagrant out despite Senior’s protest that the homeless man “was a friend of mine.”

“So when the band War needed a song when Burdon left the band, this was the song. The thing is, when you listen to the words of the song…slippin into darkness When I heard my mother say… son if you do this, you’re going to pay. And I’ve paid several times.”

Genesis of Slipping into Darkness
Scott wrote “Slipping Into Darkness” when the band’s name was Eric Burdon and War. They were on their first world tour. For some young twenty-something musicians out of the Harbor Area, the entire experience of traveling and performing abroad was new to them.

“I have a size 11 foot, but the boot was a 10 ½. I got it on and the man was not going to let me walk. out the store with that boot on. So he snatched and snatched and snatched… he got the boot off but he also snatched my back out. I was in total pain and I’m walking around in the shape of an “S” … my head is one side and my hips on the other side. A doctor came in and his name and he gave me a shot of demerol.”

Scott explained that when he woke up the next day, he recalled what the words “I’m slipping into darkness, and thought it made a great song title. He said he it took him a day to write the song to go with the song title. He immediately took the song to Eric Burdon who didn’t particularly care for the song after listening to it.

War Music in Senior’s words
What made War so different from everybody else is we didn’t play black bubble gum. We played hardcore street music… the people’s music. Every band that came up behind us had a horn section. Our horn section was a harmonica and a tenor saxophone, which nobody did until that point until today. Nobody have done that. That made us sound different, we had a message, a different feel—a funk feel, and we grew up coming out of Compton, Long Beach, and grew up with Mexicans and black folks, we had that whole Latino thing coming with us. We was ready for the world.