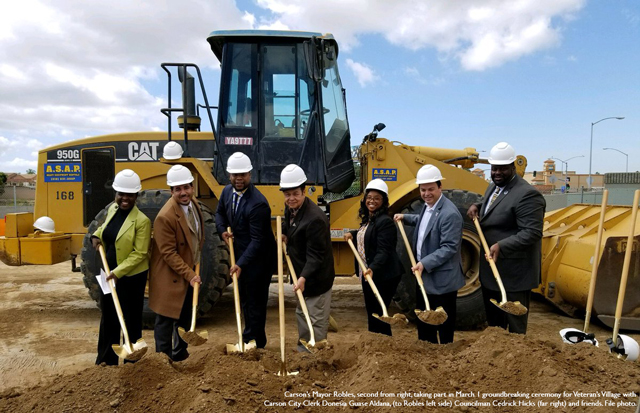 Via text message, the Carson mayor lays out his beef with the D.A.’s office and critics

Carson’s mayor, Albert Robles, has been on a roll for the past year in finding and securing new streams of income for the city. The only thing that’s getting him any attention, however, is his ongoing battle with the Los Angeles District Attorney’s office to stay in his two elected offices.

But rather than send random tweets from the wee hours like our official Twitterer-in-Chief in the oval office, Mayor Robles sent me text messages airing out his grievances. When received his first text on Feb. 28 at 10:22 p.m., I couldn’t tell from whom it came. It read:

Many folks talk about supporting our Veterans, but few actually do like the City of Carson. Check this article out and you will see I am not wrong. comptonherald.org/carson-veterans-village

The link led to an announcement for the March 1 groundbreaking ceremony for Carson’s Veterans Village project.

Robles’ telephone number is actually in my phone’s contact list, but due to some minor formatting differences, his name did not come up with his number. So I ignored it.

Here is some  “fake news,” as not only have I not been removed from WRD (Water Replenishment District), but i am about to kick ass on April 17th, my new trial date.

But if you wanna read the judge’s report, and all the bad things the DA makes up about me, it’s in this link: 2urbangirls.com/judge-temporarily-removes-mayor-of-carson-from-water-board-seat

This time I knew who it was. Robles didn’t ask for our exchange to be off the record and I never assumed it was. Instead, I took the opportunity to get his thoughts on some of the most pressing issues facing the city of Carson and him. So for the next three days, from Saturday afternoon to Monday morning, we exchanged text messages about his fight with District Attorney Jackie Lacey and his efforts to get energy companies based in Carson to, as he has put it, “pay their fair share.”

The following is the result of our conversation via text message.

Random Lengths News (March 10, 2:43 p.m.): Just out of curiosity, since 2014 have you ever said that you were going to step down from WRD for any reason? And second, what are your thoughts about criticism that the city is engaged in too much litigation without a clear payoff for the city in the end?

Mayor Albert Robles (March 10, 4:01 p.m.): Too much litigation?  For too long the city has not stood up for the residents, and i am honored to lead that fight. Terelle, that is a complaint made by lyn jensen and other jim dear kool-aid supporters.

Robles (March 11, 2:25 p.m.): 1. For first time ever, carson stood up against the refineries and we got a $45 million settlement. Compare that to [the] past mayor who sold us out for a campaign contribution while [the] city just got more unmitigated pollution.

RLn (March 11, 4:17 p.m.): Back when the DA’s office began to come after you in earnest over holding overlapping offices, you accused the DAs office of racism ( first under Cooley then under lacey) particularly of how that office was going after elected Latinos of small cities in Southeast Los Angeles. Could you explain what you meant?

Robles (March 11, 6:21 p.m.) : It is a proven fact that Steve cooley was the most racist DA of our generation. And while we may have hoped that the racist persecutions would end upon the election of the current DA, it obviously did not.

In case anyone has been asleep and needs proof, consider that police officer killings of innocent Black and Brown citizens continue to go unprosecuted in the face of overwhelming evidence. Even when the police chief and investigation demands it.

She will pursue cases against Black and Brown elected officials for holding 2 offices but not against white elected officials and her explanation is “because no one complains about them.” Yes her office actually said this. She prosecuted Black (Sen. Wright) and Brown (councilman Alarcon) electeds for residency, but she hypocritically did not live in LA County when she ran for DA. WTF is right. She waste public money pursuing political vendettas but rape kits go untested? She is not the worst D.A. ever, only because Steve Cooley preceded her.

RLn (March 11, 8:56 p.m.): In regards to the CSU University Village, what is the ideal relationship between a college campus and the city and how is the current one between csudh and Carson different from that ideal?

Robles (March 12, 6:52 a.m.): The ideal relationship between CSUDH and its proposed massive development consisting of [1] almost 2000 market rate apartment (i.e., housing not exclusively for students or faculty), [2] about 100,000 square feet of retail (i.e., buildings in pursuit of profit not education) and [3, more than] 30 acres of commercial space (i.e., not educational facilities) with Carson should be the same as with any other major stakeholder and based on mutual respect. And this is the way it would be in any other city, but here in Carson residents have historically always gotten screwed. Maybe in the past Carson had no choice but to get screwed, for example like with the IKEA store not paying any sales taxes to the city for 20-years (yes, that was the deal and in case your readers do not know, cities’ main source of revenue is sales taxes). But, those times are gone, as Mayor I will not settle for anything less than fairness for Carson, just like what any other city would expect.

But here, inexplicably however, the relationship in regards to this massive development that is 100% within our city is based on one of bully and victim — CSUDH runs roughshod over us and demands Carson kowtow like a servant obediently.

Let me be clear, I want CSUDH to prosper and grow as an educational facility. In fact [this past] year they just completed their science building, the largest improvement to CSUDH in [more than] 20-years and not only did I support and welcome its construction, but the city did not do any to stand in its way — nothing.

But the new massive private retail/commercial development is different and out of fairness must be handled just like any other private development.

RLn (March 12, 7:07 a.m.): Does the rest of the council get what you’re trying to do or are there some with similar mindsets as the Carson chamber president whom you sparred with over the continuation of the utility users tax (I think).

Robles (March 12, 7:13 a.m.): Some councilmembers are hesitant and others just opposed to insisting Carson be treated fairly.

RLn (March 12, 7:13 a.m.): Do you believe you can coax the hesitant to form a majority in order to pass the measures needed to get Carson it’s due?