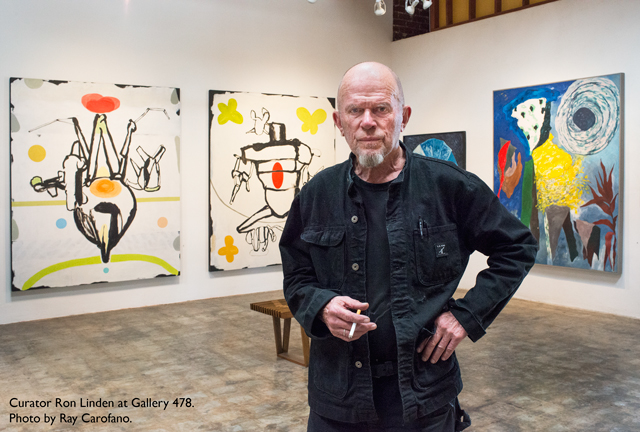 “As a curator, and as a teacher, I will never play down to an audience, because that’s not what you’re there for,” said Linden. “Give them something to chew on, both perceptually and intellectually. That’s what I try to do.”

As inspiration, Linden points to an essay by art historian, Benjamin H.D. Buchloh, in which he discusses the relevance of painting with the German visual artist Gerhard Richter. The conversation brings an intellectual and a world-renowned artist to a discussion on the contradictions in art.

“It’s the contradiction of knowing full well that the means you are using won’t achieve what you aim for, and at the same time not being prepared to change those means,” Buchloh explained.

“That’s not a contradiction, it’s a perfectly normal state of affairs, the normal mess if you like,” replied Richter.

Richter concludes that all means are adequate, “The question is, what are my means? And what can I achieve with them?” Linden’s goal is to illustrate the means: painting.

RLn: Does painting remain relevant in today’s world of abstraction and conceptual installations?

Ron Linden: Painting has never really gone away. In the ‘70s, Les Levine, a conceptual artist declared painting dead, but it wasn’t so. Painting reinvents itself continuously. The British sculptor Anthony Caro once said, “We’re all Paleolithic, we all smear stuff, or we’re Neolithic, we pile stones on top of each other.”

So the idea of this show is smearing around that greasy substance that Caro talks about with Paleolithic man. I thought that this is the perfect time to show off this medium for its variety. So, you have everything from the casual, almost de-skilled look of HK Zamani to Bill Mahan, whose work is traditionally crafted and the physicality is undeniable. Bill’s work references the whole history of painting as far as I am concerned. At the same time, Jay McCafferty’s delicate solar burn is completely different from Ted Twine, whose work is completely different than Bill’s. That was the idea. Any place you look in this gallery there’s something different going on, but it’s all going on with paint.

RLn: Through your many years of curating in the Harbor Area, do you find it difficult to draw an audience to this part of Los Angeles?

RL: People come from Venice, Santa Monica, downtown LA, Pasadena, etc. Ray Carofano has been running this gallery for 30 years and I have been curating here for more than 20 years. The opening of this exhibit was the most highly attended reception we have had. It is a wrong perception that people won’t come to San Pedro. We have been attracting people from outside of town for a long time. Many of the artists in this exhibit have shown across the United States, Europe and Asia. These are all recognized artists, and I think you have to have a quality offering if you expect to become a cultural destination.

RLn: A few of your own minimalist pieces are included in this show. Can you explain your minimalist style for visitors to this exhibit?

RL: Some people paint with emotions and feelings. My painting stems more from thoughts than emotions. I try to manifest that in a way that you can get a sense of my intentions. The paintings are not unfeeling, but that is not the engine that drives it. Often I am more inspired by what I read than what I see. I try to avoid styles or trends.

Hours: 11a.m. to 6 p.m. Monday through Friday and by appointment