With films such as Afuera and Free CeCe!, this year’s QFilm Festival at the Art Theatre in Long Beach is pertinent, thrilling and entertaining, exploring the variety of LGBTQ life on screen.

Some of the films tackle topics that hit on the major socio-political headlines of today. Afuera and Free CeCe! focus on the struggles of transgender people in everyday American life.

While the United States has come a long way toward equality for the LGBTQ population, issues still arise in a world socialized to remain close-minded and hate-filled for that which they cannot understand. The struggles of trans people, in particular, extend beyond  the trans-friendly bathrooms that have stirred so much debate.

Afuera, directed by Steven Liang and written by Steven Canals, shows us how combining immigration status with the boundaries of life that trans people face  adds to an already complex struggle.

With an American flag waving in the background, the short tells the story of an undocumented trans woman, who, needing to support herself, resorts to the sex trade.

Another film that sheds light on the lives of trans people at this year’s QFilm Festival is the documentary, Free CeCe! 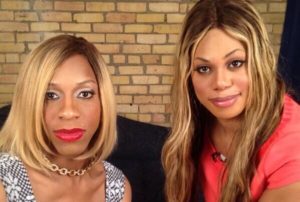 Documentarian Jacqueline Gares focused on the story of Chrishaun McDonald, a trans woman who was brutally attacked on a walk home with friends. The story takes its turn because CeCe, as McDonald is called, defended herself from her aggressor and her attacker was killed.

This film, executive produced by Laverne Cox, is the story of a woman who persevered with a community behind her. The story brings to light the discriminatory nature of the American  justice system, especially against trans people of color.

Gares, while focusing on CeCe’s story, puts this situation into the light of a movement. CeCe’s arrest led the fight for rights of transgender people.

The nature of the prison industrial system is revealed by CeCe’s treatment from her arrest until  the day she was out of prison. CeCe was interrogated intensively, put into solitary confinement and sent to a men’s prison. All of these are psychologically damaging. The racist and sexist tones of the American prison and justice systems are shown throughout the film.

The film festival will also show an edge of drama and thrills this year. Women Who Kill and Kiss Me, Kill Me, which are both screen Sept. 9, are two films that stand out.

Kiss Me, Kill Me is reminiscent of noir in its sound and script. It tells the tale of a gay man, Dusty,  who is the prime suspect in the murder of his boyfriend.

To figure out who killed his boyfriend, Dusty tries to connect dots but also feels the pressure that it may have been him and this haunts him.

Unlike Kiss Me, Kill Me, Women Who Kill  provides a very droning tone with hints at dry humor here and there.

A story of two ex-lovers, we find that Morgan and Jean have personalities that make them horribly perfect for each other.

While Morgan and Jean continue their true crime podcast on female murderers, Morgan meets a woman at her food co-op and the story takes off.

Morgan, a very private woman, falls in love with Simone, a woman she meets at work. All seems to go well until Jean uncovers that Simone may not be who they think she is.

With very simple, yet thrilling discoveries, this film shows how love can make you blind and drive you to places you never thought you might go.

Check out the full schedule of films and shorts showing at this year’s QFilm festival at http://qfilmslongbeach.com.