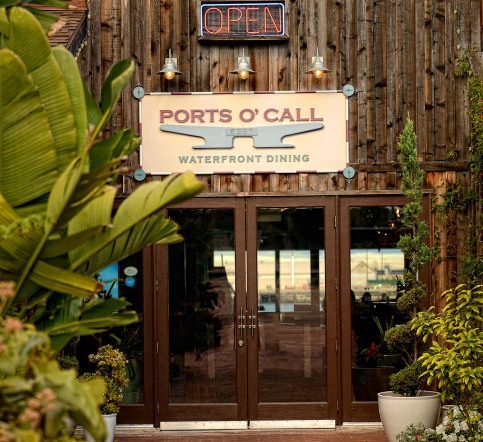 Ports O’ Call has been an iconic waterfront dining destination for generations. Since its inception, families from all over Southern California have been coming to San Pedro to dine. While the façade seems to lack luster, hope for the future of the waterfront is bright.

Phase One of development has all but been approved for several berths north of the classic Ports O’ Call Restaurant. The dining scene will be changing.

The restaurant business is fickle at best. Consumers and diners are constantly looking for the next best eatery, but San Pedro — perhaps more than any other area in Los Angeles County — holds fast to tradition and appreciates local, family-owned businesses more than almost anywhere. It’s only appropriate that we take care of our community treasures, and not let them depreciate into dilapidated buildings and storefronts.

I recently spent several hours wandering around Ports O’ Call trying to picture what changes might bring to the businesses at the waterfront and had the pleasure of dining at one of San Pedro’s oldest dining establishments, Ports O’ Call Restaurant — which has been in the same location for more than 55 years. I was able to chat at length with Noramae Munster, the culinary director for the restaurant. She was able to provide some wonderful insight about the upcoming changes to the area.

Munster, who was originally brought on as a consultant 10 years ago, fell in love with the waterfront and has been with the restaurant since. While the restaurant has seen its ups and downs, she maintains a positive disposition. She assured me that they are at the top of their game — and she’s correct. Reviews and ratings for the restaurant are higher than ever and the feedback from patrons is positive.

Currently, the brand of the waterfront seems to project one that is old, broken and undesirable. What most don’t realize is that the waterfront is actually quite successful in its own right, despite having a less-than-glamorous exterior appearance. Ports O’ Call Restaurant did more than $5 million in sales this past year.  And the San Pedro Fish Market just down the way? It reportedly made about $15 million in revenue. That’s nothing to scoff at.

Munster believes the development of the waterfront couldn’t have come at a better time. Not only is it greatly appreciated but it’s been a long time coming. While the immediate development and construction doesn’t directly affect the Ports O’ Call Restaurant property, she looks forward to seeing the other areas develop. She believes it will help paint an accurate depiction of what to expect moving forward.

Gina Ruccione has traveled all over Europe and Asia and has lived in almost every nook of Los Angeles County. She also is a member of the Southern California Restaurant Writers Association. You can visit her website at www.foodfashionfoolishfornication.com.