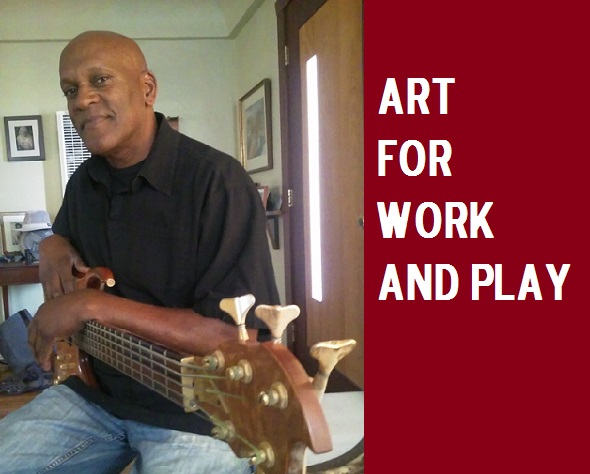 Harold Greene’s talents expand beyond creating one-of-a-kind furniture, for which he has been featured over the years in Random Lengths News. Greene also builds and creates music.

“Unlike furniture making, which is an art that takes a lot of pre-planning, careful technique and execution of a piece of furniture—sometimes over a long period of time—music is performed in the moment,” Greene said. “That’s what I like about it. It’s different than what I normally do. There is room for improvisation and spontaneity.”

Greene is part of a duo called Switch Off. He plays the cajon, backing Freddie Schreuders on guitar.

Switch Off has been performing at Sirens in San Pedro for just over a month. The duo’s funky, head bopping grooves and easy vibe, coupled with Sirens whimsical mermaid theme, will set your weekend right. Energetic? Absolutely. You feel Switch Off. It’s a groove thing. The duo brings its own creative touch, adding surprising beats and rhythms to classic rock songs and some rhythm and blues.

Greene met Schreuders this past year. The guitarist was helping Greene with a big project for the Port of Los Angeles.

“I had instruments down there in Warehouse 57,” Greene said. “It’s an unbelievable warehouse, 50,000 square feet and the acoustics are like the Sistine Chapel. Freddie heard me playing the cajon there, so just recently he asked me to back him up. He can throw out any beat, Latin, reggae or bossa nova and I can just play it because I know all the beats and rhythms and how they interact.”

Greene said their show is paired down. Sometimes he has just a cajon, a cymbal or shakers, but it’s energetic. Both players have such a deep level of skill and intuitiveness that as they play, the music inhabits you.

Greene describes his part in this duo.

“When I listen to music I really listen to drums and bass and how the player attacks the drums,” Greene said. “There’s a big difference between a digital drum track and an actual live drummer. You can almost feel the drummer breathe and you can feel that each hit is different than the last, so that’s what I try to emulate when I play the cajon.”

Performing is a time of play for this artist, who works 50-plus hours weekly at his furniture craft. But Greene takes music seriously and speaks attentively about structure and sound. He should, because a few decades ago Greene was a member of the band Magnum with one of his brothers and six other players. They produced a successful, highly collectible album titled Fully Loaded.

“It was a really big group with a really big sound,” Greene said. “A few years ago I saw the album go in Europe for the equivalent of $800 (U.S.). I even still hear some of its tracks played on the radio.”

Greene said his recent pairing with Schreuders is different for him because he’s never backed a guitar player with percussion. But he always experimented with different percussion instruments going all the way back to his Magnum days.

“Freddie is a drummer as well, so he will switch to percussion and I will play guitar, bass or Chapman Stick, or, through the magic of modern electronics, all three at the same time through a loop pedal” Greene said. “Since we are switching roles our group is called Switch Off.

Growing up in musical family, percussion instruments were around his house. One of six children, all took classical piano lessons plus at least one more instrument. Reared in a small house, they somehow fit a baby grand piano in the living room.

At 15, Greene’s mother brought home a guitar she intended to learn. He picked it up, liked its sound and began learning.

He switched from guitar to fretless bass when Magnum formed because there were no bass players around.

In the early 2000s Greene also took percussion ensemble class at Los Angeles Harbor College. He said it was an almost academic approach to percussion.

“We had to read charts and learn parts on lots of different percussion instruments,” Greene said. “That was a challenge. We learned African, Latin, Indian percussion – or at least the spoken rhythms of Indian music. Percussion included marimbas, xylophone, all of the struck toned instruments and orchestra bells. I also sometimes filled in on electric bass.”

Greene made his cajon from wood scraps in his shop. The inside is strung with guitar strings to get that snare sound. He is a long time player of the Chapman Stick, a 10-or-12 string instrument, designed by Emmet Chapman, which is played by tapping. It has five treble and five bass strings and a six octave range. Greene learned to play the stick on his own, wanting to develop his own musical style on it.

“It’s great because you can play it like a piano,” Greene said. “You can play the bass lines and cords with your left hand and chords and melodies with your right hand. It’s more similar to piano than it is to guitar or bass. It goes much deeper than a normal bass.”

Greene will soon bring his Chapman Stick, electric bass and a guitar to Sirens so they will have a full rig to perform with.

Greene said he has not had to think commercially with music.

But when there is money, it’s nice. He stressed one thing he does not do is play for free. That would undercut musicians who do play for a living.

“If you give music away for free it’s less likely someone will hire a musician and pay them,” Greene said. “It’s hard for bands to make a name for themselves.”

Switch Off performs at Sirens, from 6 to 8 p.m. on Friday or Saturday. You can walk in and grab a great cup of coffee or tea and relax immediately upon hearing this duo’s groove.