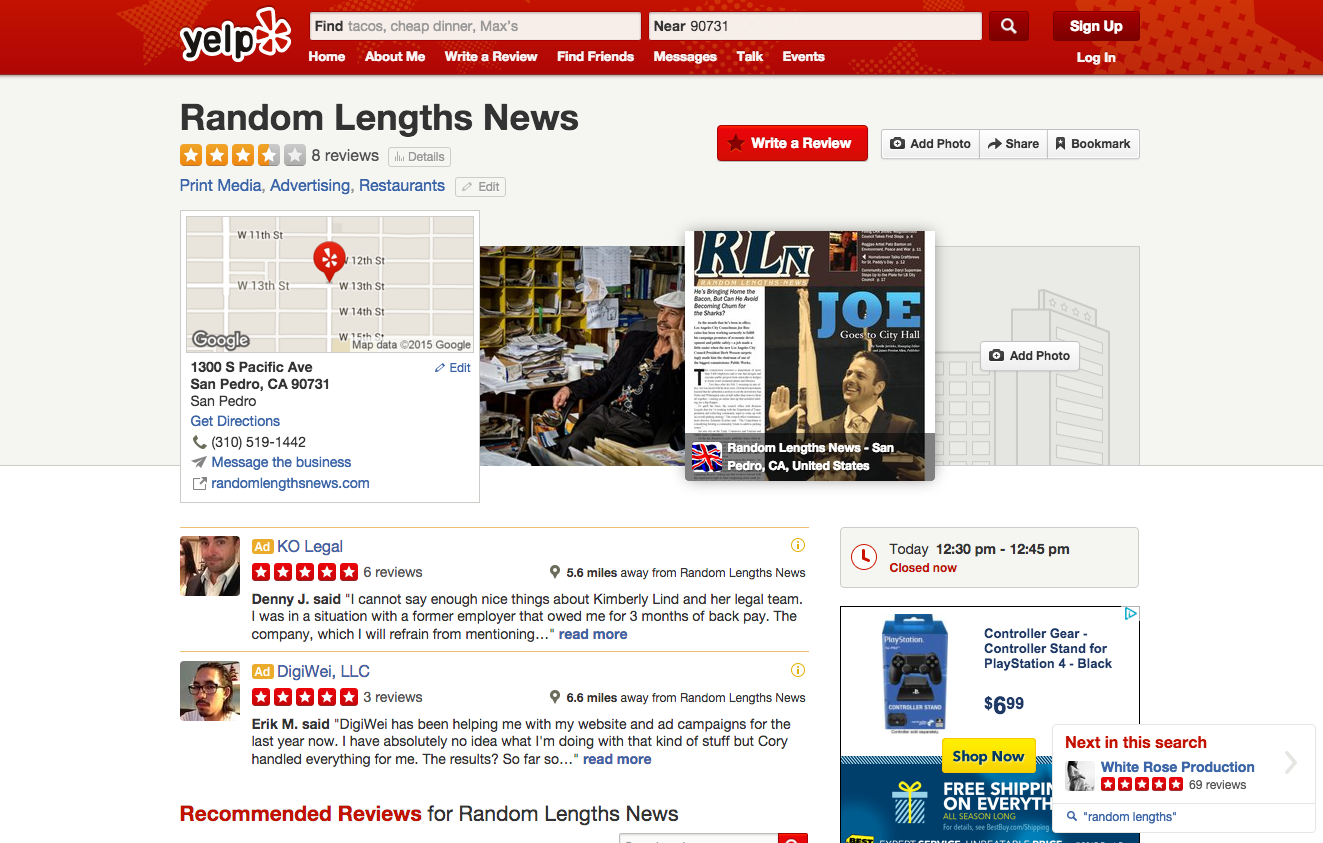 I am a cuisine and restaurant writer. That is my job and I take it seriously. But with the endless holiday parties and pop-up dinners awaiting, I thought I would give my waistline a break and do a little bit of light reading.

So, I did the unthinkable. I started scrolling through Yelp reviews to see what others think of some of my favorite restaurants around town.

Anyone who has ever been within earshot and lucky enough to catch one of my famous Yelp rants knows that I’m not very fond of Yelp reviews. I rarely find them helpful. I might look at the overall rating, but I never read through reviews.

I am gluttonous at times (it comes with the job title) but I’m hardly a glutton for punishment. So, why on Earth would I subject myself to the most brutal form of self-flagellation and read through hours of some of the worst reviews of all time? I really don’t know.

It was shocking to read the asinine comments from some patrons. Sure, some were benign, but many were rather upsetting. Not only were most of the complaints completely unfounded, some were even aggressive. After enduring what seemed to be an endless barrage of nonsense, my honest conclusion is that we are dealing with a serious ignorance epidemic.

The purpose of this article is to enlighten some of the self–proclaimed food critics out there who feel compelled to impart their opinions on others. I will gladly read your reviews and then do some critiquing of my own.

So, you want to write a negative restaurant Yelp review? Consider that you eat at a restaurant– — and I’m not talking about some chain restaurant, but one where the chef is trying to express himself in a creative way—–perhaps you should be a bit more open-

minded. They are called the culinary arts for a reason.

options, just as I wouldn’t walk into a vegan restaurant and go off because I couldn’t order a filet mignon. You are simply not in a position to complain about something like

Food cold? Absolutely horrible service? A cockroach in your salad? OK, fine. Maybe then I give you permission to hammer away. But just because you don’t like cilantro in a

dish doesn’t mean the restaurant is bad. That is the equivalent of walking into a museum, seeing a painting you don’t like and then giving the museum a shit rating. Granted, tastes and preferences vary from person to person, but an eating establishment never warrants a bad review because you seem to think Maldon salt is synonymous with “big ass chunks of salt.”

Karl Marx said, “Ignorance is bliss,” but let me tell you — not when you’re writing a review. At that point you are a nightmare to chefs and just about anyone who has ever worked in the food service industry.

At the very least, a critic comes from a place of knowledge. What allows me to critique food is what I know about food. And I don’t claim to know everything. The day I stop learning is the day that I stop asking questions — and that day will never come.

I don’t critique beer, because I don’t know enough about it. Have I had beer that I didn’t enjoy? Yes, but I didn’t write off the beverage all together. I realized I had ordered incorrectly– due to my lack of knowledge. And I came away knowing I don’t particular like chocolate stout. I won’t order it again, but I certainly won’t gripe about it.

So, if you wish to share your opinion with others please consider your audience and your purpose. Who are you trying to connect with? Is your purpose to inform? Or, maybe you are trying to entertain? But if you just want to be a dick and stand on a soapbox spewing nothings, you’re not helping anyone. Come from a place of humility and knowledge and you’re likely to be better received — especially from those serving your food.

And, with that, I say, “Happy Holidays”— but more importantly play nice on Yelp.

Gina Ruccione has traveled all over Europe and Asia and has lived in almost every nook of Los Angeles County. You can visit her website at www.foodfashionfoolishfornication.com.