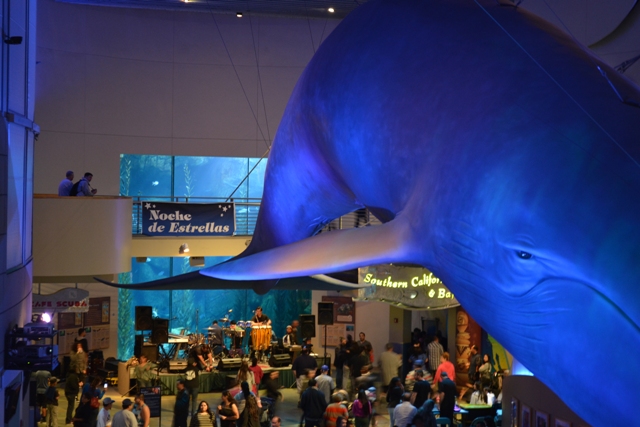 Aztec dancers greeted an audience of about 200 people — mostly Latino families — March 14, at the annual Noche de Estrellas (Night of Stars inSpanish) that the Aquarium of the Pacific in Long Beach organizes.

Noche de Estrellas is a bilingual (English and Spanish) evening filled with environmental educational opportunities for all ages, Latino music bands, disc jockeys, arts and crafts, food and drinks, and the experience of visiting the Aquarium and its animals at night. This event began in 2010. Its first award recipient was actor and activist Edward James Olmos.

“Homeboys Industries does so much for so many and they’ve done it for so long that I believe it’s always a good time to honor them,” said Dr. Martha Molina Bernadett, an Aquarium of the Pacific trustee. “This is an especially important time as Latinos are such an important fabric of Southern California and Father Boyle’s work is so lasting.”

Erin Echavarria is a prime example of the impact of the organization. The 28-year-old met Boyle at the age of 16 and had been going in and out of jail.

“It was the only thing I knew,” Echavarria said. “I was more afraid that I was going to fail doing good. And, I didn’t have no family. My family was my neighborhood…. Until I finally understood that that lifestyle was all bad; nothing good comes from it.”

Echavarria sees a big change in life since deciding to take full advantages of the services that Homeboy Industries offers.

“Life is just good now,” Echavarria said. “I feel good in my ’hood and I feel good at Homeboys, but I can’t have both. So, I’d rather be at Homeboys. I get all the love and support I need right there.”

Jose Osuna, director of employment services at Homeboy Industries, received the award on behalf of the organization.

“To be recognized by an institution like the Aquarium of the Pacific is a big honor and it kind of lightens our hearts and re-motivates us to keep doing the work that we are doing,” Osuna said.

Osuna was a gang member for about 25 years of his life. Unfortunately, he was never able to find any support services in Long Beach, so he ended up going to Homeboy Industries for help.

Though he spent 13 years of his life in prison, he has been prison-free for more than five years. The organization also helped him with his substance abuse issues, being off of drugs for six years. For Osuna, the catalyst that pushed him to get help was after his 17-year-old son was murdered in Long Beach.

“So, I’m grateful that Father Boyle, 25 years ago, decided to start a program that would help out men and women like myself,” Osuna said.

While finding help in the city was hard for Osuna, he said there are indications that things might be changing. Centro CHA, a Long Beach nonprofit that’s worked with underrepresented, low-income families in the city since 1992, has been consulting with Homeboy Industries in trying to build a similar model.

However, an extension of Homeboy Industries in Long Beach is unlikely.

“The truth is that Father Boyle doesn’t feel that it would work that way,” he said. “He really wants something to be grassroots, to come from the community where it is needed. So, that’s why we try to help out other agencies that already exist in the community.”

He said that what might make an impact is looking at the issue from a therapeutic point of view. Dealing with the inner issues that cause people to join gangs in the first place is important — the core problem.

Beyond funding, addressing the issue of gang problems in the city also would take the support of city leadership. Osuna envisions city representatives working in conjunction with law enforcement, taking a therapeutic approach before taking an incarceration approach. He believes city representatives should look at different approaches, which consider how to heal the community by bringing more services to low-income communities and healthier activities. Very often, the mode of law enforcement is the first mode of approach that is considered. The gang problem is only a symptom of a sick community that lacks opportunities such employment and lack of health care, which plague the Latino community, he said.

“That needs to happen here and I think that we are on the way to doing that here,” he said. “If the right things happen and the right decisions get made by city government, I think that we’ll start to curve the gang problem here in Long Beach the way that it has in LA [where the murder rates have dropped].”