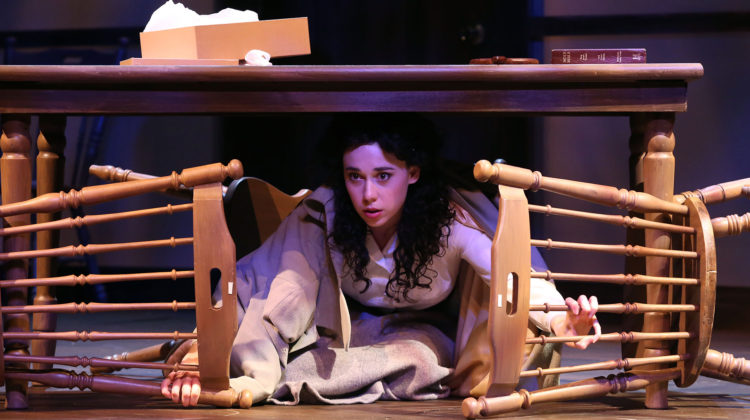 Can we ever fill the holes in our souls made by the murders of loved ones? That is the question at the center of Beast on the Moon, the story of two orphans of the Armenian genocide (yes, genocide ― never mind our government’s continued failure to recognize it as such) trying to make new lives in the Land of the Free.

Unfortunately, playwright Richard Kalinoski doesn’t manage to make much of a story out of their struggle, and the emotional resonance he seeks is never really earned. Nonetheless, a couple of nice performances make this International City Theatre production watchable, if uneventful.

Since arriving in the United States, young Aram Tomasian (Travis Leland) has made a go of it as a photographer. What he needs now is family ― his parents and siblings were slaughtered by the Turks while he cowered in a crawlspace under the floorboards ― so he’s sent away for a “picture bride,” a girl selected from an orphanage on the basis of a photograph. She is Seta (Rachel Weck), all of 14 when she joins him in Milwaukee as his lawfully wedded wife. Despite her tender age, he cannot wait to start their procreation, a neurotic attempt to fill the genocide-induced gaps in the foliage of his family tree.

Were he brutal and hard-hearted, Aram might come off as something of a villain (although mores regarding sexual relations were quite different a century ago, and all of us are shaped by culture, so…), but he hears Seta when she speaks of a Turkish’s soldier’s rape of her sister in her place, of how her mother was crucified (literally), of seeing the decapitated heads of her family members hanging on a clothesline.

It’s the performances of Leland and Weck that keep us interested. In Leland’s hands Aram’s single-minded stolidity never feels heartless ― it’s a defense mechanism of a man in pain ― while Weck effectively portrays Seta’s transformation from a quiet, scared, traumatized adolescent to a capable young woman of quiet confidence. And we fully believe their relationship, which by the end of the play has grown into a genuine partnership.

Problem is, there isn’t much to that journey. By intermission all that’s transpired since Seta’s arrival is the couple’s failure to generate offspring (despite more effort than Seta would like), and we’re wondering whether something will finally happen in Act 2. But not much does. Yes, Seta comes to the aid of a street urchin (Nico Ridino), which ultimately catalyzes the couple’s growth, but this feels like a plot device of a writer who knows he wants to tell a post-Armenian genocide story through a couple of clearly drawn characters but doesn’t really know what to do with them.

Director caryn desai does a solid job with the material she’s chosen (even if Ridino plays his character with an execrable Italian accent and all the subtlety of Edward G. Robinson), pacing the action perfectly; it’s just that there’s not much you can do with this material.

But resonance is in the heart of the beholder. By chance I ran into a friend at this show. Having never seen him at a play, I asked whether he is a regular theatregoer. “No,” he said, “[but] I’m Armenian.” And he was greatly moved.

Perhaps that’s what this play needs: an audience that can project their personal experience onto the stage. But for me Beast on the Moon falls into the crowded category of works which rely on our identification with real-life tragedy rather than earning empathy solely through what’s on the page and stage.

Beast on the Moon at International City Theatre