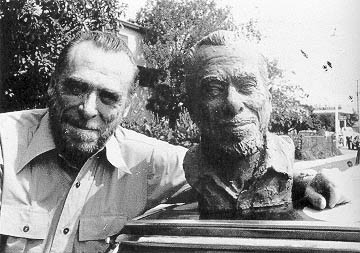 At one point in the early 1990s, this newspaper hosted the famous Nation magazine columnist Alex Cockburn to speak at Los Angeles Harbor College. I took him for a tour of San Pedro and drove him over the Vincent Thomas Bridge. His reaction to seeing the industrial expanse of the two harbors loaded with containers and imported cars was, “So here’s the national trade deficit!”

Later on that evening, I brought him to dinner at Senfuku, the local sushi bar and there, perched at the end of the bar, was none other than the noted poet, Charles Bukowski, drinking a tall Sapporo beer and eating sushi. I thought to myself, “Isn’t this just too serendipitous to have two great minds in the same place?”

So I invited Buk to come and join us, and after some stalling, he brought his beer over and sat down. I was very curious about what these men would talk about, so I simply introduced them and waited. They didn’t end up talking about writing, books and authors or even politics, but cats!  “Cats?” I thought. “How weird is this?”

It shouldn’t have surprised me really as most writers have cats for some reason, Hemmingway was notorious for his cats in Cuba and e.e. cummings went so far as to write about them extensively, but I’m a bit off topic.

A week ago Friday some well-meaning folks were celebrating Bukowski’s 99th birthday at Sacred Grounds and latching on to an idea that’s been floating around to create a bronze statue of the late poet who adopted San Pedro and fled Los Angeles. Now, it’s a great idea to honor and recognize our best artists, writers and musicians and we should have a place for this in our arts district, but this poet shouldn’t be sanitized for tourist consumption. You gotta keep it real!

If you don’t know anything about Charles Bukowski and have never read anything by him, why would you want to place a bronze statue to him in the San Pedro Town Square?  I challenge all of these local boosters down at City Hall or the Chamber of Commerce to actually read some of his books first and then put him into the cultural context of this town before you place him on a pedestal.  And, while the rest of you are scratching your chins on this topic, consider this list of other notable writers and musicians connected to San Pedro before you start searching to draw in those elusive tourist dollars from Germany.

I would bet that the majority of the San Pedro Chamber of Commerce has never heard of half of these artists nor read or listened to their work. And, this doesn’t take into account the many visual artists dead or living, actors and screenwriters or filmmakers that came from or lived here.  Nor does this list document writers, musicians and others who are still at work in the cultural salt mines in this unrecognized colony of the Los Angeles empire.

For most of its history, this harbor has been more recognized for smuggling than regular business. What do you suppose Richard Henry Dana Jr.’s ship was doing trading cow hides off the coast of California or why a certain part of town is still called Whiskey Flats, except for the prevalence of smuggling during the Prohibition era? Probably not something the civic leaders want to promote at this point as a significant amount of this illicit activity still goes on under the radar at the port.

However, for more public consumption what about one grand mural on a prominent wall greeting the public from afar that has all of the above artists and many of the others (like author James Krusoe and dancer Misty Copeland, who haven’t made it on to Wikipedia’s Who’s-Who of San Pedro) that I apologize for having left off here?  Now that would make a much bigger statement than all the brass on the USS Iowa and would give this town something more to reflect upon other than our dependence upon and the dominance of the U.S. trade deficit, the loss of the U.S. Navy after World War II and the decline of the once prosperous fishing industry.

A bronze statue of Bukowski is fine, just don’t sanitize him for tourist consumption. And, know something about him before you put him on your tourist brochure. But don’t stop there. This place has so much more cultural legacy than civic leaders understand, or that the people who grew up or end up here recognize. This needs to be brought down from the attics, celebrated, taught in our schools and put into context before it is erased by waterfront gentrification and the never-ending boosterism that is making this town look like every place else. Just keep it real and authentic.