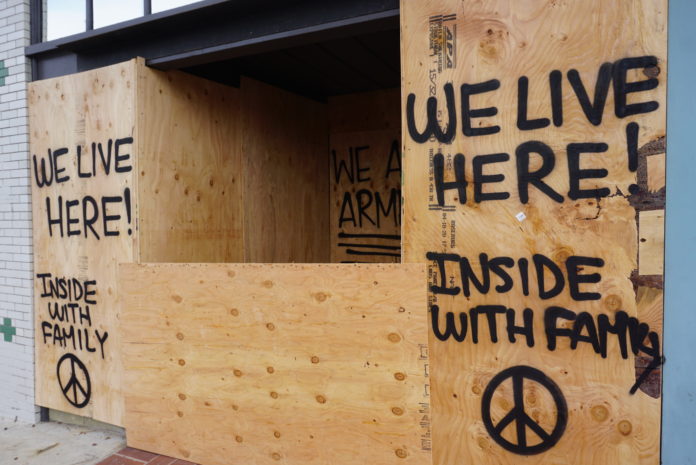 Dr. Cheyenne Bryant, the president of the San Pedro/Wilmington Chapter of the NAACP, will lead a Unity March on June 6 with the support of Harbor Division LAPD and Councilman Joe Buscaino. Random Lengths News heard from organizers that  Rep. Nanette Barragan will participate.

The march is intended to express solidarity with the reaction to the police-caused death of George Floyd in Minnesota and the resulting charges. But it’s mostly about displaying community solidarity in the face of division elsewhere in the country. The march is to start at Harbor Division LAPD headquarters at 10 a.m. and end at the City Hall Building in San Pedro on 7th and Harbor Blvd.

All invited Car and Motorcycle Clubs will arrive at the LAPD Harbor Division Station and park on  the southbound side of John S. Gibson between 8 a.m. – 9 a.m.

March participants will arrive at the station between 9 a.m. and 9:45 a.m. Organizers note that there will be no public parking at the station and recommends that all participants park at the park and ride at West Channel Street on North Gaffey Street, San Pedro or use a ride service to dropped off at the station.

Previously, there have been two small demonstrations for justice at LAPD Harbor Division and a couple of smaller ones at Pepper Tree Plaza outside of San Pedro City Hall, the turnout of  which contrasted in size to the much larger spontaneous demonstrations of thousands protesting in downtown Los Angeles, Beverly Hills, Santa Moncia and Long Beach.

While the media has mostly focused on the looters and property damage in those areas by a small number of people taking advantage of the protests, here in San Pedro, there has been no such vandalism, nor is much vandalism from protests expected. Yet many of the merchants and landlords, stoked by national television coverage and social media have boarded up storefronts with plywood with spray-painted solidarity messages expressing support for Black Lives Matter on them.

There is a palpable air of anxiety and fear amongst business owners and others, resulting in a spontaneous rising of local residents coming together this week to “protect storefronts from outsiders” who never showed up. Most of these unfounded fears have been stoked by social media posts from people or groups wishing to cause disruption and chaos during this time of national outrage.

In response the LAPD Harbor Division has deployed multiple teams of officers to walk foot patrols in the business district which has been something that the community has lobbied for over the past three decades and has only been executed occasionally.

The results on this Unity March may end up having various degrees of success but one thing is almost certain, there will be a lot of used plywood available after this latest crisis passes.