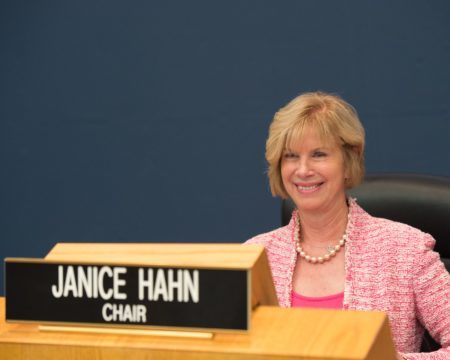 LOS ANGELES – Rabbi Cassi Cail, the first female Rabbi of Temple Beth El in San Pedro, Nov. 12, delivered the invocation for the Board of Supervisors’ weekly meeting under the invitation of County Supervisor and Chair Janice Hahn.

“What sacred work is done each week in serving the community, in living up to the kind of legacy set by our veterans, by so many, who do everything that they can in order to serve our great County,” said Rabbi Cail in delivering the invocation. “God of justice and mercy, of compassion and love, may you fill all of us with the patience to listen to our brothers and sisters and truly hear them. May you give us the wisdom to use our words wisely, to fill our hearts with justice and compassion as we try to serve the needs of a wonderfully-diverse County.”

Supervisor Hahn said Rabbi Cail is passionate about her work and social justice. At San Pedro’s Temple Beth El, she continues to honor the legacy of bringing communities together around important issues in Los Angeles.

Rabbi Cail was ordained in in 2011 from the Hebrew Union College-Jewish Institute of Religion, where she also received a Master’s in Jewish Literature. Prior to serving as Temple Beth El’s first female Rabbi, she worked as a congregational Rabbi for Temple Emanu-El of Utica, NY and then Temple Or Elohim in Jericho, NY. While in Seminary, she co-founded a group called The Wandering Jews of Astoria, serving unaffiliated Jews in their 20s and 30s. She now lives in San Pedro with her husband and two children

The lawsuit alleges that JUUL violated California law by:

Failing to include required warnings about exposure to chemicals linked to cancer, birth defects, or other reproductive harm; Delivering tobacco products directly to underage persons; Delivering tobacco products directly to consumers without properly verifying their age; Violating the privacy rights of minors by sending marketing material to the email addresses of underage individuals who failed age verification on JUUL’s website; Creating a public health epidemic, particularly among young people, with an addictive and harmful product. This epidemic has had serious negative effects on public schools across the state.

As of November 13, the CDC reported 42 deaths in patients with e-cigarette or vaping product use, with a further 2,172 cases of associated lung injury reported nationwide. Four of the deaths reported were patients in California.

In September, the Board approved a landmark ban on the sale of flavored tobacco products in unincorporated areas of the County and subsequently launched a targeted public health campaign to educate young people on the dangers of vaping.

County to Intervene in Board and Care Closures

Adult Residential Facilities and Residential Care Facilities for the Elderly, commonly referred to as “Board and Cares” are vital housing resources for many LA County residents with mental illnesses and other health needs. Board and Cares provide these individuals with a stable home, meals, and various other supportive services.

These facilities have been closing at a rapid rate due to increasing costs and stagnant reimbursement rates from the State. Since 2016, thirty-nine Board and Cares serving 949 individuals were forced to close their doors, leaving their vulnerable residents scrambling to avoid homelessness.  Many more facilities are at risk of closing.

Supervisor Janice Hahn said these board and care facilities are often the only thing standing between their residents and homelessness. The state needs to start reimbursing these facilities for the actual cost of the care they provide. But until that happens, the county is going to step up and give these facilities the support they need to keep their doors open so they can continue to be homes for our most vulnerable residents.

A two-year long process brought together Board and Care owners and clients to discuss their needs. The resulting motion directs the Department of Mental Health, Department of Health Services, and the Chief Executive Office to identify funding for both operations and capital improvements to preserve and expand existing Board and Care facilities.

Remarkably, exactly one year ago in San Pedro, 140 residents of Harbor View House, the longtime mental healthcare residence had been given one week to move out by a Nov. 21 deadline when the center was to be closed and ostensibly redeveloped into apartments in relation to the new Waterfront plans.