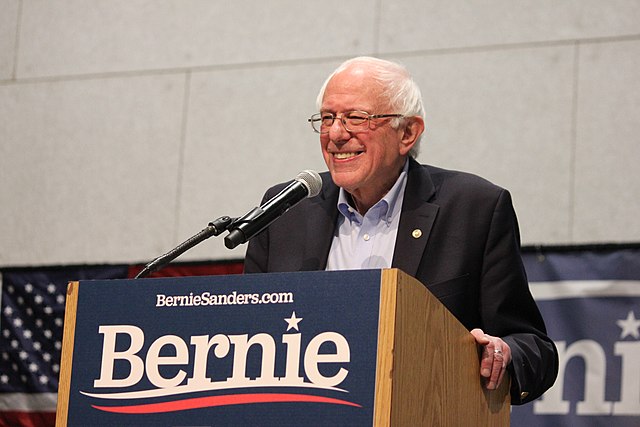 There is No “Middle Ground” Compromise with Trump

Let me thank the California Democratic Party for helping to make this state one of the great progressive forces in America. And, let me thank all of you who supported my 2016 campaign for president.

Together we began a political revolution whose ideas and energy have not only transformed the Democratic Party but have transformed politics in America.

And today we take that revolution forward.

And let me thank everybody in this room for your determination to defeat the worst president in the history of this country — a president who is a racist, a sexist, a homophobe and a religious bigot.

All of us are united in defeating Trump, but let me be frank with you and raise the issue that I think is on everyone’s mind, and that is: what is the best way to defeat Trump?

As you all know, there is a debate among presidential candidates who have spoken to you here in this room, and those who have chosen for whatever reason not to be in this room about the best way forward.

So let me be as clear as I can be: in my view, we will not defeat Donald Trump unless we bring excitement and energy into the campaign, and unless we give millions of working people and young people a reason to vote, and a reason to believe that politics is relevant to their lives.

We cannot go back to the old ways, we have got to go forward with a new and progressive agenda.

We have got to stand up and make it clear that we believe in a government and an economy and an energy system that represents all of us, not just the one percent.

We have got to make it clear that when the future of the planet is at stake, there is no “middle ground.” We will take on the fossil fuel industry and transform our energy system.

We have got to make it clear that when this country drifts toward oligarchy, there is no “middle ground.” Large profitable corporations like Amazon will pay their fair share of taxes.

When it comes to health care, there is no “middle ground.” Health care is a human right, not a privilege and we will guarantee health care to all of our people through a Medicare for All single-payer system.

When it comes to abortion, there is no “middle ground.” A woman has the right to control her own life, not the government.

And when it comes to mass shootings and the fact that 40,000 people were killed last year with guns, no “middle ground.” We will take on the NRA.

And when it comes to criminal justice reform and immigration reform, no “middle ground.” We will take on the prison-industrial complex. We will take on racism at the border.

And when it comes to foreign policy, no “middle ground.” We will finally put an end to a bloated military budget and end endless wars.

Brothers and sisters at this momentous moment in American history, we have got to be thinking not just about ourselves but about future generations, let us go forward together.