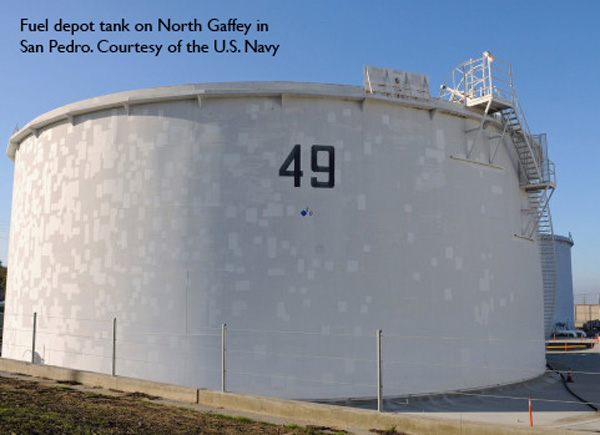 That’s the bottom-line message that the Northwest San Pedro Neighborhood Council has sent to Navy about plans to reactivate its fuel depot via a commercial lease.

The public comment period was extended through June 3, but government entities, such as neighborhood councils, were given additional time to respond, which Northwest did in a comment letter approved by its board at the June 10 meeting. It was drafted as a result of two meetings of the Community Issues Committee.

“We find alternate A, which involves the probable building of above ground tanks on the North Gaffey St. site to be completely unacceptable,” CIC Chair Don Dixon told Random Lengths News.

“It’s not acceptable to us from an environmental standpoint, from an aesthetic standpoint, from a public safety standpoint, all sorts of standpoints which to us are very important. For us to be above-ground tanks are nonstarter,” he said. They were drawing on around 100 comments received from community members.

Common community concerns mentioned include the location of unspecified new development in an earthquake rupture and liquefaction zone, accentuating the dangers from two adjacent facilities — Rancho LPG and Phillips Refinery — and endangering nearby homes and schools, the increased threat of a terrorist attack, and the needless added danger of tanker truck traffic to move fuel.

Navy Public Affairs Officer Gregg Smith spoke at the June 29  Community Issues Committee meeting to explain the Navy’s rationale—the Pacific Fleet is expanding and the Navy’s goal is to have fueling facility outside of San Diego as the fleet expands. But apparently, they’re trying to do it on the cheap. He said that the Navy cannot fund another environmental report unless someone else would do it for free — a hint suggesting it’s a reflection of broader Trumpian efforts to circumvent the power of Congress, which alone is empowered to spend public money.

“Improvements such as those proposed are usually made through the traditional Congressional budget process,” the comment letter notes. “By circumventing this, the Navy has effectively proposed a tax, a burden, on our local community through construction of a federal facility without the usual federal oversight.”

More pointedly, “We believe that the Navy has incorrectly defined its project,” the letter states. While it’s described as a commercial lease, “the real purpose of the project is to establish an additional fueling site for Navy ship,” and the lease is “just the mechanism for obtaining a funding source for upgrades to the fueling pier and pipelines.”

But even accepting the Navy’s definition, the environmental assessment is deficient. “There is no description of what the future commercial use would include and therefore, no assessment of the environmental impacts of the traffic, air emissions, hazard to adjacent homes, schools and youth recreation areas of such use can be made.”

Both federal and state environmental law “require the use of the commercial area to be environmentally assessed before the lease is awarded and before the EA (environmental assessment) is approved,” the letter points out, adding that “proponents are not allowed to stage their projects in a way that makes the approval of one aspect influence the consideration of the later portions”— a process known as “piecemealing.”

In the second Community Issues Committee meeting, the proposal was called “China Shipping on steroids,” a reference to POLA’s disastrously misguided effort to build a terminal without doing an environmental impact report, ultimately costing the port more than $50 million.

While the second proposed alternative, limited to the Navy’s Terminal Island property, would raise fewer concerns, the comment letter outlines three other alternatives to meet the Navy’s expanding refueling needs:

Proposed Alternative 3: Connect the Navy fuel pier directly to pipelines from area refiners.  Most likely, all the local refineries are already interconnected to the Navy lines

Proposed Alternative 5: The Navy should explore other possible ways of refueling such as delivery by barge, as is currently provided by several delivery firms in the port complex, or by the use of off-shore refueling booms

Collectively, this suite of alternative proposals shows just how inadequately the Navy has thought through what it is doing. Before it makes any more mistakes, some Congressional oversight would be warranted. The Navy is supposed to protect the American people, not endanger them.

“We want to be an honest broker, and a communication channel from the community to city government, federal govern