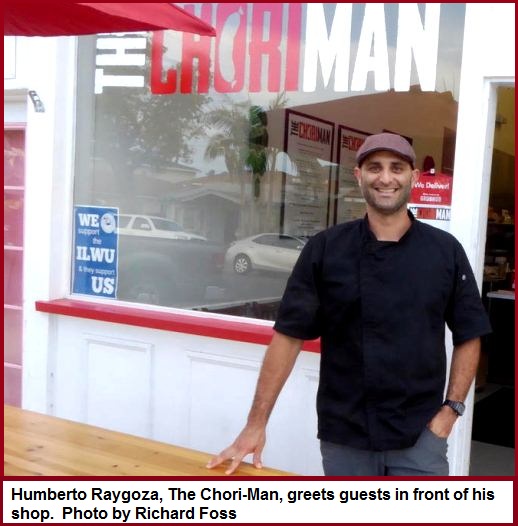 Humberto Raygoza talks about chorizo with the enthusiasm most people reserve for politics and sports. He started The Chori-Man in 2013, and less than two months ago opened a storefront in San Pedro. The little shop in a residential neighborhood is open only three days a week, but does a booming business selling burritos, tacos and sausage by the pound.

Richard Foss: Where in Mexico did you grow up, and how did you get into this business?
Humberto Raygoza: I was born and raised in Antelope Valley, but every summer I would spend a month with my grandparents in Mexico. My parents are from Zacatecas — my father’s side of the family is all butchers. As I got older the deal was that I would spend time with my dad’s side of the family, working in their butcher shops, and with my mom’s side of the family working in their poultry business.
I started making chorizo in my house in Culver City and walked the streets to sell it. I did that for a year and a half, and after eight months I landed my first big account, the Federal Bars in Long Beach and North Hollywood. A year after that I was invited to Crafted to do catering, and I have been in Crafted and Browerij West since 2015.

RF: How is your chorizo different from the stuff in supermarkets?
HR: When my grandparents and great-grandparents made chorizo, they used the meat that was left on the bones after the big pieces had been cut off. The big companies are making it with fillers like lymph nodes and glands that should be trashed. The stuff that we make is all from pork shoulder and picnic cuts.

RF: What about the seasoning?
HR: People grow different spices and peppers around Mexico, and everybody uses their own chiles, whether it’s pasillas, guajillos, negros, whichever. That means there are subtle differences wherever you go. The one thing you don’t find is chorizo that has the texture and seasoning that is most common [in the U.S]. If you look at the label of chorizos by the big companies, they name it Mexican, but there’s no actual region of Mexico where they eat a sausage exactly like that. Nobody seems to know where this style comes from. Try asking them and see what they tell you, if they even respond to the question. (I did call several commercial chorizo manufacturers. As of the time this article went to press none had responded.)

RF: What kinds of chorizo do you make now, and do you plan to expand your product line?
HR: I make Southern Mexican Toluqueño chorizo, a green chorizo with poblano and coriander, and also Zacatecan red. I also make two styles of Argentinean chorizo and one Sonoran, but those are exclusively for sale to restaurants. I’m practicing making new chorizos, and this is my test kitchen. I want to incorporate smoked chorizos… they only do that in one little region of Mexico, around Toluca, and their smoking techniques are a little rough.