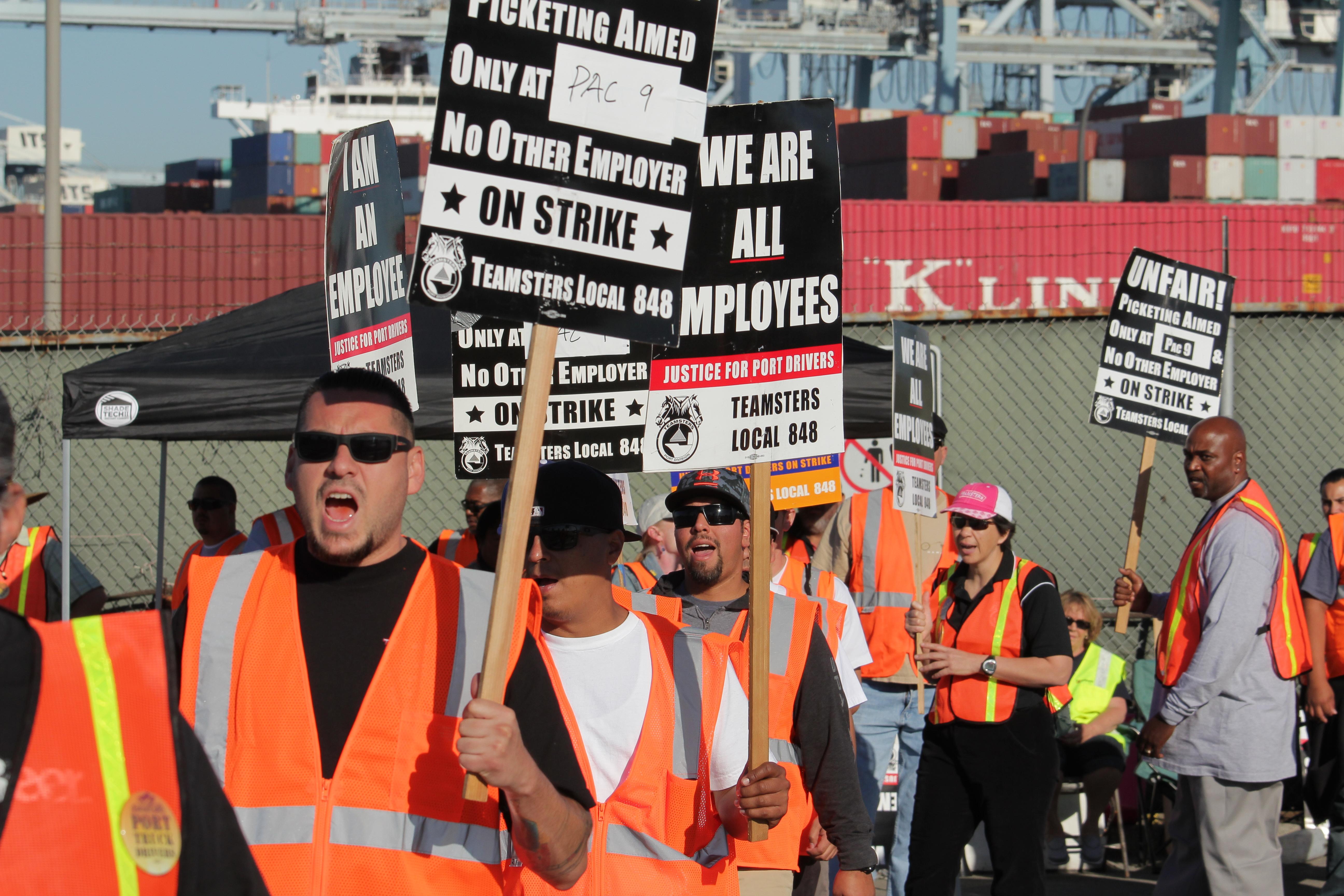 On the weekend of Aug.13, the Fight for 15 movement hosted its first national convention in Richmond, Va., the capital of the Confederate rebellion. The event drew more than 3,000 low-wage workers from around the country in a demonstration of the movement’s growing strength, vitality and ambition.

On Aug. 23, the National Labor Relations Board handed down a decision recognizing graduate students at Columbia University as workers with the right to form a union, reversing a 2004 Bush-era decision, and reinstating rights originally recognized in 2000.

These two actions — a national gathering of grassroots activists and a decision by the nation’s “Supreme Court” of labor law — underscore both the scope and the swiftness with which a new round of unconventional labor organizing has begun to alter the landscape of working America. It reverses decades of decline.

“Labor is definitely rethinking the way that they organize — from a traditional model, where it’s a high density as in manufacturing jobs, and moving over into exploring new terrain and new areas, and new industries which they can organize,” said Robert Nothoff,  director of the Don’t Waste LA campaign, and former director of the Raise the Wage campaign in Los Angeles and San Diego.

Here in California, those local successes have been followed by a statewide minimum wage rising to $15 per hour through 2022 for businesses with more than 25 employees and by 2023 for smaller firms. But raising the floor, even dramatically, hardly means there’s nothing left to be done, especially in the logistic sector connected to the local ports.

If anything, American labor history teaches us the exact opposite: There’s always more to be done, and complacency invites unpleasant surprises. First, it makes sense to focus on where the fire is hottest right now.

The Fight for 15 movement, backed by the Service Employees International Union, began in 2012 with just a few hundred fast food workers in New York City. They were striking for $15 an hour and union rights. Now, that fight has spread to more than 300 cities on six continents. It’s drawn together underpaid workers ranging from janitors, security officers and airport workers, to home-care and child-care workers and even adjunct professors with philosophy doctorate degrees. Its top achievements so far are the $15 an hour state minimum wages that California and New York are moving toward in the next few years.

Currently, 64 million Americans are paid less than $15 an hour, so the potential impact is obviously transformational. The inflation-adjusted minimum wage more than doubled from 1940 to 1968, and would have topped $16 an hour in 1996, if it had continued to rise at that same rate.

“Centuries of racism ingrained in the structure of our society and 40 years of corporate attacks on working families fighting for a decent life have left America without a strong middle class, but the workers of the Fight for $15 are starting to turn the tide,” SEIU President Mary Kay Henry told the convention in her keynote address. “This year, underpaid Americans will show elected leaders in every state in America that they are a voting bloc that cannot be ignored and will not be denied.”

The location in Richmond reflects the interrelated facts that poverty-wage jobs are concentrated in the South, disproportionately impacting black workers, and that municipal living wage laws passed in Southern cities have been quickly overridden by white-dominated state legislatures. Currently, 14 states have pre-empted both minimum wage and paid sick leave laws. Seven of them are in the South.

In Birmingham, Ala., which is 74 percent African-American, the city council approved a $10.10 an hour minimum wage this February, only to have it overturned by a majority white state legislature just two days later.

“We won a minimum wage increase in Kansas City just last summer, nearly doubled the minimum wage at the city level, only to have rich white Republicans in Jefferson City pass legislation to turn it down,” Wise told Think Progress. “You’ve got to see it for what it is: pure racism.”

In North Carolina,  the  Republicans were especially pernicious, hiding the anti-living wage legislation inside an attention-grabbing anti-transgender bathroom bill. As the Rev. William Barber, leader of the Moral Mondays movement, explained on Democracy Now! in April:

Section 2 denies a municipality or a city the ability to raise a living wage, require contractors to pay a living wage, to pay sick leave, to pay vacation and to have minority set-asides. So this is an anti-family, anti-labor, anti-worker bill, as well. In the third section, this bill disallows citizens of North Carolina from filing employment discrimination cases in state court. So this is a trick bill, and the transgender community is being used the same way black people were used in the past or Latino people. They are being scapegoated in order to pass all of these anti-poverty, anti-labor and anti-living wage parts of the bill.

The Moral Mondays movement was built on a profound awareness of how scapegoating has been used throughout history, and how fusion politics, bringing different dispossessed groups together, can fight back. Barber brought this perspective to the Fight for 15 convention, with his closing speech.

“In my home state, preachers white and black demanded moral language be in the new southern constitution [after the Civil War],” Barber said. “In fact, they wrote, ‘We hold these truths to be self-evident that all persons are created equal, endowed by their creator with certain inalienable rights, among which are life, liberty, the enjoyment of the fruit of your labor and the pursuit of happiness.’ Because they knew that labor without living wages was nothing but a pseudo form of slavery.”

The situation is not entirely dissimilar here in Southern California. As Nothoff pointed out, the coalition of groups involved in raising the minimum wage in Los Angeles  included the Restaurant Opportunity Center, the Black Workers Center, the Clean Carwash Campaign and a number different immigrant rights groups.

“When it comes to the minimum wage workforce, people of color and immigrants and women are disproportionately represented,” Nothoff said. “[So, when you raise the minimum wage] you are reducing the gender gap, you are reducing the wage gap for immigrants, for people of color, and for women, so it’s a fantastic thing. And again, the next stage moving forward is how you harmonize that energy and make sure that you’re continuing to drive at the bigger social causes.”

The struggles coming to fruition in Southern California today have an equally long history behind them, with similarly “absurd” ideas finally coming to be seen as common sense.

“The bulk of goods movement in the post-war era was related closely to manufacturing of durable goods [and] things like food,” explained Sheheryar Kaoosji, director of the Warehouse Workers Resource Center.

So the organizing of both truckers and warehouse workers occurred in the same framework as the building of industrial unions.

“By the ‘60s there was a master freight contract that pretty much every driver in the United States was paid a similar amount, had benefits, was treated like an employee, had decent conditions,” Kaoosji said. “Much of the warehousing in the United States, both related to manufacturing, but also distribution itself, was similarly organized by Teamsters and other unions.”

All this began to change in the 1970s, with the deregulation movement, especially the Motor Carrier Act of 1979.

“Deregulation of trucking basically allowed the cost controls that really were the basis of the good jobs in the trucking and warehousing sector to fall apart,” Kaoosji said. “It was basically a free-for-all, and the costs started rapidly declining, which led to a rapid decline in both unionization and in terms of treating truck drivers like employees.”

The independent contractor model, without any worker rights, took hold in the ports and across the country. In warehousing, staffing agencies arose to similarly deprive workers of their traditional rights.

While manufacturing declined nationwide, imports through the ports increased.

“We had well over 100,000 warehouse workers and well over 15,000 truck drivers at the ports, which … kept these industries from hollowing out the way [industries in] a lot of the Rustbelt was,” Kaoosji  said.

In this, they were like many other Southern California jobs, noted Barbara Maynard, spokeswoman for the Teamsters Justice for Port Drivers Campaign.

Such agencies are contracted by companies who hire them specifically to rid themselves of permanent employees and all the rights they would have.

“The same thing is true in hotels,” Maynard pointed out. “You go into a Ritz-Carlton, here you got a room that’s $500 or $700 a night, yet you’ve got people making minimum wage, no benefits, working just obscene workloads that lead to so many injuries — same thing. You go in there, there’s nobody who works for the Ritz-Carlton, or nobody who works for the owner of that hotel. It’s a myriad of staffing agencies.”

Such employment patterns have become increasingly widespread. But the contradictions are particularly sharp in the logistics industry.

Kaoosji pointed that the jobs related to the biggest influx of capital—mainly the $500 billion of freight that comes into the port every year are not good jobs.

“That’s why the focus of the Teamsters and related groups like the warehouse workers resource center has been to figure out how to change the conditions of those jobs through policy, [and] through organizing.”

It’s been a long, slow, hard process, but in the past year, two very significant NLRB rulings have come down.

In the Browning-Ferris case handed down in August 2015, the NLRB ruled that employees of a staffing agency, Leadpoint Business Services, who wanted to organize at a Browning-Ferris facility, were entitled to bargain directly with Browning-Ferris. In the Miller & Anderson case, decided on July 11, the NLRB ruled that employer consent was not required for a union to represent a combined bargaining unit of regular and temporary workers. As with the Columbia University decision, the Miller & Anderson decision overturned a 2004 Bush-era NLRB ruling and reinstated a 2000 ruling.

These and other NLRB rulings, combined with the California Labor Commissioner support of port truckers rights, signal a dramatic shift away from the neoliberal model, and back toward the original intent of American labor law— an intent to enshrine workers rights and protect their ability to earn a decent living.

The struggle to return to this vision takes on many forms, but the vision is simple: a just economy in the service of all.

Facebook
Twitter
Email
Print
Previous articleLee Rocker: From the Beginning to the New Blues Festival
Next articleExposing Injustice at the LA River